i've always been told that the human pop has been going steadily up and up (6E9 in 1999 i think). a site like this http://www.populationaction.org/ seems to support this.

now someone has told me this is all a lie by the elite to kill off large segments of the world. ok that's fine - i have no comment regarding the 2nd part, but is it a lie?

this site for instance http://www.pop.org/ says that over-population is a myth spread by alarmist scientists and there are several more sites like it.

anyone have the scoop on what the reality is?

While there may be some credible debate about the rate of growth or the problems we can expect due to overpopulation, the world's population is certainly growing.

Whenever you hear something is a myth spread by scientists, that is a pretty good indication that you have a flakey or crackpot source.
negitron
Science Advisor

It varies by region, too: 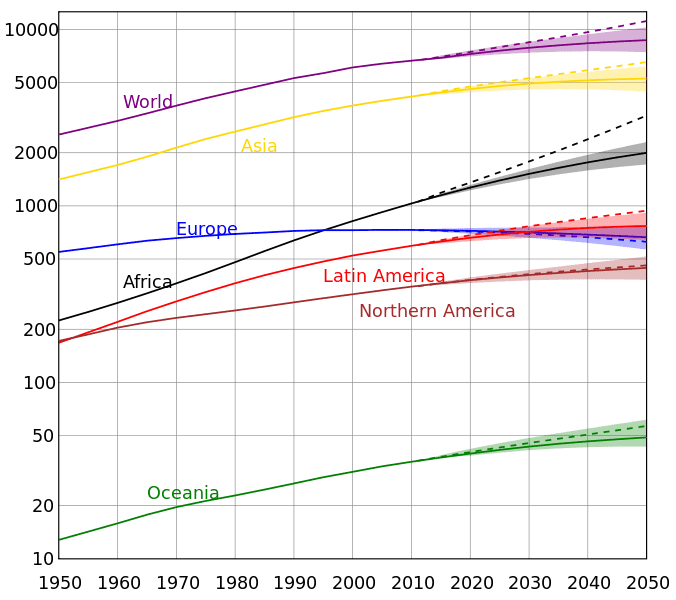 Note, particularly, that Europe's population has leveled off and is projected to be on a decline, while Africa's growth rate outstrips all others. However, the overall rate of growth has been steadily, if slowly, declining and the global population is projected to level off at around 10 billion sometime within the next 100 years.
Pengwuino
Gold Member

Ivan Seeking said:
Whenever you hear something is a myth spread by scientists, that is a pretty good indication that you have a flakey or crackpot source.

Or that an "elite" is attempting something extraordinary such as world-wide genocides without supplying equally extraordinary proof.
physicsisphirst

ok it seems there is no doubt about the growth so the stuff about the 'myth' is likely the biggest myth. however, how is it that the growth rate is declining? in both graphs, there is a tendency for decreasing slope
[itex] d^2P/dt^2 < 0 [/itex]

i can see it argued that in europe it will decline because they are better informed, more intelligent, have more access to contraceptives, have better things to do than produce offspring etc.

what would cause the growth rate to decline elsewhere? it would require similar levels of understanding and access, though not as widespread possibly? without these levels, humans will not just go forth and multiply, they will go forth and exponentiate just like rabbits and there can be only an increase of the growth rate.

Since we have moved beyond the initial debunking and into the reasons for the growth that we see, the thread is most appropriate for the Social Sciences forum.
AeroFunk

There is no doubt that the population is growing, but I don't see it as a problem. With modern technology, advances in agriculture, and capital accumulation, the world is capable of supporting a much greater population (and at a higher standard of living!) than in the past. This is a good thing, there are more souls in the world, more ideas, more innovation, more art, more labor. There is no objective, scientifically determinable "optimal" number of people who can be alive at any one time. Yes, people consume resources, but they also work to produce new resources and get more out of available resources.
Last edited by a moderator: May 4, 2017
Share:
Share

Why is there starvation in human populations?
4