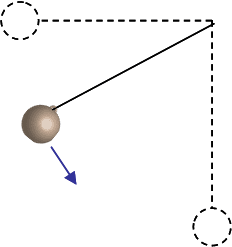 2) What is the magnitude of the tension in the string at the bottom of the path?
Calculated value 182.457 using T=mg+mv^2/r (correct)

3) If the maximum tension the string can take without breaking is Tmax = 509 N, what is the maximum mass that can be used? (Assuming that the mass is still released from the horizontal and swings down to its lowest point.)
Calculated value: 17.296 using a rearranged version of above formula: m= T/(g+v^2/r) (correct) 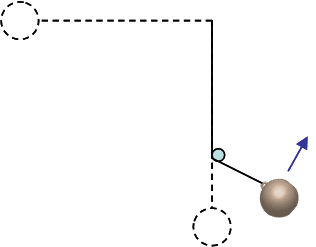 Now a peg is placed 4/5 of the way down the pendulum’s path so that when the mass falls to its vertical position it hits and wraps around the peg. As it wraps around the peg and attains its maximum height it ends a distance of 3/5 L below its starting point (or 2/5 L from its lowest point).
How fast is the mass moving at the top of its new path (directly above the peg)?

5) Using the original mass of m = 6.2 kg, what is the magnitude of the tension in the string at the top of the new path (directly above the peg)?

I have tried a few things using the new velocity, but I am not sure which values to keep and which to chuck at this point. Any pointers are helpful.
Last edited: May 20, 2014

After the string is in contact with the peg, you have a shorter pendulum with the peg as the pivot.

Part 5 is basically the same as part 2, except the signs are different.
CylonBaby

Phew! Thank you, finally figured out what I was doing wrong!