I have a house!

I finally bought another house. I closed on Monday, which is why you have once again not seen me around all week. No pictures yet. I took some the first day, but they're on my other computer and not yet uploaded to a site where I can share them. Besides, they are the "before" pictures. I'll have "after" pictures soon enough.

I spent this week getting two rooms redone from top to bottom. New paint, pulling up ugly carpet, putting down new laminate floors, installing new shelving in the closets, swapping all the outlets and switches from beige to white...my knees will NOT forgive me. I've also replaced doorknobs...the house had some cheap, ugly doorknobs, so rather than just get them re-keyed, I decided to get new knobs. Actually, I got the kind that have lever handles...what a wonderful thing those are when I have a handful of stuff! Installed shelving in another closet too. The bathroom has a new shower head on an adjustable bar now (the previous owners had the showers sized for giants...I had a hard time reaching the old shower head!). One more room will be painted this week before furniture gets moved in (maybe two rooms if I'm really fast and all goes well), then the decks get scrubbed and stained/treated whenever it stops raining, and I still need to replace the valve in one toilet and stop one bathroom sink from dripping (it just started today ). Also on the "to-do" list is to put in a new kitchen sink and faucet...currently, the kitchen sink is very shallow, and the faucet is probably the cheapest one made, so I will never be able to fit any big pots under that faucet. I found kitchen cabinets that match the ones I have, so another item on the list is to put in a peninsula on the wasted side of the kitchen to increase cabinet and counter space.

Anyway, the important news is I still have all my fingers. I have a few new power tools in my collection and thoroughly enjoyed using them.

I thought you lived inside a lab.

I rented Dark Knight on DVD.

You might want to wait until after I have a TV there...and furniture. I'm not moving any of that until this coming Friday. Though, there's plenty of room for everyone if they bring their sleeping bags. Even Ember is waiting until Friday to move there...she wants her couch and bed there before she moves.
Cyrus

Moonbear said:
You might want to wait until after I have a TV there...and furniture. I'm not moving any of that until this coming Friday. Though, there's plenty of room for everyone if they bring their sleeping bags. Even Ember is waiting until Friday to move there...she wants her couch and bed there before she moves.

You can't undo sleepover. Once sleepovers been called, its locked in stone.
mcknia07

I wanna be invited to the sleepover, too!!
Topher925

Well, okay, if you don't mind sleeping on floors, it's BYOP...bring your own pillow.
mcknia07

Woo Whooo!!!!!!!!!!!!!!!! PILLOW FIGHT! Get all the hotties to come to your place tonight
Math Is Hard
Staff Emeritus
Science Advisor
Gold Member

I have Jiffy Pop for the sleepover!

Jiffy Pop!! If you can stock up on Hula Hoops and Chubby Checker records, it's almost guaranteed that a party will break out. Twiss again, twiss again!
JasonRox
Homework Helper
Gold Member

I slept on a solid futon for the past 2 years. Sleeping on the floor is sometims more comfortable. I'll be fine. :P
Math Is Hard
Staff Emeritus
Science Advisor
Gold Member

turbo-1 said:
Jiffy Pop!! If you can stock up on Hula Hoops and Chubby Checker records, it's almost guaranteed that a party will break out. Twiss again, twiss again!

That reminds me. Someone needs to bring Twister.
Danger
Gold Member

Moonbear said:
my knees will NOT forgive me.

I'm sure it's not the first time that your knees have been worn out (need I mention 'The Clinic'?), but congrats on your new pad.
TheStatutoryApe

Knees can always be replaced I hear.
hypatia

Way to go Moonbear. You can have your own garden, with the extended growing season there, even if you plant by mid summer, you will get great veggies!
*Kia*
Gold Member


hypatia said:
Way to go Moonbear. You can have your own garden, with the extended growing season there, even if you plant by mid summer, you will get great veggies!

I think it's going to take more work than that. Not a lot of good topsoil in the yard for planting, so I need to bring some in. Before I do that, though, I want to scope out the natural drainage of the property (at least all this pouring rain is good for something) and make sure I don't put the soil where it's just going to get washed away again...or worse, send water in a direction that makes the neighbors unhappy. I think I have an idea where the water is flowing, though, and I think it'll make a nice stone path and plant on either side of it. But, I'm still deciding. I keep changing my mind about where I want to plant things and what I want the overall layout of the yard to be like. I'll probably just start small this year with a few tomato plants close to the house where there is some good soil, and as I spend more time in the yard, will decide where I really want things for next year. I do want to put in a small retaining wall to terrace a section close to the house to create a flat patio area...I'm still going to have to get some fill for that, but I'm not sure how much, since I need to remove some soil close to the house that is too close to the siding on two sides. I figure as I dig that out, I'll move it to the areas I want to build up, and then sort out the rest as I go. I also have a large pile of trees that need to be chopped up...I don't have a fireplace, otherwise it would be a wonderful pile of firewood, but it needs to have something done with it. I'm considering a firepit in the backyard would be a nice way to use the wood for those cool evenings. Or, I can always just give it away to people who do have fireplaces (in exchange for them cutting it up ). Though, I still need to take a close look at it and see if it's good wood or rotted. If it's rotted, then the best I can probably do is get someone in with a wood chipper and turn it into mulch to start a compost pile (or push it down the big hill into the empty lot behind me :uhh:).

Moonbear said:
I finally bought another house. I closed on Monday, ...

Congrats Moonbear! It sounds like you will have plenty to do for a long, long time.
turbo
Gold Member

I'm glad MB doesn't live too close. She'd be casting longing eyes on my tractor and visualizing dump-loads of topsoil and manure. BTW, I found a guy today (son of an old friend) who will deliver 14-yard loads of well-rotted (5-6 YO) cow manure for $200 delivered. Now, I'm trying to figure out where I could put it - I certainly do want it. 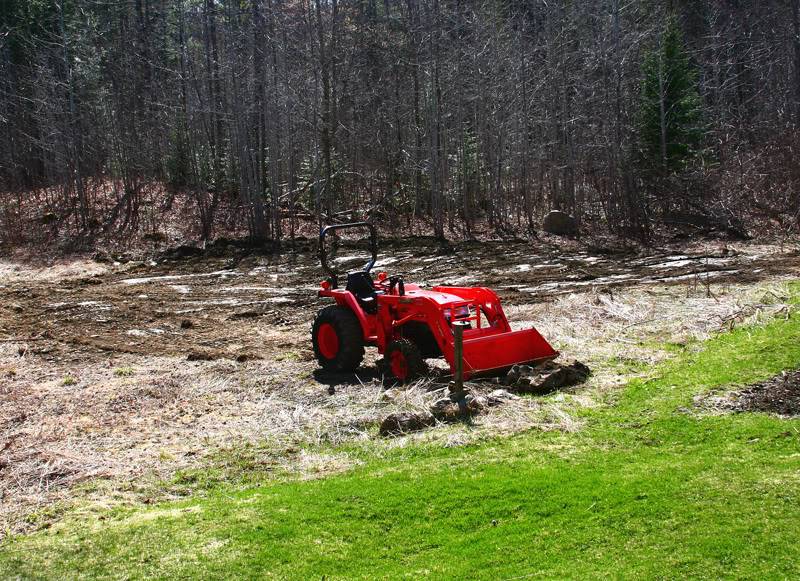 I always figured it made more sense to rent a tractor, rather than buy one, but then the local rental yard closed!

I'm guessing that set you back $25K plus implements?
turbo
Gold Member

Ivan Seeking said:
I always figured it made more sense to rent a tractor, rather than buy one, but then the local rental yard closed!

I'm guessing that set you back $25K plus implements?

Nope! Nice Kubota L2800 diesel with weighted industrial tires, block heater, brush guard, wired-in rear work-light, hydraulic 3-pt hitch, hydrostatic drive with rear PTO and loader = $18,000. The loader is the same one that they mount on the L3400 series, so it's plenty rugged. It goes from 2WD to 4WD with one control, and has 3 speed ranges and a manual accelerator lever so you can cruise down the road without keeping your foot on the heel-and-toe accelerator. I can rent or borrow attachments that use the PTO and 3-pt hitch as needed, and I have a neighbor who owns a nice old rear-mount grader blade that is too small for his huge Ford, but perfect for this tractor. He has told me to come get it if I want it.

I thought about renting as-needed, but transportation, delivery, and tight schedules to get needed work done nixed that idea. I have a very large back (not yet) lawn to develop, plus landscaping around the pond out back, plus building stone-walled raised-bed flower gardens and vegetable gardens on the front and side lawns. If I ever decide to sell the tractor, I will have gotten a lot of good use out of it, and I made sure to get one of the larger-framed models in demand by contractors and landscapers instead of a home-owner's version, so re-sale value will be high.

BTW, that's the out-the-door price with state sales tax, delivery, etc all taken care of plus a free on-site 50-hour service. All I pay for at that service is fluids and filters - labor, transportation, etc is all covered.
Last edited: May 4, 2009
Danger
Gold Member

turbo-1 said:
I found a guy today (son of an old friend) who will deliver 14-yard loads of well-rotted (5-6 YO) cow manure for $200 delivered. Now, I'm trying to figure out where I could put it

Having experienced Yankee fast food, I suggest that you open a burger stand.
Evo
Mentor

From It's a Wonderful Life -

Bread... that this house may never know hunger. Salt... that life may always have flavor. And wine... that joy and prosperity may reign forever.

Related Threads on I have a house!

Is it lucky to have a house like this?
3

I made a poster. I have to present it tomorrow for an open house.

I Just Bought a House!
2

A
What is the oldest thing you have in your house?
2

L
I closed on my house today!

You're building a house, and you want it to truly have a future-proof wiring system

I have a headache

I have a question