When I was a kid, sometime between 1965, and say, 1969, I saw a thing in the sky. It was a large, pink cloud, with a diameter of two to three times the moon, which became more purple over time. It was completely circular, with clear edge delineation. Later, bright lights approached and circled it. I remember the lights seemed to me to be aircraft, though the apparent distance was so great that no details could be made out. I saw this from New Orleans, in a generally eastern direction.

It was visible for at least an hour, and other people saw it. In fact, many others, because I found it so extraordinary that besides dragging my mother out to see it, I also bothered my neighbors to the same end. I stopped several cars, as well. Everyone was mystified.

I know it wasn't some sort of high altitude nuclear test; the last one I know of occurred on 11/1/62, when I would have been two years old. I remember the event way too clearly for that to have been what I saw. And yet, it's the best explanation I have for the appearance of what I saw. None of the adults I showed it to had an explanation, though all seemed uncomfortable. In remember thinking that their attitudes meant they were trying to protect me from a harsh truth, which, growing up with the bomb, made me think it was nuclear.

Finally, there was a photograph and an official explanation on the front page of the Times-Picayune the next day. What drives me crazy is that, I can't remember what that was, can't find anyone else who remembers, and can't track down the newspaper for that day.

Can anyone help me figure this out?

Perhaps it was a lenticular cloud:

It sounds like a lenticular cloud, near sunset. Lenticular clouds are responsible for lots of UFO reports. Here are a few licensed for creative commons usage. You can find much better ones with a google image search, but the better ones typically are labeled "all rights reserved". 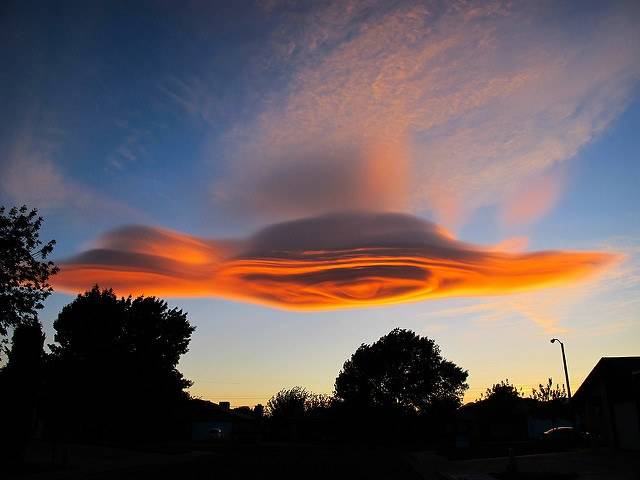 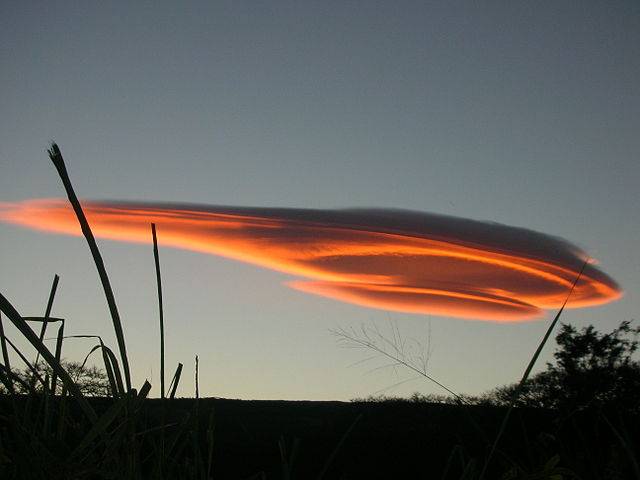 Those are pretty impressive.

I also liked this from the wiki:

Pilots of powered aircraft tend to avoid flying near lenticular clouds because of the turbulence of the rotor systems that accompany them, but glider pilots actively seek them out. The precise location of the rising air mass is fairly easy to predict from the orientation of the clouds. "Wave lift" of this kind is often very smooth and strong, and enables gliders to soar to remarkable altitudes and great distances. The current gliding world records for both distance (over 3,000 km; 1,864 mi) and altitude (15,460 m; 50,721 ft) were set using such lift.[2]

That seems like a crazy height/distance for a glider.
SteamKing
Staff Emeritus
Science Advisor
Homework Helper

I would contact the Times Picayune and ask them if they have microfilmed copies of their newspaper for the years 1965-1969. You could also try the New Orleans Public Library. I don't know if perhaps the microfilm might have been damaged or destroyed during Hurricane Katrina. If it was, perhaps the public libraries in nearby cities like Baton Rouge might have microfilm copies of the newspaper. You could also try the university libraries at Tulane, LSU, or the University of New Orleans. If all else fails, write a letter to the editor of the newspaper or see if you can get an item posted on nola.com asking if anyone remembers this incident.
Traz 0

jedishrfu said:
Perhaps it was a lenticular cloud:

Perhaps. My understanding is that lenticular clouds are normally associated with mountains, which we don't have in that region, but maybe ...

What I saw was about 45° off the horizon, and perfectly circular from my perspective. I've never seen photo of a LC that looked like that. Also, the colors changed over time, which I guess might occur with the changing position of the sun ...

I'm not sure I'm convinced, but thanks for the help anyhow, everyone ... :-)
MathJakob 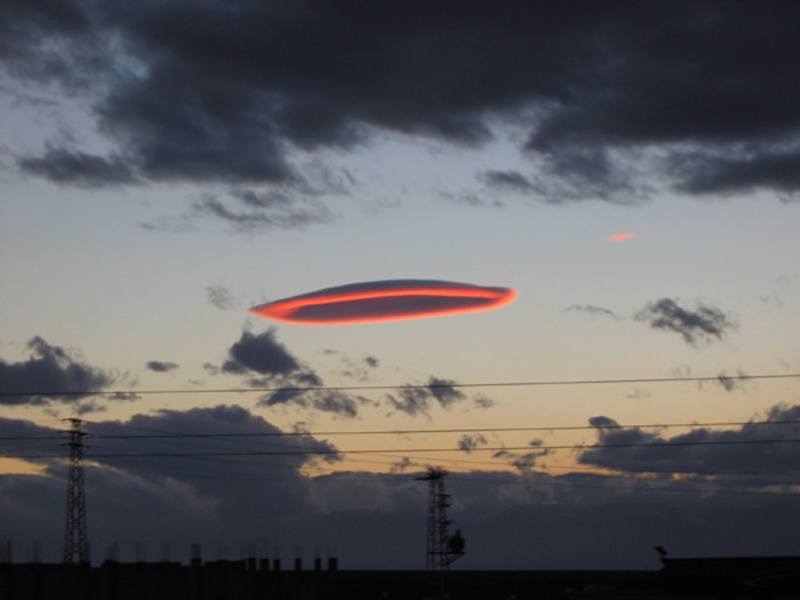 Student100 said:
That seems like a crazy height/distance for a glider.

Not if you have a big enough country (with big mountains) to fly in. Even in a small country the UK, with a lot of restrictions on use of airspace, gliders regularly reach 20,000 ft using wave lift from 1500 to 2000 ft high hills. The UK altitude record is about 35,000 ft.

Of course you need oxygen (and thermal underwear!) for sustained flights above about 10,000 ft.

Related Threads on I know it wasn't ET. What did I see?

What did I see?

Psssst, hey, did you see what I did?

N
Where did i see this thread?

M
It didn't make sense how physics was hard while math wasn't.

Anyone know what he did?

It wasn't me it was my brain

B
Did you know its a Programmer's day?

E
I didn't know that!

I finally got it. I finally know what women is thinking!
3