Here's a site that compares your opinions to the positions of the candidates.

I never heard of Johnson and I intend to vote for Romney.

I plan to vote for Obama.
Gale

This is really interesting! Thanks for the link.


I also don't know who Gary Johnson is, and I don't believe in voting.

Also interesting, I only agree with Obama on social issues, however I agree with Romney on Domestic policy, economic and immigration issues... And yet I have a higher match with Obama overall.

My results also change drastically when I adjust the slider regarding how important the issues are to me. Which, its difficult to say how important certain issues are... for instance, legalizing gay marriage is very near and dear to me, but if a candidate had excellent foreign policy and economic stances but refused to legalize gay marriage, I'd still be inclined to vote for him over a candidate that assured the public gay marriage would be legalized, but had shakier platforms in other areas.
OmCheeto
Gold Member

*wonders who Jill Stein is*

I wondered the same thing, so I checked what I matched on. Stein, Anderson & Johnson, all matched on social and environmental issues, primarily pro-choice and gay rights. Never heard of any of them and wouldn't vote for any them.
Greg Bernhardt
Admin
Insights Author

Jimmy Snyder said:
I never heard of Johnson and I intend to vote for Romney.

Perhaps you should find out who he is. You may be pleasantly surprised.

The results certainly fit my opinions on the diference between UK and US politics.

OTOH on the UK political scale I'm more or less a Thatcherite (i.e. to the right of all the current mainstream parties).
lisab
Staff Emeritus
Science Advisor
Gold Member

AlephZero said:
The results certainly fit my opinions on the diference between UK and US politics.

OTOH on the UK political scale I'm more or less a Thatcherite (i.e. to the right of all the current mainstream parties).

*wonders who Jill Stein is*

She went down from my list when I picked answers more carefully.
fluidistic
Gold Member

I think my stances on the death penalty and gun control nudged me a little to the right. About where I expected. Who's Jill Stein :|
Charmar

Pretty much as I expected.
SixNein
Gold Member

I liked this quiz, as I felt like *most* of the questions were fairly straightforward, or whatever. But there were a few where I almost wish I could pick more than one option, or an option only expressed part of my view.

Like, what's the difference between saying "Yes" to Do you believe the theory of Evolution?

and saying Yes, Evolution is a fact (the one I chose)?

anyways, I wasn't surprised by the results
Borek
Mentor

I don't think I am THAT green.

And I am not convinced all my answers really reflected my thoughts. Simple question ("do you support") about a complicated issue that I don't know details of is hard to answer - so I guess in some cases I would answer differently knowing what I am talking about.
Zarqon


Who you side with on issues is of course only a part of a voting decision. Another important part is who you think has the best capability of actually carrying out changes in the direction you want. If I was a US citizen, I would vote for Obama.
Astronuc
Staff Emeritus
Science Advisor

Some of the matches were incorrect. I chose more alternate stances than the Yes or No, so my agreement with Jill Stein (and possibly Obama) is less then 86%.

Who you side with by issue...

Not sure if they compare me to their rhetoric or their actual political actions. Either way, yeah; voting for Obama.

My first election ever I voted green party, was Nader at the time.
Ryan_m_b
Staff Emeritus
Science Advisor

AlephZero said:
The results certainly fit my opinions on the diference between UK and US politics.

OTOH on the UK political scale I'm more or less a Thatcherite (i.e. to the right of all the current mainstream parties).

That's interesting because I have a similar result to you but I am further to the left (although I despise this system of categorisation) of our current UK parties.

I need to go figure out who he is.

Edit: I checked up on him, and like his positions.
Last edited: Sep 10, 2012
mheslep
Gold Member

Johnson, ex governor of NM, made it into a couple of the Republican primary debates so the video should be around.
Greg Bernhardt
Admin
Insights Author

He's a horrible speaker though
saltkraxen

Not too surprisingly, I had already decided to vote for Jill Stein because my state is foregone conclusion. The party analysis is apt: I have come close to voting for Libertarians, but not Republicans.

[Edit: I register independent, consistent with the above - NOT in the sense of 'between' democrat and republican, but in the sense that I agree most with a variety of third party candidates. For me, this test seemed accurate - mainstream democrat and republican candidates were at the bottom, and all but one of the 3d party candidates were on top.]
Last edited: Sep 15, 2012
Pythagorean
Gold Member

Terrible stage presence though, they need an actor.
Czcibor

I'm a bit surprised that according to that pool if I were an American I should vote Obama. I considered myself rather right wing leaning. (though with huge amount of unorthodox ideas that that can outrage both right and left wing)

I also effectively stated - yes, global warming is real (as a scientific fact, though abused by left wing as excuse for silly ideas) but no problem with offshore drilling or looking for resources in natural preserve. Such stance made me a supporter of Greens. Controversial.

As non-American I consider asking for views on evolution as something odd for me. (However, because of crusades in Europe against nuclear power and GMO, I can't say, that on the my side of Atlantic people let science win with their gut feeling) 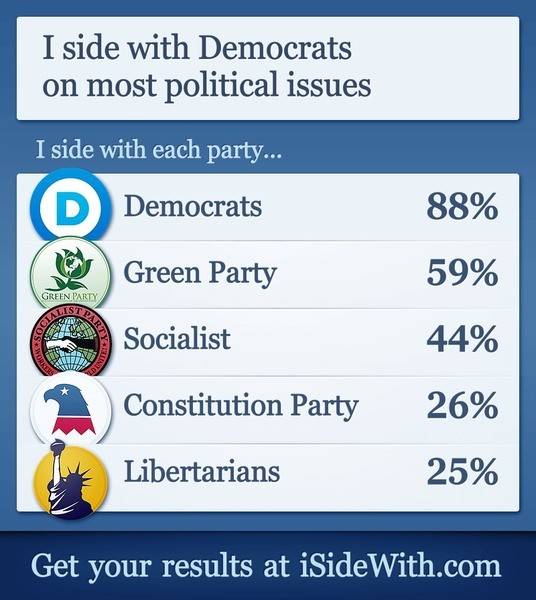 I'm a bit surprised that according to that pool if I were an American I should vote Obama. I considered myself rather right wing leaning. (though with huge amount of unorthodox ideas that that can outrage both right and left wing)

Suggested for: I side with

Cuban Missile Crisis, the Russian Side of the Story

What should I do with my spacetime model?

How do I make water fizzy without carbonation?

What kind of clothes should I avoid washing with very hot water?

I want to publish my book