I took these two pictures from http://jap.hu/electronic/codec.html. They are an 8-channel radio receiver and transmitter using a PIC microcontroller.

I'm about as green as you get with electronics. My greatest accomplishment so far has been using a car's ignition coil to make a spark across some copper wires. I'd like to build this, so would anyone be able to tell me - what are all the parts in the diagrams, and where can I get them?

Also, how could I make the circuits light up something that takes more power than an LED? 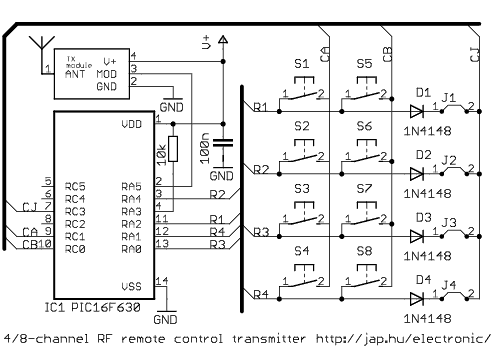 I marked some of the components.

However, the two microprocessors are programmed devices. This means they won't do anything unless you have them programmed.

So, you would have to return to the source to see if the chips were still available already programmed. This is where the programmer makes some money, because he can charge what the market would pay.

Also, how could I make the circuits light up something that takes more power than an LED?
You would use a transistor to drive a relay. But maybe try something a bit simpler first?
Last edited by a moderator: May 4, 2017
Share:
Share

J
How to identify the state variables of a circuit?.

H
Purpose of circuit components in this schematic

M
Please help me identify this electronic component in Camera

Voltage across components in a zero-current circuit