If you have an alternating voltage source in series with one inductor what happens? The book has a graph of the alternating voltage source and the current through the inductor. What I don't understand is how there is current in the inductor at t=0. If you look at how I solved the problem I provided initial conditions that makes the current 0 at t=0. The book solved it without initial conditions for some reason and obtained the voltage current relationship in the graph below.

I believe the book is just trying to demonstrate that the current will always come after the voltage in an AC inductor circuit but that doesn't explain why you would ever have negative current.

You have to flip the switch and turn on the circuit at some point and I believe my answer is what would happen.. 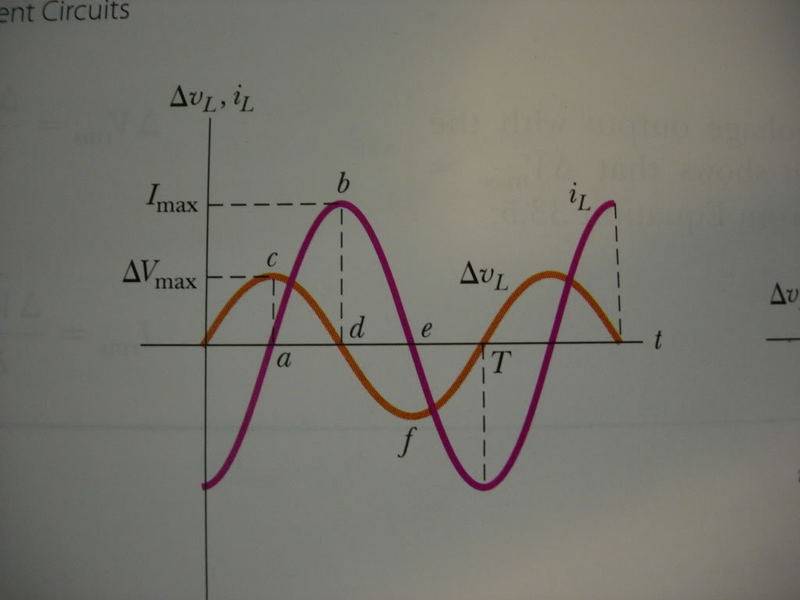 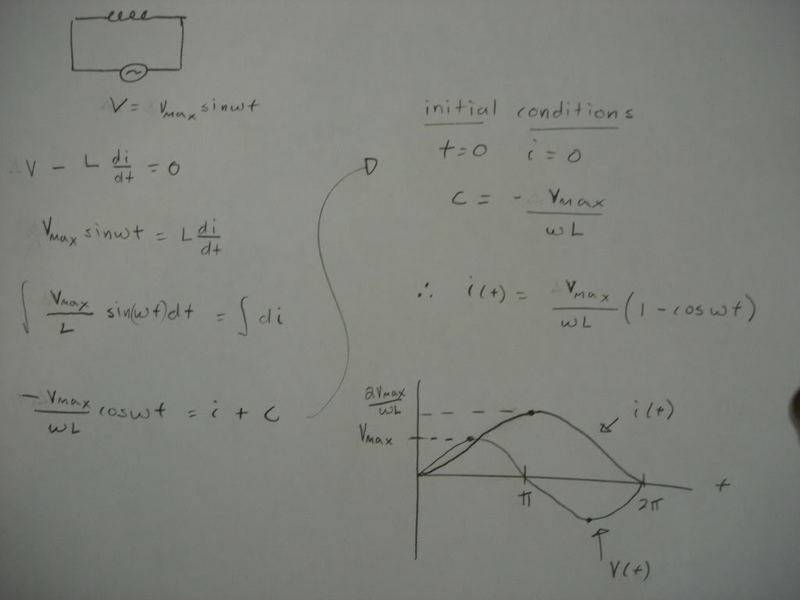 Inductors (and capacitors) are 'reactive' components in electrical circuits. This means that their behaviour depends on rate of change of a quantity rather than a value of voltage or current.
If you look at the graph you should see that V is a maximum when the rate of change of current (slope of current graph) is a maximum.
This means that the equations linking voltage and current are differential equations.

technician said:
Inductors (and capacitors) are 'reactive' components in electrical circuits. This means that their behaviour depends on rate of change of a quantity rather than a value of voltage or current.
If you look at the graph you should see that V is a maximum when the rate of change of current (slope of current graph) is a maximum.
This means that the equations linking voltage and current are differential equations.

I would say that at t=0 the rate of change of current = 0 therefore, at this instant, the V = 0.
These are instantaneous values and will change.
To find an expression for the voltage across the coil I start with I = Imax Sin(ωt)
Then E = -LdI/dt = - LωImax Cos(ωt)
Hope this links to your equations.
ehild
Homework Helper

The book shows the situation when the switch has been closed for some time.

With sinusoidal voltages/currents the voltage and current through a pure inductor will always be out of phase by 90 because V is proportional to the rate of change of current.
MotoPayton

ehild said:
The book shows the situation when the switch has been closed for some time.

So does this transient resemble the graph I obtained when setting current to 0 at t=0?

Why after a long time would it deviate from the graph I obtained? It seems that that solution works fine...
MotoPayton

technician said:
With sinusoidal voltages/currents the voltage and current through a pure inductor will always be out of phase by 90 because V is proportional to the rate of change of current.

I completely understand the difference in phase between current in voltage. It's the initial conditions that's confusing.
technician

Your graph does not show any transient behavior, it shows a continuos AC current and a continuous AC voltage.
Choosing when to have t =0 is arbitrary.I personally like to look at your graphs with t =0 at point 'a' because I like to write I = IMAX Sinwt
MotoPayton

So my particular solution would never occur in a circuit?
ehild
Homework Helper

Your result for the current would be true for a completely lossless circuit. But such one simply does not exist. An inductor is made of a wire coil: it has resistance. In case it is an ideal inductor (made from superconductor) the resistance of the source counts. The book shows a figure which is true for the voltage across and the current through an ideal inductor in a circuit that have losses.

The current you got never becomes negative. That means that you can have zero current at t=0 if there was a direct current flowing in the circuit before the source was switched on.
Assuming lossless circuits leads to untrue result which are against reality. Losses are always present. If it is not because of resistance, the loss can arise by radiation. The windings of the coil with the spaces between them serve as tiny capacitors, making the circuit a resonant one with very high own frequency. The circuit will radiate energy. Loss again, and extinction of the transient.

ehild said:
That means that you can have zero current at t=0 if there was a direct current flowing in the circuit before the source was switched on.

Your the man, but I'm confused by this.
MotoPayton

Also, what is in the math of the "general solution" that includes the "losses" of the circuit.
Where in the math is the resistance of the circuit coming in that gives rise to the steady state solution?
ehild
Homework Helper

MotoPayton said:
Your the man, but I'm confused by this.

I know. It is a hard problem, and confused me, too, when I was young. Accept that you do not use initial condition in an AC circuit.

If a resistor R connected in series, the general solution would look

I try to explain it tomorrow, I am too sleepy now...

I found this great link.

After line 75 in the link they write..

In this case the physical meaning of the constant of integration is a steady DC current, and
since there is no source for such a current in our system, the constant must be zero.

Can you explain that sentence when you wake up?
MotoPayton

Nvm, you actually all ready told me that.
MotoPayton

So there is the ideal case where the inductor is ideal and the current will reach a maximum as if there was no resistance. This is what they have in the book.

And then there is the superconducting case that I was trying to prove was right. In this case the current never goes negative and kind of floats above the x axis. Which you would need a superconductor to achieve.

And if you did want the current to stay above the x-axis in a real circuit you would need a DC supply to keep it positive.

I just needed a better feel for what resistance is.
thanks
ehild
Homework Helper

You did a good job while I was sleeping, congratulation! So you assumed a superconducting coil driven with an ideal source.

Having a closed loop of superconducting wire, and keeping it at appropriate low temperature, and starting current in it by a magnet from outside - just pushing the electrons a bit- the current will flow -not really forever- but so long that we can say that it never stops.
In case of real materials, all currents decay if there is no source to keep it flowing. The free electrons of the conductor gain some velocity in the electric field built up by the source, but loose it when colliding with the ions of the conductor or with the other electrons. Their excess energy adds then to the thermal energy, it increases the average energy of the particles in the conductor, which means increasing temperature.
So you need to know that there is some loss in every circuit, and it can be represented by a resistor. This resistor is connected in series with the coil in your circuit.

You have not run into this problem if you assumed that the generator voltage is Vmaxcos(ωt). This would mean a high current started by the generator at t=0, but this means an infinite dI/dt, that is a high counter-emf in the coil, which would allow zero current flowing initially, and a solution I=-Vmax/(ωL)sin(ωt).
Or even better, you could have used a current generator with current I=I(max)sin(ωt). Than the voltage across the inductor is simply VL=LdI/dt=Lωcos(ωt). No trouble with integration constant.

Now I outline the solution of the real case. I do not go into the details. You will learn them from Maths.

So you have an inductor L and a series resistor R and a source with emf Vmsin(ωt) (m means max).

If you substitute it for I in the homogeneous equation you will see that it is really a solution.

The next step is to find a particular solution of the original inhomogeneous equation. One method is guessing the form of the function using free parameters which you choose so that the function satisfies the equation.

Try to find the particular solution Ip in the form

and the general solution is

Let's investigate this function: The exponential term will decay after some time, and the current will oscillate with the frequency of the generator forever with the "stationary" AC current

where Imax is the amplitude and φ is the phase with respect to the generator voltage.

The voltage across the inductor is LdI/dT,

the voltage across the inductor leads he current by pi/2.

The current lags the generator voltage by pi/2.

Thanks for the help, hopefully someone else has that question because they're set.
Last edited: Nov 25, 2011
Share:
Share

N
An AC circuit w/ only an inductor

A
Inductors in an AC circuit

H
Inductor and bulb in an circuit