So I've decided to subject my little Suzuki Samurai to some home-spun garage surgery. Converting to a full sequential MPFI. (and doing a little porting along the way).
Now for the physics(ish) bit. See image of intake cutaway.
The blue arrow points to the sharp ('cut -off') trailing edge of the narrowing before the valve. Ignore the red writing. 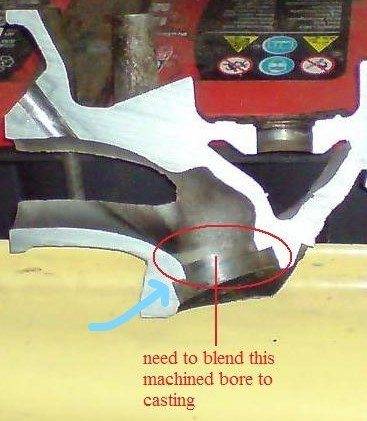 My understanding is that the narrowing should function as a Venturi, aiding in particular low-rev (i.e. day to day performance
- esp torque). I definitely want to retain this 'low-end' performance (hence simply grinding away the
constriction is not an option).
Regarding the treatment of the sharp edge - 2 options:
And no, I haven't run a CFD sim. I'd like to see what other people's aerodynamic instincts are.
Thanks all.

That sharp edge creates a low pressure zone around the circumference of the intake charge, which draws the flow away from the center of the stream. Its a good thing to have because it keeps the charge from hitting your intake valve and reflecting back at more of the charge that is coming. That ledge itself would also discourage flow reversion. With the small amount of information that I have right now, I can come up with no glaringly obvious room for improvement unless you want to change the power curve drastically.
Work Hard Play Hard

From a quick search I found on a samurai forum, port and polish the exhaust the best you can. For the intake it's as Rouge One said except to get rid of any obstructions from casting. Leave the edges and the rough surface. This is typical for most heads. Turbulence on the intake helps performance usually.
JBA
Science Advisor
Gold Member

One general reference that discusses in length the issue of air inlet port and valve design on the original Ford LeMans GT40 race car engines can be seen starting on pg. 47 of the below document about the design those cars.

The key to any port design is velocity of the intake charge.. The procedure is simple so DON'T get carried away... The ledge under the intake valve, looking back into the port, needs to be blended back into the bowl of the port..This blending can be taken out to the size of the intake valve seat insert, again, don't get carried away, don't take anymore material than needed.. The floor of the port where it turns to the intake valve needs to have a long gentle radius to it, no sharp turns or squared off edges.. Other than that the best thing you can do is remove any extra casting flash and sharp edges you can see in the port.. The same is true for the exhaust side, clean them up and don't get carried away.. If it looks choked down and restrictive, it probably is, blend it gently.. As for a finish on the port surface, leave it with a 80 or 120 grit sanding roll polish.. No need to spend hours and hours trying to get a mirror finish, it wont help you any great amount, the time invested does not pay back in your case.. A good valve job afterward and you'll be set assuming you're going to rebuild the bottom end also...
Rx7man

ON all the engines I've ported, I found I get the best gains by paying particular attention to the floor of the port.. you don't want ROUGH, you don't want CORNERS.. you don't want MIRROR finish either.. you want texture.. Ideally I would have some way to sandblast it to get a very fine texture.. just enough to create a boundary layer of stationary air without creating turbulence.
Without the willingness to give up a LITTLE bottom end torque, you'll never be able to make drastic improvements anywhere.. camshaft selection is also very important and affects what style of porting you can do.. you get a camshaft with longer duration, overlap, and lift, and a valve that doesn't flow, you won't make more power or torque.. It's also not useful to have a great flowing valve when the cam doesn't let it work.

On the exhaust side of it, you DO want the smoothest finish you have the patience to get, it reduces carbon buildup which in the long run is really going to hurt you if it's excessive.. you want to find any "walls" the gasses hit where pressure waves would get bounced back toward the valve and at least angle them so they direct that wave down the exhaust instead

This is a Cummins diesel 12V head.. intake is on the left and has a "swirl ramp". Not the large casting boss around the exhaust valve guide, this is one of those flat walls I'm talking about that would reflect waves back into the combustion chamber as well as the mismatched casting to valve seat. In this case the valve seat is also recessed into the head considerably. 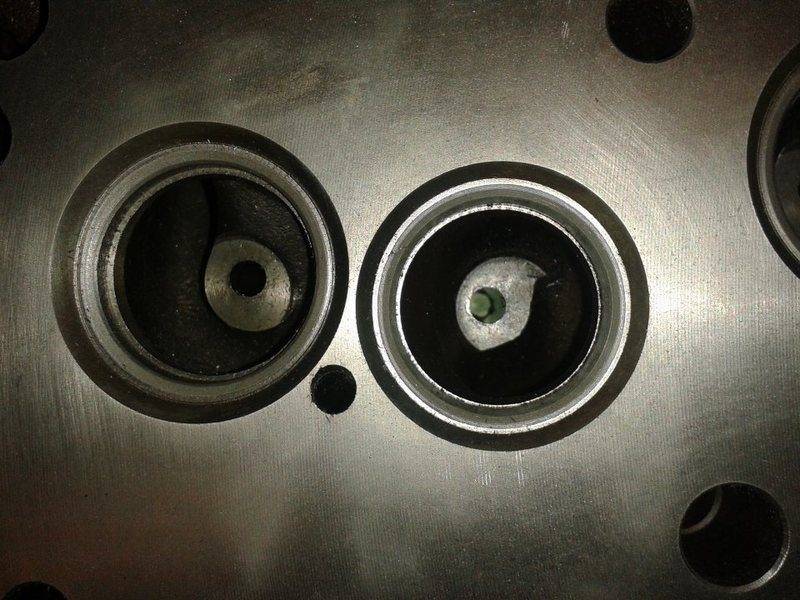 Now look at the finished head.. On the intake side I didn't do much more than blend the valve seat into the head casting, the valve seat boss got narrowed a little on the left side to not make it a "pinch point" in the flow, and the floor of the port got lowered and radiused so the air 'sticks' to the wall and acts more like an airfoil.
On the inside of the cylinder I reduced the angle where the valve recess is which helps low lift flow.
On the exhaust side you can see how I removed a lot of the valve guide boss so it doesn't have any flat area that reflects the pressure wave toward the valve, with the angle it has it directs that pressure wave down the exhaust instead 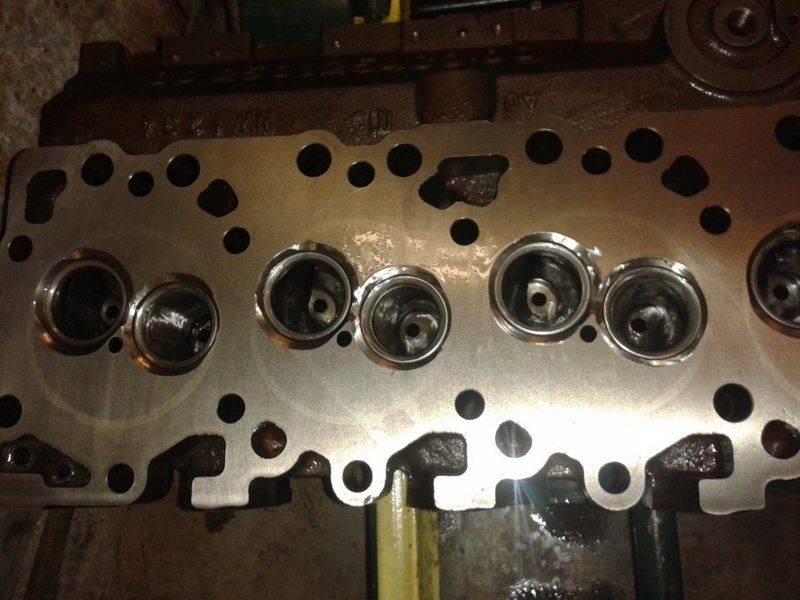 Here's another angle looking into the intake runner 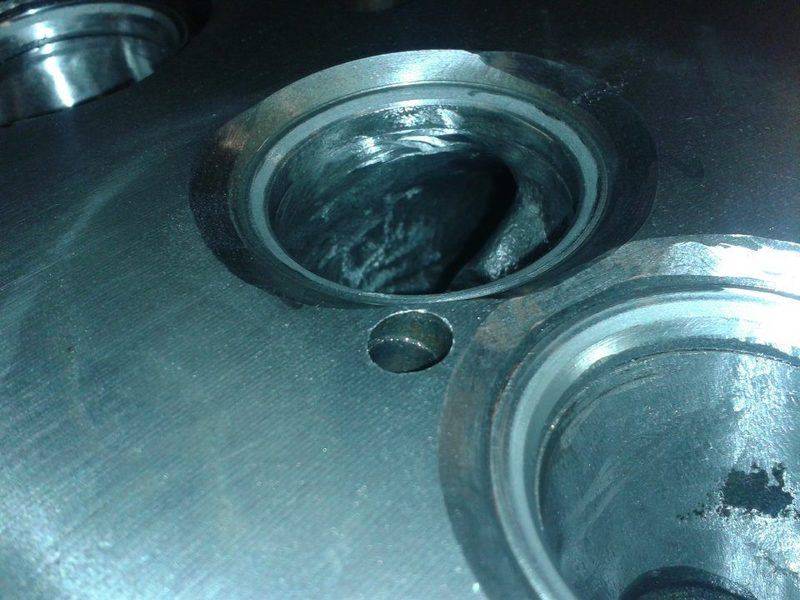 There are some differences between porting diesels and gas engines, but all the physics behind it stay the same
Log in or register to reply now!

Finding out the time duration for which intake valve remains open