sloughter said:
To suggest as you do that no new energy fields would develop in the next few decades to a century that would make hot fusion irrelevant is specious reasoning.

NOT AT ALL!! Evidently you evidently can NOT or won't do the calculation of how much energy
is available via hot fusion.

First - there's no such thing as "new energy". We know and can account for ALL the potential energy
sources. Some like nuclear fusion - we don't know how to tap yet - but we know how many atoms
of deuterium there are; and we know how much energy we can get from fusion.

You can calculate the energy potential. The fact that you make the specious arguments that you
do tells me that you have NOT done the calculation. You are either unwilling or unable to calculate
the true energy potential available - so you resort to nonsensical handwaving.

Yes - I know how much energy there are in storms like hurricanes. Did you actually "think" you
were telling me something I don't already know?

sloughter said:
L
The size of the deuterium/tritium particle is the size of a small piece of gravel. How precisely do you attach a "cable" to it? At or near absolute zero every metal behaves brittlely

OH BROTHER - don't you ever do any research before spouting off??
As usual - you don't know what you are talking about.

As for attaching a cable to a particle the size of a small piece of gravel - child's play. Have you
ever seen videos of how Intel and AMD make CPUs? The processors have these tiny, tiny, tiny,
little contacts WAY WAY smaller than a small piece of gravel - and a machine that acts like a
sewing machine connects those tiny little contacts to the upper end of the little pins on the bottom
of the die that holds the microchip with a slender gold thread.

You "think" there is a "problem" connecting a pea gravel sized pellet to a cable?
That has to be one of the dumbest responses I've seen on this forum.

Additionally, we won't be dealing with metals anywhere near absolute zero. The only component
that has to be extremely cold is the deuterium. The pellets may / may not have deuterium ice.

That plastic capsule is then encased in a hohlraum - little cylinder that the lasers heat in order to
generate the drive that implodes the capsule:

The hohlraum is the thing that needs to be attached to the cable - and it's not going to be near
absolute zero in temperature.

Additionally, who said the cable was going to be made out of metal?

Your "motis operandi" here seems to be to think up the dumbest way something can be done -
and then rail against how it won't work. Yes - the stuff you come up with won't work - but the
designs that people who know the physics will.

Sorry, I haven't been paying attention to this thread. We do not allow crackpottery here. In particular, crackpot sources of information, such as the referenced sites. Thread locked.

I've deleted crackpot and conspiracy theory posts and responses and reopened the thread. Apologies to those who lost time to deleted responses.

I was writing up my ideas for replacing Yucca mountain and I wrote that a fuel reprocessing facility should co-located with the storage facility and also an IFR to handle whatever can't be reprocessed. What exactly would be leftover after that? Would any of it have a long half life? How much waste would we talking about per TWH?

If you want to see what I wrote, use the link and go to section 2.
"[URL [Broken]
http://www.anupchurchchrestomathy.com/2009/06/upchurch-american-energy-act.html [Broken]
Last edited by a moderator: May 4, 2017
signerror

joelupchurch said:
How much waste would we talking about per TWH?

Since there is a one-to-one mass correspondence between fissile material and fission products (minus the tiny fraction of binding energy that is lost), there is a fixed ratio of the mass of fission products to energy generated, for each fissile isotope. For a U-238/Pu-239 closed cycle, it would be about 45 kg/TWh(thermal), where 199 MeV is the energy per fission of a Pu-239 nucleus, and the TWh is of heat produced (not electricity). So for a 50% efficient high-temperature reactor (say), it would 90 kg/TWh(electricity).

So this is the absolute minimum spent fuel waste for any fission reactor. A fast reactor with full reprocessing (like the IFR system) would come close to this.

In an ordinary once-through reactor, there is a lot more waste. For example, the new French EPRs have a (design) burnup of 70 GW-days per ton fuel, which corresponds to spent fuel mass of 595 kg/TWh(thermal) or 1,653 kg/TWh(electric) (so, 26 tons/year). But only a small fraction of this is fission products, corresponding to the same mass fraction which was fissioned (about what, 5%?). The rest is mostly harmless U-238, and a tiny fraction of synthetic actinides created by neutron capture (Pu-239 and beyond). So with full reprocessing and MOX fuel burning (as the French do), the once-through light water reactors produce about the same mass of high-level waste as fast reactors - although since it has a much larger amount of transuranic isotopes, it is much longer-lived.

I hope the experts here will correct me if I've misunderstood something.
joelupchurch

I obviously don't understand. What I read is that 95% of the spent fuel is Uranium or Plutonium and all those isotopes are fissile or fertile and can be reused. Most of the rest is actinides that can be burned in an IFR. It looks to me like the only thing that needs to be disposed of are the actual fission products, but it isn't clear what those products are and how long they are dangerous.

From what I read on the LFTR, it looked like you could get a GWe Year out of 1 ton of Thorium, so the actual waste product would be 1 ton or less. I was hoping to get a similar result with uranium, albeit with more hassle.

From what I read about spent fuel, they amount to about 1 ounce per person per year, so I was hoping to get it down to a couple of grams a year using all the technology available.
signerror

joelupchurch said:
From what I read on the LFTR, it looked like you could get a GWe Year out of 1 ton of Thorium, so the actual waste product would be 1 ton or less.


It looks to me like the only thing that needs to be disposed of are the actual fission products, but it isn't clear what those products are and how long they are dangerous. 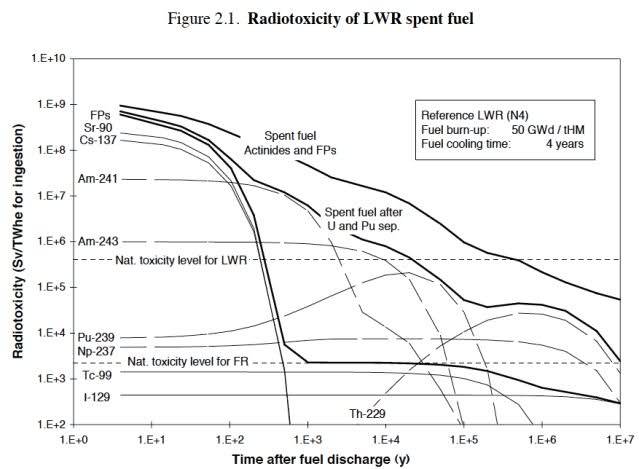 The third bold line is fission products (FPs). The individual examples shown are Strontium-90, Cesium-137, Technetium-99, and Iodine-129.
Last edited by a moderator: May 4, 2017
joelupchurch

Thanks signerror, I like the graph. It looks like most of the fission products are safe in 400-500 years, but there are some long half-life isotopes that need to be separated out and handled differently.

That would mean that each fuel recycling would produce some fission products that need to separated and stored. I guess one ton a year for a GWe electrical plant isn't too bad.

I calculated what a GWe coal plant would put out per year and came out with over 7 megatons of CO2 and 600 to 700 kilotons of other waste, including 12 tons of thorium and 5 tons of uranium.
Log in or register to reply now!

SLOWFAST, reactor being both slow and fast

What is measured in a fast reactor for power calculation : fast neutron flux or