I understand that due to the geometry of the CO2 molecule it ends up have no net dipole moment. But why doesn't the central carbon atom experience intermolecular forces from the oxygen atoms of other CO2 molecules. What I mean is why can't CO2 form an arrangement where the dipole forces still play a role?
I have attached a drawing of what I think this would look like. 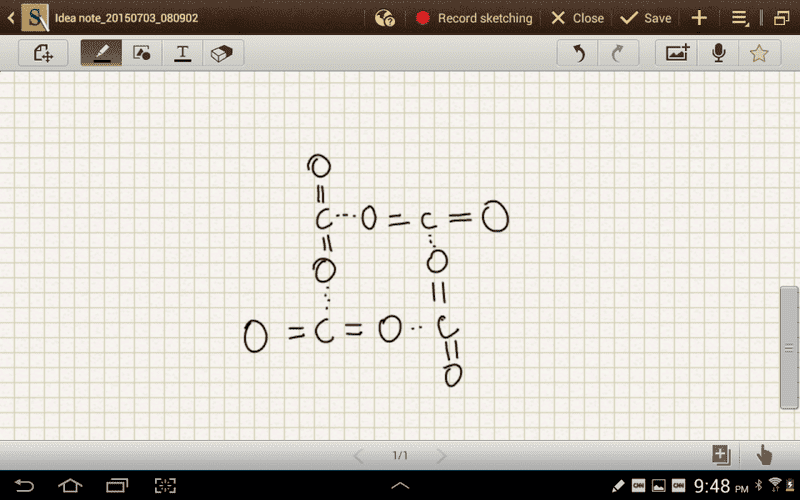 That's more or less how the molecules are arranged in the solid carbon dioxide.
UMath1

Then why is it said that CO2 molecules only have Van der Waals forces. If the molecules are arranged that way, doesn't it indicate the oresence of dipole dipole forces?
DrDu
Science Advisor

This is what my textbook, Zumdahl Chemistry, says: 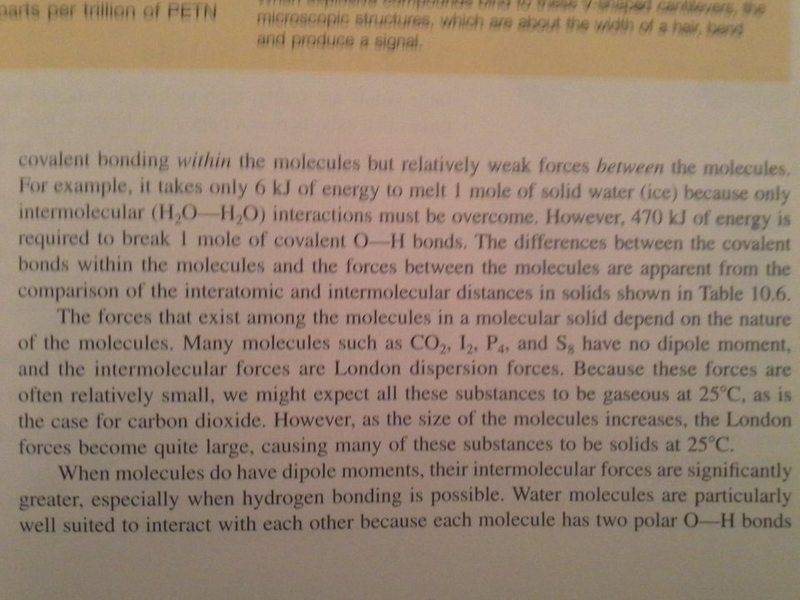 It makes no mention of the quadrupole interactions and says the only forces present are London Dispersion.
DrDu
Science Advisor

So there are indeed quadrupole forces which make the intermolecular forces in CO2 stronger than a diatomic molecule like say O2?
DrDu
Science Advisor

Yes, although O2 has a weak permanent quadrupole moment, too. For these multipole moments to be absent completely, you need spherical particles like noble gas atoms.
UMath1

How does O2 have a quadrupole moment?
DrDu
Science Advisor

Why not? There is some negative charge accumulating in the bonding region and corresponding positive charge on the oxygens.

PS: Just looked it up. The quadrupole moment of oxygen is 14 times smaller than the one of CO2.
Ygggdrasil
Science Advisor
Insights Author
Gold Member
2019 Award

My guess is that the author of that book confused "van der Waals interactions" (=*any* weak interaction, including residual forces between static multipoles) with "London dispersion force" (one of the many sources of weak interactions, between dynamic multipoles). CO2 certainly does have static quadrupole-quadrupole interactions. Exact quantitative sizes are very hard to estimate. Could be anything, and would need explicit calculation to compare with the dispersion forces. Such calculations can be done (with DFT-SAPT, for example), but are entirely trivial to set up.
DrDu
Science Advisor

I don't thini it is so hard to estimate. The quadrupole moments and polarisability of CO2 is known from experiment which allows in principle to calculate the forces, or at very least, to estimate their relative size.
UMath1

Actually I wanted to ask just that. It seems as if the London forces are stronger than Quadrupole forces because CSe2 has a much higher boiling point than CO2. Although CO2 would likely experience a stronger quadrupole force because of the higher electronegativity difference.
UMath1

UMath1 said:
Actually I wanted to ask just that. It seems as if the London forces are stronger than Quadrupole forces because CSe2 has a much higher boiling point than CO2. Although CO2 would likely experience a stronger quadrupole force because of the higher electronegativity difference.

Yes, but CSe2 has also a much higher polarisability than CO2. Hence, dispersion forces are also stronger than in the case of CO2.
UMath1

Why NCl3 is dipole-dipole in intermolecular force?

Why does hydrogen is taken specially in intermolecular forces?