I'm trying to make a simple ion thruster that will be used in a science fair so I'm not concerned about its efficiency but just creating at least some thrust. However I wanted to make it as close as reality as possible, using every component and respecting its details if possib

Ion thrusters use 2 electron guns, and this is when I came across those electron guns used in CRTs inside old monitors and televisions. However, I don't know if they are suitable for this task. If not, are there another alternatives for the electron guns?

That sounds very ambitious and exciting. I hope you succeed.

Ions are much more massive than electrons. An electron gun is not an ion gun, so don't confuse the two.

A Google search for DIY ion thruster finds many hits. However, most of those are not useful. One that does sound real is this

http://lae.mit.edu/2013/04/03/ehd/
In those cases, the device did not try to levitate itself, but rather to create a wind of ionized air. The wind current could make some bits of paper move to demonstrate nonzero thrust.

So, first see if you can understand those articles. Then, I would recommend that you try to contact the MIT professor Steven Barrett mentioned in the article and talk to him about doing it as a science fair project.

However, be aware that even that project requires some high voltages. You can do that safely only with the supervision of a mentor or adviser with you face-to-face, not by asking strangers on the Internet. We do not discuss dangerous topics on PF, so if this thread goes in a dangerous direction, we may have to close it.
Rive

One could simulate thrusters, even build a scale model depending on the rules and education level of the science fair.

Radiometers are evacuated glass bulbs with a rotor with four vanes mounted on a spindle. Each vane has a dark absorbing side and a white or silver reflecting side.

Simulate the ion engines with a device that emits infra-red (IR) and/or visible light. Not sure if CRTs are the proper device. Perhaps you could rig an IR source. A carbon rod arc-light with an IR filter certainly works but may be over-kill and requires adult supervision. Would laser pointers work?

Aim your simulated engine at the radiometer to simulate thrust by spinning the rotor. 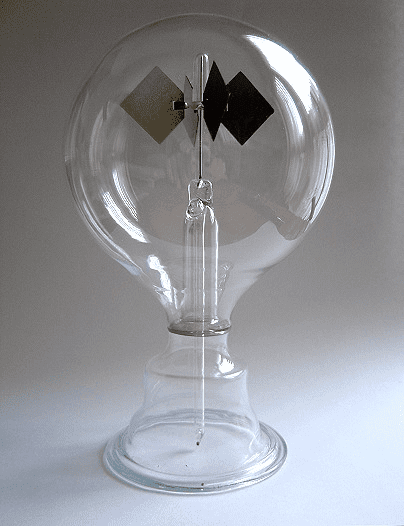 For extra credit the OP could explain how Crookes radiometers work.
Xforce

Does it make sense just to make an air-breathing electric engine using MHD? Your ion engines are not working in a vacuum chamber by the way
Share:
Share

Why don't ion thrusters work within the atmosphere?

S
How many years until Ion Plasma thrusters are used on space ships?

A
A rail gun as a thruster

A New Thruster Based on Fusion

Passion for aviation, where to start? A high school student