Is it possible to power a freight train with an animal motor?

The question is whether freight could be hauled along train tracks using only beasts of burden as a power source. My first ideas of a design involved tying, say, horses, to a belt which would drive a shaft, and, through simple gearing, provide power to push the train forward.

The first few pieces of information that I have are that a horse can be expected to express, naturally, one horsepower over reasonable amounts of time, and that a single railcar weighs 30 tons. Initially, I was looking into the breaking the static friction of steel-on-steel, but the whole point of wheeled systems is that you don't have to do that. It became clear that the significant numbers, which I have no idea how to obtain, are the component pieces of the overall friction of a freight car, predominantly, I would think, the friction of the greased axles. The deformation of the wheel and track would also sap some power, as would the friction in the gear train set up to power it.

I am skirting the edge of my understanding of kinematics and friction, and am squarely out of my depth in engineering.

Also, this is my first post in this forum, so if I have in some way violated a rule, I apologize in advance. Otherwise, I thank you all for your consideration and input.

Gear it low enough and you can move practically anything. Or so my dad says.
Mudbungie

Right, you could gear down to break static friction, but that doesn't speak to whether or not you could functionally move a train. Since locomotives are notorious for their long periods of acceleration, I would pretty much ignore the speeding up and gearing down process. The question is, with, say, 100 horsepower, how heavy a train could you move at a reasonable speed (say 10 miles per hour), given the internal friction of trains on tracks?
Last edited: Oct 31, 2012
Drakkith
Staff Emeritus
Science Advisor

Forget gearing, just do it the way actual trains do. Use your thousands of horses to power electric generators. Then use the electricity to run electric motors on the wheels.
256bits
Gold Member

Well you would need a lot of horses and that would pretty much be a train length in itself.
If one uses a size of horse that can supply 1 hp, and that horse typically weighs 1000 pounds, then for a switcher 'horse' locomotive of 360 hp, you would need 360 horses.
If horses are spaced 3 abreast and 10 foot intervals for each triplet, then you are looking at a switcher locomotive of weight 180 ton, ( normal switcher is about 40 ton ) and about 1200 feet in length.

By the way, an empty railway car is around 30 ton. A full car can be upwards of 100 ton.
AJ Bentley

Why mess about with horses? Use elephants.
Or even better, one of the sand worms from 'Dune'.
sophiecentaur
Science Advisor
Gold Member
2020 Award

The answer to this will depend upon the precise details of the situation, in particular, the gradient of the track, friction and how fast you want to go. A single horse (or even a man, briefly) could manouever a 100 tonne barge on a canal at a steady couple of km/hr but that's level, of course, and the resistance is very low at low speeds.
The power needed is force time velocity so all you need to do is to slip in some likely values to find the answer. The World's Strongest Man contestants can get a jet airliner moving along a runway - slowly - but the tyre friction will be higher than for steel wheels and steel rails, I expect.
So many variables. . . . .
jtbell
Mentor

Mudbungie said:
The question is whether freight could be hauled along train tracks using only beasts of burden as a power source.

Been there, done that. See for example the Granite Railway in Milton, Massachusetts, c. 1855: 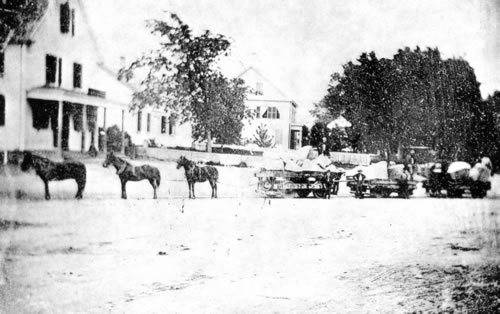 Talk about beating a dead horse...

jtbell said:
Been there, done that. See for example the Granite Railway in Milton, Massachusetts, c. 1855:

In my Walter Mitty-cum-Harry Potter daydreams, I magically convert the 500+ hp engine of the idiot who nearly brushed me and several others into a 500+ hp (hamster power) engine, replete with lots of cute little tunnels and geared-down hamster wheels so those 500+ hamsters can make that car move. Slowly.
maimonides

As jtbell points out, some of the first railroads started with animal traction, at least in Europe.
http://en.wikipedia.org/wiki/Saint-Étienne_to_Andrézieux_Railway
http://de.wikipedia.org/wiki/Pferdeeisenbahn_Budweis–Linz–Gmunden
(sorry, no English version available).
Steam locomotives soon turned out to be superior in most respects.
phyzguy
Science Advisor

One way to look at it is to ask how fast you could go up hill. I think moving on the level is not the problem - like someone said if you gear it low enough and accelerate slowly you can move almost anything. But railroad tracks are rarely perfectly flat. So suppose you had 10 horses trying to pull 10 railroad cars up a 2% grade - how fast could they go? So if m = 300 tons = 3E5 kg, and P = 10 hp = 7.5E3 Watts, then:

Related Threads on Is it possible to power a freight train with an animal motor?

Is it possible to impart a moment with soundwaves?

D
What does power have to do with the speed calculations of a Train?
2

G
Is it possible to identify something with sound?

D
Is it possible to split water with sound wave?

S
Is it possible to solve spring questions with Calculus?

Is it possible to calculate pressure without a barometer?

Is it possible to generate lift without thrust?

Is it possible for human powered hot air balloon?