I just searched the forum for discussions about this game but, apart from one of the developers asking a question about astrophysics, I found nothing.

The game, in a nutshell, is a rocket-building game with a full-featured orbital mechanics simulator integrated. Right now it's in alpha-stage development and is just a sandbox-style game; design your rocket(s) and plan/execute your own missions. This includes everything from sub-orbital flights with a nice parachute-slowed splashdown to crew-lander-dropping skycrane maneuvers on one of the two currently-available moons!

Here's a picture of a skycrane I built dropping a rover I designed near a lunar arch formation. 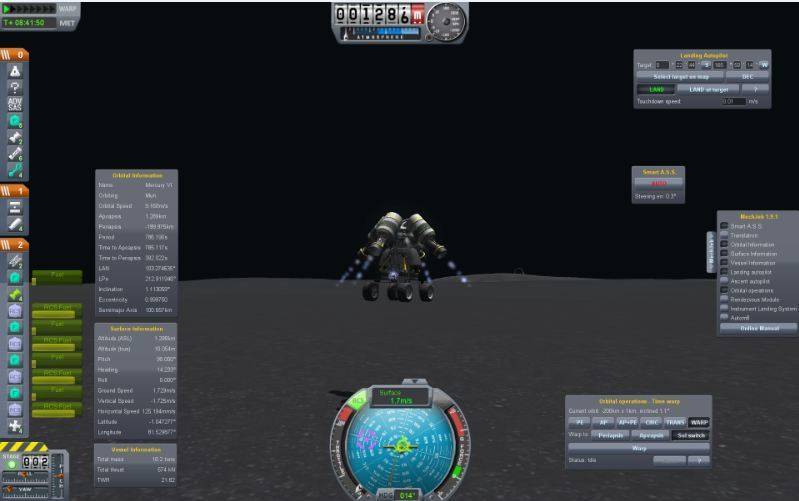 As a side note, the first moon is called "Mun" and the second, smaller moon, is called "Minmus."

The game is addictive, fantastic, and well worth the current $18 price tag. I'm not at all affiliated with the design group, and I don't get anything for pushing the game. I'm just hoping someone else will be introduced to the game and will love it as much as I do!

Also, all rights belong to the design group. My screenshot also shows some third-party parts including the MechJeb autopilot system.

I'm guessing this is not a game for a layman?
FlexGunship
Gold Member

Greg Bernhardt said:
I'm guessing this is not a game for a layman?

There's a steep learning curve, to be sure, but it is definitely a game. The rigors of rocket control are largely simplified and autopilot plugins simplify orbital mechanics further. Yes, your rocket will keel over and break in half (or explode) without proper control, but you can install an advance stability augmentation system and some RCS thrusters and let it stabilize itself.

There's a demo available, but it's simply an older version of the game and contains fewer features and less third-party support.

You can certainly slap a parachute on a capsule on a decoupler on a tank of fuel on a rocket engine and make a brief EVA within the first 15 or 20 minutes of playing the game. You get to choose your own difficulty in a way.

Here's an image of an early failure. Before I knew much of anything I could ALMOST fall to the Mun safely.

Wow that seems pretty cool. I once wrote a program to simulate reentry. Will be nice to see some pictures instead. Thankyou for sharing.
Share:
Share