anyone know what the metal fin-like structures are? 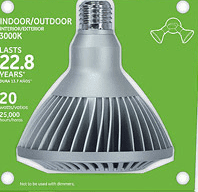 i see these on alot of LED bulbs. they look like heat sinks but if conventional bulbs don't need heat sinks why would an LED bulb need one? besides! i thought the conductivity of semiconductors was proportional to temp.

A conventional bulb is little more than a hot wire in a glass tube. It is not sensitive to heat. They have almost no similarities to an LED except that they both produce light.
Baluncore
Science Advisor
2019 Award

The fins are for cooling, higher temperatures are a problem because;

1. LED light output is reduced.
2. The lifetime of LEDs is determined by diffusion within the semiconductor.

So better cooling has a double advantage.
jsgruszynski

These are cooling fins. The link in this phys forum about "How do LEDs get old" shows the reasons why cooling matter.
RBTO

In the case of an incandescent lamp, temperature of the filament is everything. It needs to run hot in order to produce light. Keeping the heat energy produced by a current running through a resistance is desirable since the more energy retained, the less power needed to heat the filament to its desired temperature (around 2500 K depending on the lamp). There does need to be a heat loss mechanism however to stabilize the filament temperature. Otherwise, its temperature would continue to rise as more electrical power is dissipated, and at some point, it would melt. A bulb with a partial vacuum serves this purpose, plus it prevents oxygen from reaching the hot filament which would destroy it through oxidation.

In the case of an LED, somewhat more of the electrical energy goes to visible light than with an incandescent device, however, there is still a portion which transforms to heat. Heat is detrimental and not at all desirable for an LED so there needs to be a means to get rid of as much of it as possible, hence the fins. To produce an equal number of lumens (i.e., light) as an incandescent, the LED requires less power, but it is not 100% efficient at converting that to light, so a cooling mechanism is always needed. For small, instrument type LEDs (with milliwatts of power), just the package accomplishes this, but for lighting LEDs where watts are involved, it has to be facilitated with a heat sink which can transfer the heat to the surrounding air. At high altitudes (or in a vacuum) this transfer may not be as efficient, and if some other means of cooling is not provided, LEDs can self-destruct.
Incnis Mrsi


RBTO said:
There does need to be a heat loss mechanism however to stabilize the filament temperature. Otherwise, its temperature would continue to rise as more electrical power is dissipated, and at some point, it would melt. A bulb with a partial vacuum serves this purpose…

You misunderstand why vacuum bulbs came out of fashion. You don’t need any non-radiative heat sink to maintain equilibrium; thermal radiation is sufficient for it. Vacuum has another disadvantage: it permits tungsten to evaporate too quickly.
Last edited: Sep 6, 2014
You must log in or register to reply here.

How to repair Led Bulb

How to change bulbs to LEDs