I am working on a project on my final project in Product design. The project is about translating digital concept into the analogue world. In my project I am especially interested in the digital “Windows” and am trying to apply the functions and possibilities of digital on to analogue windows. Among other things I would like to recreate the “Zoom in Function” of digital windows on physical windows and therefore create the possibility to be able to actively change your view (see Visualization attached)

I am experimenting now with adjustable liquid lenses. My problem is that the lens is turning the image around for far away objects. I read that I could use a PENTAPRISM to turn the image around?! Could I also achieve this by using another shaped lens?

May you have some advice or tips how such a lens construction could look like? Which kind of lenses would I need?

Thank you so much :) 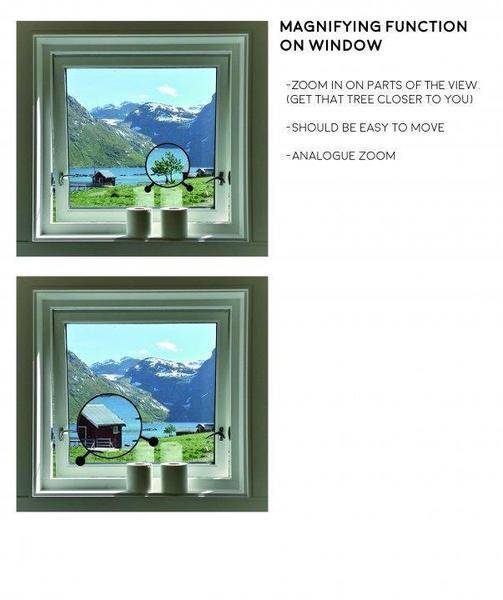 I'm not sure what specific lens, but here is a list of them (also check out some configurations of lens elements in normal DSLR camera lenses):

I'm no physicist however, but I do find this topic interesting. Have you seen this video of someone experimenting with liquid lenses?


Lastly, there are some interesting things out there like Light Field Cameras and new metamaterial "flat" lenses..

Thank you for your interesting input and thoughts.

I have seen this video about the electronic liquid lens, but unfortunately those kind of lenses work only on very small scales since with big lenses the force of gravitation is higher than the tension of the water droplet....

I thought to do a more simple system:

unfortunatley I can't achieve my desired result with only one biconvex lens. The image of far away objects appears upside down and also smaller instead of bigger....I think I need to work on some kind of lens system?!

How could I achieve this?- without making a very huge telescope....
The lens system should be as flat as possible so I can mount it on the window.

Does anyone have any experience with this?

I'm not an expert in optics, at least not yet, but I think what you're trying to do is exceedingly difficult if not impossible without using a large, telescope-like optical system. Unfortunately I don't really know how to explain why if you're not familiar with the basics of optics. Suffice it to say, a single lens will not magnify far-away objects. You're going to need a multi-lens system.
Kathrin

thank you for your reply.

I thought so already. I just thought I needed to try. I thought that there might be an option with fresnel lenses?!

the only option might be a digital solution.....
Drakkith
Staff Emeritus
Science Advisor

Kathrin said:
I thought so already. I just thought I needed to try. I thought that there might be an option with fresnel lenses?!

Fresnel lenses won't work any differently than regular lenses, other than be thinner but less clear. It's not the thickness of the lenses that matters here, it's the distance between them. To get magnification you're going to need to put some distance between the lenses, and I don't know if you can get around that somehow.
Kathrin

I guess the only solution is a digital solution- which is a pity.

Thank you for your help!
Nidum
Science Advisor
Gold Member

To take a guess, I'd say it would need to be on the order of at least a hundred millimeters or greater with a simple two-lens system. And even then the viewer would have to be within about 10-20 millimeters of the 2nd lens, aka the eyepiece.
CWatters
Science Advisor
Homework Helper
Gold Member

Perhaps you could do it with an LCD display and a camera?
mister mishka

Kathrin said:
I have seen this video about the electronic liquid lens, but unfortunately those kind of lenses work only on very small scales since with big lenses the force of gravitation is higher than the tension of the water droplet....

Yeah in the first video (at 4:30) he explains that both liquids have to have the same density to be in equilibrium with eachother, and that you would have to have a lot of voltage to drive the lens at that bigger size..

I've also heard a lot about flat / flexible photo sensors (some that could be eventually printed out), where you could cover a whole object (or room for that matter), but this is a lot of information to compute and I'm not sure if there are any of these devices out in the market yet.

The best option is probably to have a camera and a display as the window. Technically you could just use an LCD screen backlight from the actual environment outside, so it would be like a window overlayed with the display. The transparant display would loose half the light because of the polarization of LCD screens, but might be a cool concept since you could use the camera to aim and zoom into certain places, while the whole screen still being a normal window.
Kathrin

Thank you all for your help and advices. I think that the digital solutions are great suggestions, but part of my concept is to make it all analogue.

I'm actually thinking that the fact that far away things become smaller through the lens is not that bad- more important would be to take care of the inversion of the image. It would be great if I could find a way so you don't see far away objects upside down.

Maybe there is an option to work with the double glazing of the window-....or to place a lens on each side of the window- so they can work together. Would a biconcave and a biconvex lens system solve my problem? Or is there some solution with a Prism?

Thank you so much!

Kathrin said:
Would a biconcave and a biconvex lens system solve my problem?

It should. This type of lens setup is known as a galilean telescope: http://brunelleschi.imss.fi.it/esplora/cannocchiale/dswmedia/esplora/eesplora2.html
One of the advantages of this type of setup is that the image is erect and not reversed.
Kathrin

Great!!! Thank you so much. I will keep you updated about the results. :)
mister mishka

Another thought, you could just have 2 windows using the same liquid lens technique at a distance apart.. Then maybe you get around the issue with zooming / focusing into certain areas of the scene (as long as the liquid lenses can change shape / adjust separately). There might still be an issue with how far the observer has to be when actually looking through this window so it is in focus, but maybe if the liquid lens is flexible enough you can get around this?

Anyways keep us posted of your setup, I am interested to see if your analogue system can work (I would like to use a system similar to this for use in my visual films) ^^
Kathrin

Thank you very much for your ideas. I will try that and keep you posted how it worked out and what I came up with in the end (or didn't). :)
Would be interesting to see ur visual films.....
mister mishka

Yeah I am currently working on making a lot of content for weekly 1hr visual mixes (to go alongside my dj mixes), but I do upload some short films each week to my vimeo page, you can see them here:

mister mishka said:
Yeah I am currently working on making a lot of content for weekly 1hr visual mixes (to go alongside my dj mixes), but I do upload some short films each week to my vimeo page, you can see them here:

Your videos are really weird and interesting! (That’s supposed to be a compliment. Please don’t take it the wrong way.) It almost puts you in some kind of reverie
mister mishka

Thanks! No, I take weird and interesting as a compliment; they are meant to be something "different" ;)

I also really like that word reverie, I didn't know what it meant so I had to look it up, but it describes it quite well ^^
Share:
Share

Help with lenses for hand-made telescope

Question on Optical Systems and Lenses

R
Optics-Lenses - image outside the mirror?