Looking for a good metaphor

I'm looking for a good metaphor with which to embellish a story I have in the works.

Imagine the story is about finding a path that hopefully takes you home, but you can only see a few short yards before it bends out of sight. You round a corner and discover someone is just yards ahead you, desperately laying down this path, always just ahead of you. The path has no destination - it is not going anywhere other than 'in front of you' - ad libbing, as it were. (In fact, it could be said that you are directing the path, and the path-layer is only reactionary.)

The crux of the story - and thus the focus of the metaphor - is the guy desperately laying down a path just steps in front of you, and the violation of trust and betrayal you feel.

My first metaphor was a carrot on a stick, but that's not quite right. The mule is being led to a destination, chosen by the rider carrying the stick.

Another metaphor is obvious: Oz's "Pay no attention to that man behind the curtain!" Unfortunately, it's a little too obvious. It's so laden with history and interpretation it would overwhelm the story itself.

Another one was that cliched Sherlock Holmes with magnifying glass, hunched over, following footprints through the forest, only to round a corner and find just a pair of shoes with sticks in them, obviously faking footprints.


If you think of a metaphor, it might help to test it by seeing how well it might be encapsulated in a hypothetical title for the story. Spurious examples:
"Carrot on a Stick", or
"The Man Behind the Curtain", or
"The Case of the Wandering Footsteps".

He is intelligent, but not experienced. His pattern indicates two dimensional thinking.

Take off and start flying over it all. Just like in your dreams...
DaveC426913
Gold Member

??
Have I communicated my problem poorly?
berkeman
Mentor

DaveC426913 said:
The crux of the story - and thus the focus of the metaphor - is the guy desperately laying down a path just steps in front of you, and the violation of trust and betrayal you feel.

No, probably my fault. My philosophy is "If you have a problem, fix it." So given your premise, I went straight to a solution, rather than trying to figure out a metaphor. I'll eject myself from the thread, and your next reply will be MUCH better.
DaveC426913
Gold Member

berkeman said:
No, probably my fault. My philosophy is "If you have a problem, fix it." So given your premise, I went straight to a solution, rather than trying to figure out a metaphor.

Well, if my story skipped the journey and started with the destination, it wouldn't be much of a story, would it?


I want to use the metaphor as a scaffold - something to ground the story - as the characters navigate the events.

If I were to go with the Oz metaphor, my story would be peppered with snippets like "when they pulled back the curtain" and "he gave us nothing that we didn't already have inside us", etc.

If I were to go with the carrot metaphor, it might be peppered with things like "too far ahead and the mule loses interest; too close and the mule eats the carrot in one gulp".


I expect the metaphor will also provide fodder for another layer of story. Currently, the story really only has one layer. It's not really a story yet, it's the kernel of a story.
Klystron
Gold Member

Not precisely a metaphor; your story outline reminds me of Robert Frost's poem "The Road Not Taken". This popular poem inspired many other artists in different media including other poems, short stories, songs, pictures and paintings.


The Road Not Taken

Two roads diverged in a yellow wood,
And sorry I could not travel both
And be one traveler, long I stood
And looked down one as far as I could
To where it bent in the undergrowth;

Then took the other, just as fair,
And having perhaps the better claim,
Because it was grassy and wanted wear;
Though as for that the passing there
Had worn them really about the same,

And both that morning equally lay
In leaves, no step had trodden black.
Oh, I kept the first for another day!
Yet knowing how way leads on to way,
I doubted if I should ever come back.

I shall be telling this with a sigh
Somewhere ages and ages hence:
Two roads diverged in a wood, and I—
I took the one less traveled by,
And that has made all the difference.

A metaphor from Tom Wolfe: "All at once he was alone in this noisy hive with no place to roost."
BillTre
Science Advisor
Gold Member
2020 Award

I don't know about a metaphor, but it sounds like a story about mis-direction, or mal-direction (depending upon intent).
It also reminds me of the story about looking for the lost item under the street lamp, since that's where the light is (thus simplifying the mal-direction).
Better long range sensory systems will set you free.
sysprog

A regent in his chariot,
from days more ancient than the wheel,
rough-borne on rolling cylinders,
of balsam hewn and sanded smooth,
hand-carried by his retinue,
around afore when oustripped aft,
to move him over untouched earth.
until his unknown goal is reached.
Last edited: Nov 1, 2020
mjc123
Science Advisor
Homework Helper

Reminds me of the scene in the Wallace and Gromit animation "The Wrong Trousers" where Gromit is desperately laying down track in front of the train he is riding in...
jack action
Science Advisor
Insights Author
Gold Member 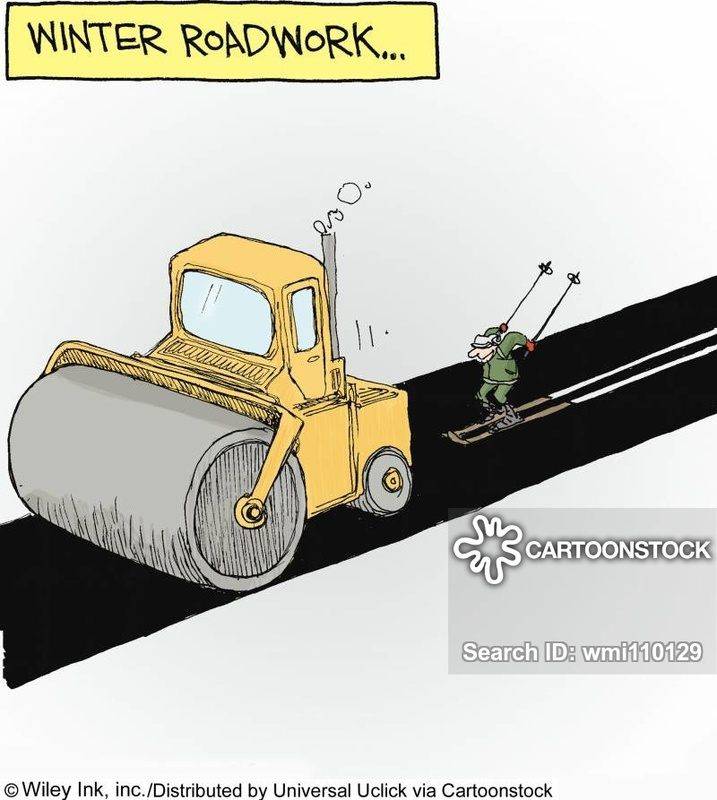 mjc123 said:
...Gromit is desperately laying down track in front of the train he is riding in...

Yes. Yes. That is one of the other ones I thought of. Should have mentioned it in my list.
chemisttree
Science Advisor
Homework Helper
Gold Member

mjc123 said:
laying down track in front of the train

DaveC426913 said:
You round a corner and discover someone is just yards ahead you, desperately laying down this path, always just ahead of you. The path has no destination - it is not going anywhere other than 'in front of you' - ad libbing, as it were

What came to mind is that the path layer guy is just slowing you down on your trek as you wait in frustration for him to lay the cobblestone, all the while not knowing if the trail will lead to you destination.
Lead, Follow, or Get out of the Way

Patton is attributed to saying ”Lead me, follow me, or get out of my way.”
Rive

Maybe you can cook up something of your own. There is a phrase like 'blind leads the sightless', composed of synonyms - maybe something like 'the trusting led by the lost' or so...
My English is not really up to this, I'm afraid

If there was also someone behind you eradicating the path, it might inspire metaphors.
hutchphd
Science Advisor
Homework Helper

I am reminded of a call-in to a radio show in Atlanta when they were in the midst of a once- in-a-decade blizzard. The caller said in an exasperated tone " I called you because no one at city hall answered. Someone needs to tell the city drivers that the snow plow should be in front of the salt truck!!
There was a wonderful science fiction story from my youth that involved the fishing metaphor. People were disappearing randomly and the protagonist slowly connected it to the slightly misprinted and odd tasting food that appeared in the refrigerator. (Lures) I do not remember the author or title (anyone?)
Of course there is the pilot fish
Hansel and Gretel?
mjc123
Science Advisor
Homework Helper

Your road-under-construction sounds as if it is itself a metaphor for some aspect of life. Do you need another metaphor to describe it?
Fervent Freyja
Gold Member

Isn't that rather the opposite of the scenario?
Tom.G
Science Advisor

Following my own shadow.

phrases in parens are optional
My doppelganger is (always) one step ahead (of me).
Da*n I'm getting ahead of myself again!
Hmm, I see I've beat myself to it again.
Last edited: Nov 9, 2020
256bits
Gold Member

those are good ones
jbriggs444
Science Advisor
Homework Helper

Lost: You get to the end of the road and realize it was just fiction.
Turtles: You finally realize that it's turtles, all the way down.
War Games: The only way to win is not to play. [puts down the story].
Keith_McClary
Gold Member

Being led down the garden path

“If you can see your path laid out in front of you step by step, you know it's not your path. Your own path you make with every step you take. That's why it's your path.”

Related Threads on Looking for a good metaphor

Looking for a book about music

The word "won't" does not look logically formed
2

Looking for history of candlelight vigils