Strong earthquake his the Pacific coastline in Michoacan State in Mexico.
https://earthquake.usgs.gov/earthquakes/eventpage/us7000i9bw/executive
15.1 km is relatively shallow as earthquakes go. Should be a lot of structure damage.

Wow that's strong, and shallow. Thankfully not in the middle of a metropolitan area. Still some injuries and at least one death, which are not good...

A 7.7-magnitude earthquake off the southwestern coast of Mexico in Michoacan state on Monday has prompted tsunami warnings and caused at least one death, according to Mexican President Andrés Manuel López Obrador.

The powerful earthquake's epicenter occurred in a sparsely populated region of Michoacan state, very near the coastline. In nearby Colima, around 100km from epicenter, very strong shaking capable of "moderate" damage was reported, per USGS data.

In Mexico City, roughly 500 km away, "light to moderate" shaking was reported, which is capable of "very light" damage, especially to vulnerable structures. There are no known casualties or damage yet recorded in Mexico City, according to the city's mayor, Claudia Sheinbaum.

Local news channels reported that firefighters closed some buildings in Mexico City to the public due to concerns of collapse.

Astronuc said:
Strong earthquake his the Pacific coastline in Michoacan State in Mexico.

and a 6.8 aftershock a couple of hours ago of me writing this

it has the same focal mechanism as the 7.6 mainshock ... thrust faulting 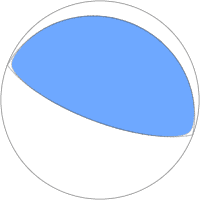 Formation and evolution of the Great Lakes in US/Canada border

A new volcano in Mexico?