Alex is asked to move two boxes of books in contact with each other and resting on a rough floor. He decides to move them at the same time by pushing on box A with a horizontal pushing force FP = 9.3 N. Here A has a mass mA = 10.6 kg and B has a mass mB = 7.0 kg. The contact force between the two boxes is Fc
The coefficient of kinetic friction between the boxes and the floor is 0.04. (Assume fp acts in the +x direction)
a) What is the force exerted on mB by mA? In other words what is the magnitude of the contact force
F[PLAIN]https://www.webassign.net/wastatic/wacache8d5e957f297893487bd98fa830fa6413/watex/img//rightharpoonhead.gifC? [Broken]
(c) If Alex were to push from the other side on the 7.0-kg box, what would the new magnitude of
F[PLAIN]https://www.webassign.net/wastatic/wacache8d5e957f297893487bd98fa830fa6413/watex/img//rightharpoonhead.gifC [Broken] be?

That is the friction force. When determining the contact force, I think a free body diagram is essential. Your equation looks promising.
Last edited by a moderator: May 7, 2017
CristinaCotto

Thank you, and i haven't grasped the concept of free body diagrams yet.
I tried the equation on a problem my tutor helped me with but i didn't get the same answer, What could be my fault?
if i get 9.3-6.9(7.0 * .136)= 1.448N
is this correct?
NascentOxygen
Staff Emeritus
Science Advisor

You need to explain where these numbers appeared from and what equation you are using.
CristinaCotto

I think you probably have the right idea, but this post is badly in need of proof-reading! I can see a wrong value, missing brackets, and a missing sign. These need fixing.

He is pushing on the 10.6 kg box, right?
CristinaCotto

I am so sorry, I did it how I saw it on a question on a different website.
Yes the pushing force is on the 10.6
NascentOxygen
Staff Emeritus
Science Advisor

I see in another post that you are attempting physics without having the prerequisites, so let's see if we can sort out some of your mistakes here. You can't afford to let misunderstandings slip by at this early stage.

A diagram is essential. I have marked in only the horizontal forces to avoid clutter. 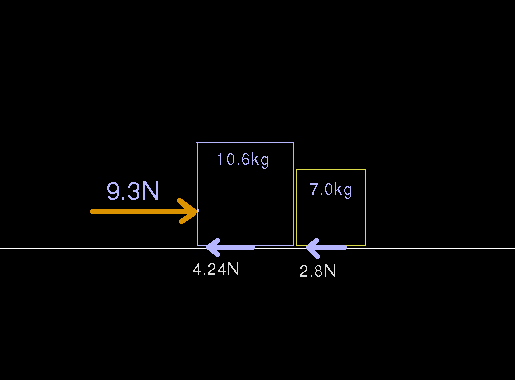 The applied force must overcome friction, and any remaining force will accelerate the combined blocks according to the equation F = m.a

▶ Part (c) of the problem asks what would the force of one block on the other be if he were to push on the 7kg block instead. Can you answer that?
Last edited: Feb 6, 2015
NascentOxygen
Staff Emeritus
Science Advisor

It is essential that you take greater care with mathematical expressions. Here is a case in point:

The figure of 0.136 is correct for acceleration, but it's not the result of that line of arithmetic! You must have calculated it in another part.
CristinaCotto

yes, I'm sorry but I'm basically trying to self teach myself since my teacher doesn't want to give examples.
Thank you so much for your help! I will attempt to write out my equations and formulas correct.
Share:
Share