In this thread I am basically going to copy over what I posted in a previous thread which describes what I consider to be the four most elementary molecules in life. Lipids, DNA, RNA and Proteins. It is on these four types of molecules that Life is based, and so are the basis for Molecular Biology.

Your task in this thread, if you choose to accept it, is to correct me where I am wrong, offer interesting facts that are connected to what I have said, or ask for clarifications on any points that I have raised. Since this is the basics, I expect there should be a lot of questions. If there is ANYTHING you don't understand, or you think I have explained poorly, just say so, and some one will help out.

Molecular Biology is really really interesting when u start to understand stuff, so let's get going!

(This is a brief intro into each of the major molecules. If anyone REALLY wants to know more about one of them, then say so, and some time in the future, i, or maybe Monique of she wants to, will have a thread based entirely on the intricacies of that particular type of molecule.)
Last edited: Oct 11, 2003

Lipids are amphipathic molecules (that is, they have one end Hydrophobic (water hating), and one end Hydrophilic(water loving) (For a demonstration of a Hydrophobic molecule, pour oil into a glass of water.) This property of lipids causes them to naturally form themselves into a membrane layer. The water hating half do whatever they can to get away from the water, so they all stick together, while the water loving half stick out into the watery suroundings. Because of the shape of Phospholipids and Glycolipids, this results in a lipid Bilayer. That is two lipid molecules, tail to tail, all lined up next to each other.
http://helix.nih.gov/images/dppcx3.jpg[/URL] [Broken] [/PLAIN] [Broken] and
http://www.thomsonlearning.com.au/biology/guide/unit_3/images3/fig_2.4.gif [Broken] show you what i mean.

In the case of some other types of lipids, Miceles are formed, which are basically just a ball of lipids, rather than a bilayer...

I think this is how cells store fat in our body...Otherwise they are not really vitally important to a functional cell. The Lipid Bilayer is though, it is the skin of the cell, the thing which keeps the cell together and interfaces with the horrible outside world.

Of course though, it does not work alone, about 50% of the cell membrane (by mass) is made up of membrane associated proteins. (You can see some examples of these in the image above.) These proteins 'float' in, on, or whatever through the Lipid Bilayer. As well as the proteins, membranes are made up from about 5 or 6 common types of lipids, and cholesterol molecules.

Membranes can be very complex, and so if anyone wants to learn more about Membranes in particular, there is heaps more to be said.
Last edited by a moderator: May 1, 2017
Another God
Staff Emeritus
Gold Member

DNA
Unlike Lipids, which self assemble themselves into Membranes as a matter of course, DNA, RNA and proteins do not do so quite so readily. It is these molecules which really make up everything which is interesting about functional cells. Lipids are just a good place to start because they don't need anything to do what they do.

One of the important features of a functional cell, is that it is able to copy itself. To do this it has to be able to make all of its components (proteins and RNA molecules), and copy its DNA. DNA encodes all of the RNA and protein molecules, while the base pairing nature of the double Helix allows DNA to be duplicated. See in the image above how the C binds to the G and the T binds to the A? Well in replication of DNA, all that happens is that these two strands are pulled apart and a protein/RNA complex reads one DNA strand and grabs loose Nucleotides (Base + Sugar + Triphosphate molecules) which match up to the strand which is being read and adds them to the new strand being created. Eventually both of the strands are copied and you end up with two DNA molecules. Look at these images to see DNA replication images: 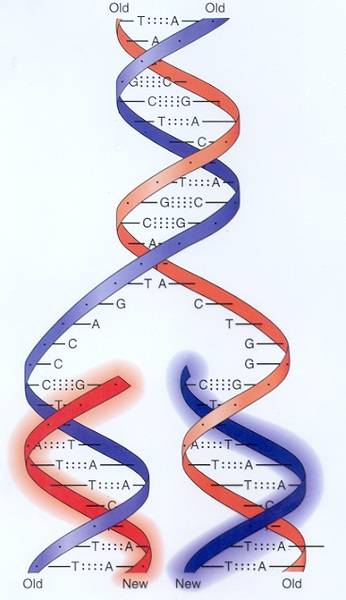 This is how DNA is copied, and this is possible the most important part of a functional cell.

This is all complicated when u find out that it is catalysed by a huge list of protein/RNA complexes, and that Replication only ever proceeds in a 5' to 3' direction (5' = the end of DNA that has the 5' Carbon of the Sugar backbone free, while the 3' end = the end which has the 3' carbon of the sugar back bone free). Once again, there is heaps more that can be said on DNA, DNA replication, and linking this and the next topic together, DNA transcription into RNA.

Summary so far...
Membranes act as the skin, differentiating inside from outside, and they self assemble. DNA replicates itself by its chemical propensity to base pair with only one other base (this catalysed by protein and RNA molecules, but it is based on the natural chemical nature of DNA molecules (which RNA mirrors in the catalysis).

RNA
RNA is very similar to DNA, the only difference really being that RNA has an extra oxygen, and one of its bases is Uracil instad of Thymine.

It's role in the molecular picture of life is that DNA is transcribed into RNA. DNA does two things: Gets replicated, and gets copied into RNA molecules. Thats all. RNA bases match up to the DNA bases much like DNA replication, and a long RNA chain is made (no where near as long as the whole DNA chain though) before being released when it reaches a particular sequence which causes the molecule to let go. (based on the fact that the hydrogen bonding between the two molecules is particularly weak at this point)

These RNA chains can then either fold up into their own functional structures and do stuff (such as the molecules which help replicate DNA, transcribe DNA, Translate RNA and other functions), or then can remain as linear molecules and be translated into proteins. (these are called Messenger RNA molecules)

For example: tRNA's (Transfer RNA) bind to the mRNA molecule based on recognition of three bases (called a Codon) and attaches an Amino Acid (the molecules which make up proteins) which is associated with those three bases. This process proceeds until it reaches a stop codon, and the protein is made (almost).

The Genetic Code (which dictates which Amino Acid each Codon represents) can be seen here: [PLAIN]http://www.cimr.cam.ac.uk/images/genetic.gif [Broken] [/PLAIN]

RNA is very similar to DNA, but the roles they play is quite distinct. DNA for instance, in higher organisms is pretty much always Double stranded. RNA is pretty much always single stranded. This allows RNA to fold up on itself and form structures. It also makes RNA a much more transient molecule, coming and going rapidly, while DNA sticks around. (as long as the ends of the DNA molecule are protected by Telomeres or the DNA is circular). Once again: Much more can be said.

The mRNA is translated by tRNA base pair matches to the Codons, and the Amino Acids that attach to each tRNA molecule are added to the growing chain of Amino Acids that make the Protein (See here: http://www.engineering.ucsb.edu/~trevorc/images/tech/translation.jpg [Broken]).[/URL] I perhaps should have also pointed out in the RNA post, that there a many tRNA's (64 is it? One for each codon? Or its at least something near that) and each tRNA binds to its own specific Amino Acid, and has its own specific Codon recognition sequence (Anticodon).

Anyway, point being, that through the base pair recognition system, RNA is made, and RNA uses this to create proteins. Proteins are then quite unlike anything else. Made up from 20 different Amino Acids stuck together according to the sequence encoded in the DNA, each amino acid has its own distinct properties. (See the Amino Acids in all their variety here: http://www.cm.utexas.edu/academic/courses/Spring2002/CH339K/Robertus/overheads-1/ch5-amino-acids.jpg [Broken])[/URL] In general though, they are each classified according to their side chain charge and polarity.

Proteins are described in terms of 4 structures. Primary structure is the easiest, the Primary structure is the order of the Amino Acids. This is easily figured out from the DNA sequence that encodes the protein. But this is only the first step. The side chains of the Amino Acids, all with their own particular properties, Hydrophobicity, positive charge, negative charge, polar, non-polar etc, interact to start forming secondary and tertiary structures. Secondary Structure is how the protein folds up into 'Beta Sheets' and 'Alpha Helices' (http://bioweb.wku.edu/courses/biol22000/3AAprotein/images/F03-08C.GIF Where the Green arrows depict Beta sheets, and the blue coils depict Alpha helices. See a description of the all of this Here.) The tertiary structure just builds on top of the Secondary structure, being the description of how everything folds up. This folding process is guided by all of the electrostatic interactions etc. Eventually, a fully folded globular protein results: http://www.the-scientist.com/images/yr2002/apr29/protein.jpg [Broken] and http://student.biology.arizona.edu/honors98/group2/protein.gif [Broken])These[/URL] globular proteins may then interact with each other, binding into larger molecules creating the quaternary structure.

And that is what a protein is.
What proteins do though...wow...what don't they do? catalyse reactions, forming structures (wood for instance), making elastic substances (the stretchyness of our skin), making spider webs, silk, hair, nails, etc. They are the motors inside cells which turn energy poor molecules into energy rich molecules. They then use those energy rich molecules to do energy requiring tasks. They are pumps, they are plugs, they are wedges.

So to sum up: Membranes self assemble. DNA has chemical properties which dictate how it should be replicated and transcribed. RNA has chemical properties which dictate how it is transcribed from DNA, and how it then folds up, which has practical applications in then translating mRNA molecules into Proteins. Proteins are therefore coded from the mRNA molecule into particular primary sequences, which, because of particular chemical reactions, consequentially fold in secondary, tertiary and quaternary structures. Based on these 4 structural elements, proteins have a range of functions which create the amazing functionality of the cell.

There is no single 'Element' which separates a 'living cell' from molecules. A living cell, is just a complex collection of molecules doing the stuff they would be doing outside of a cell given the right components/environment. The cell just happens to provide all of those elements
Last edited by a moderator: May 1, 2017
Share:
Share

Suggested for: MBTS: The Basics

Powassan virus on the rise in the US?

How do the Setter dog breeds relate to the Predatory Sequence?

Theoretical substantiation of the handicap principle

Medical The impact of the sympathetic nervous system on blood vessels

Is there a way to use the hydrogen in the human body?

What are the basic necessities of life (methyl isocyanate)

In Vibroacoustic Therapy does the transducers have to be on the skin ?

Are all 3 shots of the Pfizer Covid vaccine the same?

COVID publications from the PHE are now issued by the UKHSA