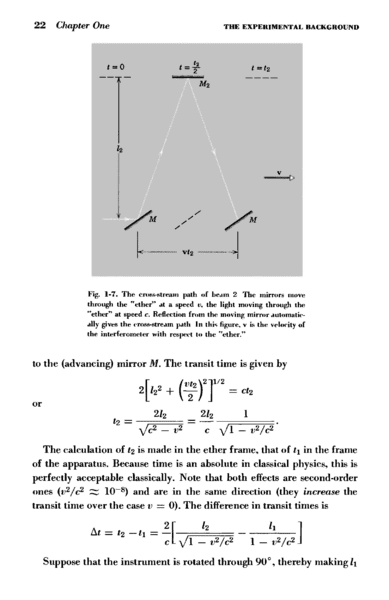 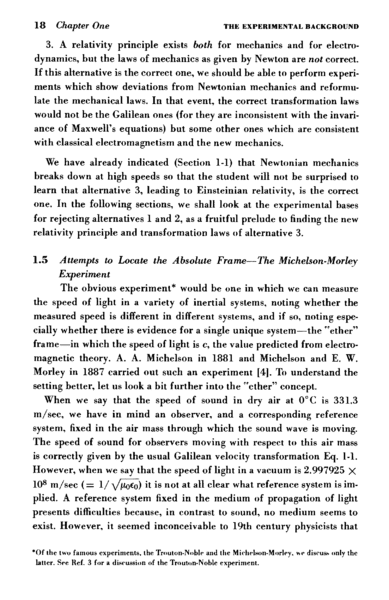 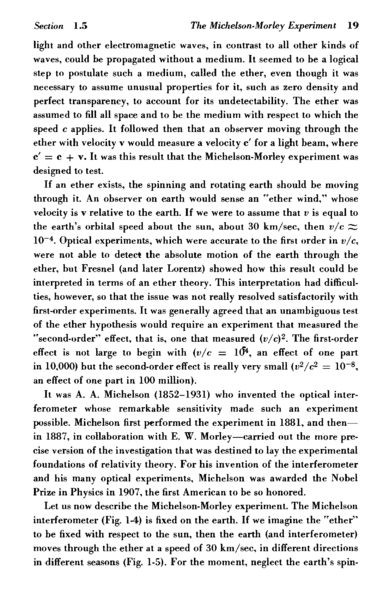 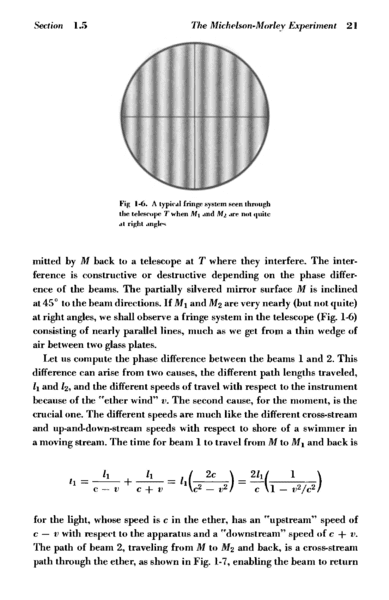 Here, for calculating t2 , w.r.t. ether frame, light is moving along the triangular path as shown in Fig. 1.7 with speed c.

Pushoam said:
In page no.21, it's written If M1 and M2 are nearly(but not quite) at right angles.
Why can't we take "quite right angles"?

It's much easier for humans to keep track of moving lines than it is to precisely measure brightness or darkness, so the "slightly tilted mirror" is a better experimental setup. This is just practicalities of using an interferometer. It's useful to know, but it's not really anything to do with relativity.
jtbell
Mentor

Pushoam said:
In page no.21, it's written If M1 and M2 are nearly(but not quite) at right angles.
Why can't we take "quite right angles"?

Ibix said:
You can do. But then you get constructive or destructive interference across the whole screen and see the whole thing either light or dark.

Actually, you see this only if the screen is "too small." If M1 and M2 are perfectly aligned at right angles, the interference pattern looks like a bullseye target with a central maximum or minimum. As you move one mirror, the rings either contract towards the center or expand outwards, and the central region alternates between maximum and minimum intensity. Do a Google search for "michelson interferometer bullseye" and you'll find some pictures. I bet there are YouTube videos, too.

When you "tilt" one of the mirrors enough, the center of the bullseye moves far enough off screen that you see only small sections of large-radii circular fringes. They look like nearly-straight lines that move transversely across the screen as you move one mirror.
Last edited: Jun 1, 2017
Ibix
Science Advisor
Insights Author

True - I oversimplified. The bullseye pattern is a consequence of the beams not being perfectly collimated, so if there's a non-zero path difference between the arms you get spherical wavefronts with different radii of curvature interfering. But if you have perfectly aligned mirrors then the closer you come to zero path difference the larger that central spot gets until it fills your view whatever you do. Which is annoying since, particularly with short coherence time sources in pre-laser days, the contrast between light and dark fringes falls off as you move away from zero path difference.

Tilting one of the mirrors ensures that the spherical wavefronts are not concentric even if they have the same radius of curvature. That means you get stripy fringes even at zero path difference, which lets you easily operate the instrument in the regime where the fringes are high contrast.
Log in or register to reply now!

B Revisiting the Michelson-Morley experiment