A 1222 kg weather rocket accelerates upward at 8.7 m/s2. It explodes 2.16 s after liftoff and breaks into two fragments, one twice as massive as the other. Photos reveal that the lighter fragment traveled straight up and reached a maximum height of 612 m. What was the speed of the heavier fragment just after the explosion 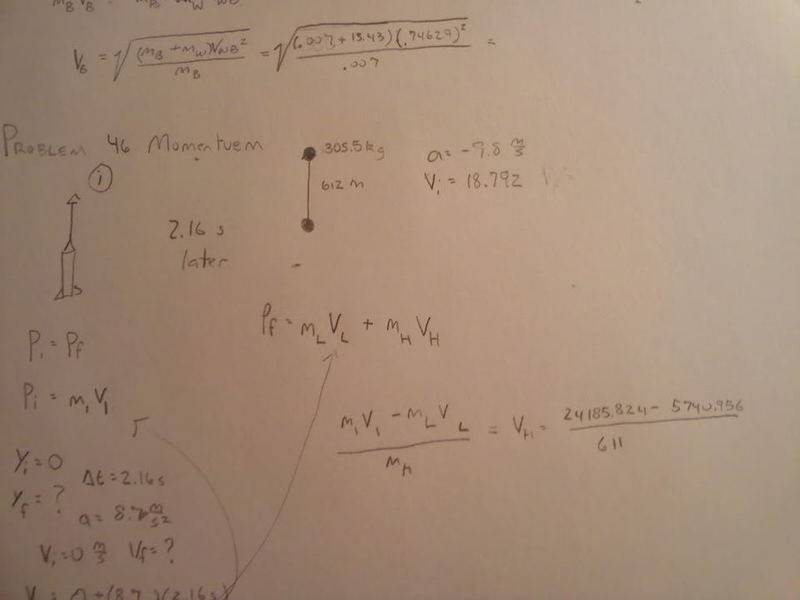 You can calculate the initial speed of the lighter fragment after the explosion from the fact that it travels a distance of (612 m - whatever height the rocket exploded at). After that I'm not sure whether they just want you to get an answer in terms of the mass ratio of the fragments, or whether it is possible to get a numerical answer with the information given.
talaroue

You started out ok by solving for the initial velocity of the rocket. You are correct in setting up a momentum equation for just before/after the explosion. I would suggest next calculating the mass of the two pieces. You know two things.

The mass of both pieces = total mass of rocket. (equation 1)
You also know that one piece is twice as large as the other. (equation 2)

Now you need to solve for the velocities. You can figure the height of the explosion and are given the maximum height the lighter piece travels. From that you can find what it's speed was right aftr the explosion. All that's left to use momentum to solve for the speed of the bigger piece.
talaroue

No. Think about it. If it did, would momentum be conserved?
cepheid
Staff Emeritus
Science Advisor
Gold Member

Chrisas said:
You also know that one piece is twice as large as the other. (equation 2)

Yeah, I missed this piece of information the first time I responded. Sorry for any confusion. So in that case it is definitely possible to get a numerical answer.
talaroue 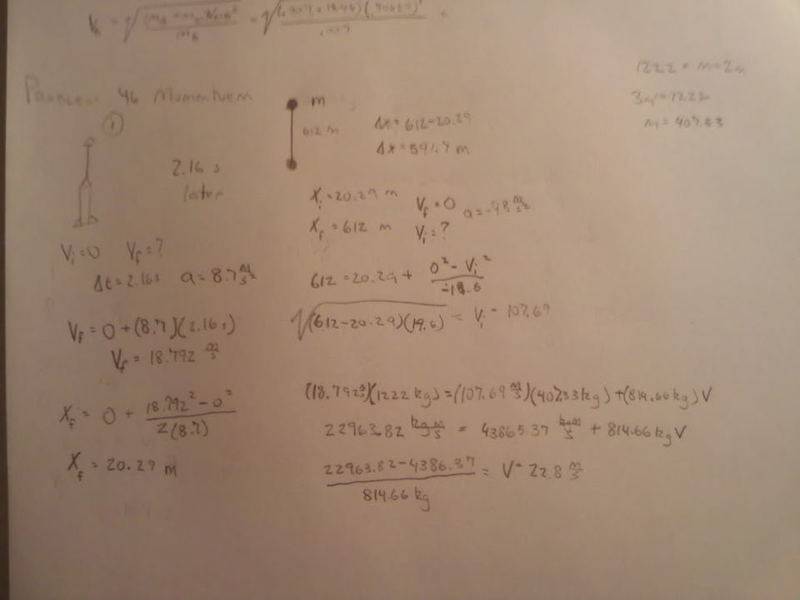 this is my work the second time around but it is wrong again....what did i do wrong?.......
Chrisas

so the way i found the Vf is wrong?

EDIT: It comes up the same either way.

so where did i go wrong
Chrisas

You should get that the heavier piece has negative velocity, or that it is traveling downward.
talaroue

I don't see how though. all my work seems to be right and how do you know that it is traveling down?
Chrisas

talaroue said:
I don't see how though. all my work seems to be right and how do you know that it is traveling down?

Your work does seem to be right, but you have made a math mistake in your last line. You have the number 4386.37 in the numerator. But look at your previous line, it should be 43865.37. You have left out the 5 digit.

Put the 5 digit back in and you get a negative number meaning down.
talaroue

What answer did you get and what do you think the answer should be?
talaroue

I got -25.66 m/s.....I think that it should be around -50 m/s be right considering the smaller one took off at an extremely fast speed, so the second one with a heavier mass would take off significantly slower.
Chrisas

Your answer seems correct to me, but you logic is a bit faulty. If two masses were sitting still when it exploded then yes the velocities would in the same ratio as the masses, i.e. the bigger one half the speed of the smaller one. However they weren't standing still when it exploded that were both traveling upward. The initial upward speed changes things so that the velocities are not a simple ratio. Some of the initial upward speed will add to the speed of the lighter one and some of the initial speed will subtract from the heavier one that is falling.

However, it's not good to think of this problem as adding/subtraction speeds, it is momentum that is being added/subtracted.
talaroue

i get it, do you think that since I found the speed of the rocket going up, i should incorporate that into the heavier one going down?
Chrisas

o ok, I am just trying to figure out why it isn't coming out correct.
Share:
Share

Principle of linear momentum for a rocket