I was wondering if someone could help me see where I am messing this up:

Lets say we have our train with a relative velocity of .5c, Also suppose it is .816ls tall, and that there is a mirror mounted on the floor, another mirror directly above it, and a third mirror about .577m to the rear and attached to the ceiling.

To the observer on the train:
Two photons are sent out, Photon A hits the mirror directly above the bottom mirror in .816 seconds, Photon B hits the .577m behind mirror in 1 second.

To the observer on the platform:
Two photons are sent out, Photon B hits the mirror .5(the distances measured on the train should be contracted yes?) behind in .816seconds, and then Photon A hits the mirror that was directly above in .958s, The normal explanation for photon A is timedilation occured and time went slower to make up for the difference, Photon B however, indicated time must have sped up.

There are a number of good intros to SR that need only algebra (e.g. one by Mermin). From a series of questions you've been asking, it appears you are quite interested in these issues. Asking questions without doing any related reading is going to be a very inefficient way to make progress.
Zula110100100 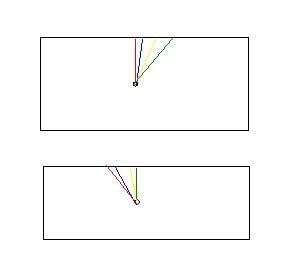 The green line does indeed get shorter, but the red line get longer, also due to the angle
Zula110100100

Instead of saying my math is wrong, or that I have the ideas backward, please actually go through the math, and show where the idea is wrong.
Doc Al
Mentor

You failed to take account of the relativity of simultaneity. The measurement of photon B's time of travel on the train requires two synchronized clocks separated along the line of travel; These clocks are not synchronized in the platform frame.
PAllen
Science Advisor

Zula110100100 said:
I am not sure if I am not accouting for all that is going on but here is a picture of what I mean 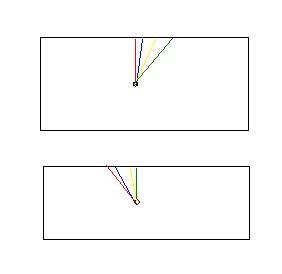 The green line does indeed get shorter, but the red line get longer, also due to the angle

I don't need to compute anything if the overall description and expectation is wrong - there is nothing worth computing until that is resolved.

Your picture doesn't match my understanding of your original post. It seemed to me you were saying the mirrors were attached to the floor and ceiling of the train. If so, your picture is simply wrong, and there is nothing to compute.

To the platform observer, all the mirrors would move in the same pattern, and all light paths would be longer. This is obvious without computation.

If you meant something different, you have failed to convey what you mean, either with your description or your picture.
Zula110100100

Lets start from a different angle then, back to the picture which is indeed different that what I described. So if I had an object in the center of the train, and it flashed a different colored light in each direction, lets say the observer on the train sees a green light go straight up and hit the area above the device, to an observer on the platform he must also see the green light hit above the device after the train as moved an amount, so to his point of view the green light must have been shined at an angle in the first place, and another color, say red, was the one pointing straight up. 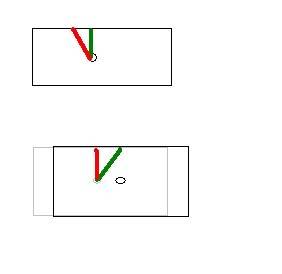 So if we disregarded green, and only measure the time for the red photon to travel, it seems the person who is on the platform would say it took LESS time than the person on the train, who saw it travel further,

The relativity of simultaneity only corresponds to the timing of two seperate events right, like, if two cars crash, the two cars do crash, from every point of view, it is just a matter of if they crashed before or after I had breakfast?

if that is the case, forget about the two photons and just what happens if the light clock is tipped backwards?
PAllen
Science Advisor

Much more clear now. There are two related questions here:

2) Ok, forget bouncing, and ask only about the up trip. Now, as Doc Al noted, you have to worry about simultaneity. If the clocks at the two ends of the red path are synchronized for the train, they are not synchronized for the platform observer. This is in addition to running slower.

You want me to calculate this? I won't because my recommendation to you is to read about this topic. Then do the calculation your self (this would involve the Lorentz transform). Then I would be happy to respond to your computation. The point is that is clear to me you are at a point you need to read something systematic to make progress (and you don't need any advanced math for SR).
Doc Al
Mentor

Zula110100100 said:
if that is the case, forget about the two photons and just what happens if the light clock is tipped backwards?

Light clocks work just fine regardless of orientation. The analysis is more complicated for a tilted light clock, but the result is the same. (Be sure to consider round trips for the light pulse, so it ends up back where it started in the rest frame of the clock.)
Zula110100100

I wasn't considering round-trip originally because I was imagining a line of mirrors spaced top to bottom to allow for a steady up and down path to the platform observer, I guess I need to learn more about simultaneity as it seems that the answer is in the clock synchronization.
Zula110100100

Hmm, so without worrying about simultaneity I pictured a 1m sphere centered around the light source, if you compare the paths each photon would make reaching the edge of this sphere, it seems the average distance would be equal to the accepted time dilation amount, is this true?
Share:
Share

More on the sliding block

P
An atomic clock and a normal clock

The light clock and the simple clock