Otherwise, you can cascade any allowable configurations, and calculate an overall gain. I can't say whether your results are correct because your images are mostly unreadable. You would need to do over your schematics, using a black ink and printing legibly.
skeptic2

Drao92 said:
When we connect the 2 amplifiers, each amplifier acts like an impedance for the other amplifier???

Not always. Designers of multistage amplifiers make an effort to match the input impedance of the second stage to the output impedance of the first stage because this maximizes power gain. This can be done with resistor pads or transformers and at RF frequencies by capacitors and inductors.
Drao92

Thanks very much for the informations. I think they are correct because i solved many problems using this and i got only correct answers.
Drao92

I come back with another question for this amplifier.
Can you tell me if i did the circuit in AC correct??? That wire from diode acts like a ground and the impedance from the drain of the transistor to the ground is in parallel with R5.

The impedance from drain to ground is infinite.
https://www.physicsforums.com/attachment.php?attachmentid=58848&stc=1&d=1368961495

Offhand it seems that the value of Vcc is very critical. What voltage are you planning to use for Vcc?
Drao92

What are trying to do with this amplifier?
Drao92

Drao92 said:
I have another problem in which im not sure what im doing.

I'm having trouble following what is going on. You have intentionally omitted all biasing arrangements, have you?

PNP T2 has its base grounded, so its emitter is +0.6V or so. This seems barely sufficient for T1 to operate. It also gives PNP T3 a collector voltage that is not only too small, but is also the wrong polarity (unless you are deliberately using it in the inverted mode?).

I am not au fait with a Y-A transform, but it seems that, for typical circuit values, your expression evaluates to basically R3.

I evaluated the 'active load' arrangement from basics, and (assuming no errors) find the impedance presented is of the order of R3/β when operating.

Any idea what the answer should be, so we can check who is closest to being right?
Drao92

No sorry, i dont have answers.
Now i think its R3/β when im looking at the second circuit from photo.
I dont know how to calculate the impedance in that circuit. Let I3=current in R3 resistor, then V=I3*R3+Ib*rbe+(β+1)*Ib*R5
The current in V source is I=β*ib+I3.
And to find the impedance i do V/I but here i have I3 which makes me troubles.
ALso, i realised its not correct as i did because if we calculate the equivalent impedance of common base from emmiter to ground the impedance is rbe/(β+1) but if we do as i did above it would be infinite impedance||rbe=rbe so i omitted 1/β

About the problem above, i dont think the circuit does anything, its just practice problem from homework so i dont know if it works in reality yet :D. The course is more about circuit analysis. Next semester we will do serious stuff.
Last edited: May 27, 2013
NascentOxygen
Staff Emeritus
Science Advisor

I dont know how to calculate the impedance in that circuit. Let I3=current in R3 resistor, then V=I3*R3+Ib*rbe+(β+1)*Ib*R5
The current in V source is I=β*ib+I3.
And to find the impedance i do V/I but here i have I3 which makes me troubles.

Where have these values sprung from? On the face of it, those seem absurdly low values for R2 and R3.
Drao92

They are from exercise :), not random.
VCC was 20v, low signal analysis.
THis is the circuit.
I made aproximations when i said its 5k,2.5k etc.
Vin is on R1 and Vout on RL

You just guessed rbe did you??

The subcircuit has a resemblance to a conventional single transistor constant current source. The base bias of T2 sets the voltage across the current source so we can see it will be something like 10V.
Drao92

Ic2 is about 2ma or 1ma, i dont remeber exactly.
And if the subcircuit is a constant current source its impedance is always infinite???
NascentOxygen
Staff Emeritus
Science Advisor

Drao92 said:
Ic2 is about 2ma or 1ma, i dont remeber exactly.
And if the subcircuit is a constant current source its impedance is always infinite???

If it is a constant current source, yes. But there is one crucial difference here, and that is that the bias resistors (as well as the collector) connect to the load. This changes things, as I think we are finding. (For your figures, I make Z roughly 2.R5 but as I said, I may have made a mistake.)

It would be good if you could run this in PSPICE, to compare with your analysis.
The Electrician
Gold Member

The impedance at the collector of T3 can be found in the usual way by writing the node equations for the circuit, with a test current applied to the collector node. It's convenient to arrange them in matrix form, Y*V=I, where Y is an admittance matrix, V is a vector of the unknown voltages and I is the stimulus vector of currents. For this problem it's possible to use only the admittance matrix. Taking its inverse is equivalent to applying a test current of 1 amp to the 3 nodes, one at a time. 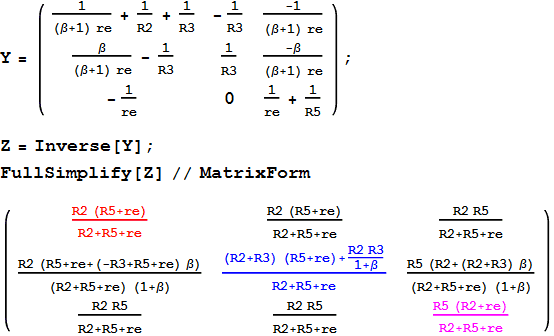 The numerical value of the impedance at the collector is 3127.57 ohms.

Since rbe/β = re, if you divide your numerator and denominator by β, you will get what I got except you are missing the term +(R2 R3)/(1+β) in your numerator.
NascentOxygen
Staff Emeritus
Science Advisor

Checking back, I found my blunder (I was determining Vin/Ib). With that fixed, I now find Zin exactly as The Electrician has.
Log in or register to reply now!