Here coil 1 and coil 2 are coaxial, with coil 2 being shorter and having smaller area. 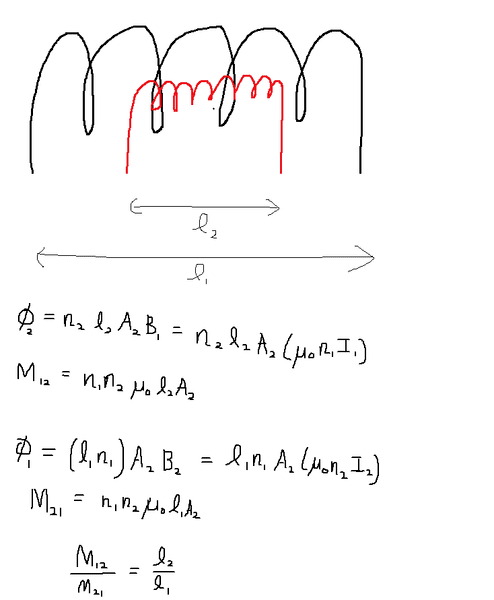 It's correct I think to say that
M21 = N2phi1/i1. That computes to
M21 = N2A2μn1
where N2 is the number of turns in the inside coil 2. This agrees with your expression of M12 (I think you reverse the conventional sequence of the subscripts, but OK).

This is because the flux inside coil 2 is clearly very nearly the same as that inside coil 1.

It's more difficult to argue in the same manner to derive M12 because the question is how much of the flux generated by coil 2 really couples into coil 1.

The answer however has to be such that M12 = M21. I have looked at several derivations of mutual inductance of various coil configurations and in each case they pick the easier computation for Mij and then assume (correctly) that Mji = Mij.
You must log in or register to reply here.

Mutual Induction of a solenoid and a coil

: Self and mutual inductance

Mutual inductance as a psuedo-capacitor?