The last time I remember opening a coconut was when I was younger than 5. I remember really disliking the taste. I also remember the coconut being round, and brown. I've always disliked the taste of dried coconut you find candy made out of, but regardless I decided to purchase a "white coconut" from the grocery today. It has an off-white/beige hull with remarkably, a cylindrical/cone shape like it was grown in a shaped container. Where do these things come from?

By the way, after hacking at it with my knife, I finally got to the water. I remembered hating the way it tasted, but I filled a glass full and ended up drinking it all. Very tasty. The white flesh was also delicious, much different than I remember. I almost couldn't get enough.

Maybe it was just a different species of coconut. Apples come in a huge variety of sizes and flavors. 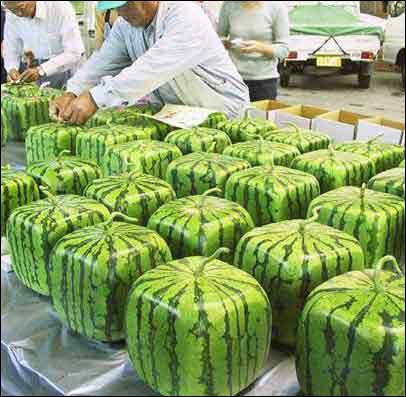 Yeah, I've seen pictures of watermelons like that before, which made me think that it's some kind of "manufactured" variety. In fact, they look like this:http://www.healthydude.com/Resources/thai_coconutsa.jpg [Broken]

I couldn't find information on why they look the way they do with a simple google search, but maybe I'm not trying hard enough.
Last edited by a moderator: May 3, 2017
Moonbear
Staff Emeritus
Science Advisor
Gold Member

Those photos look like they've been cut that way...maybe to catch people's attention to sell more.
awvvu

I think they're grown with containers that restrict its shape.
Greg Freeman

I've also found out that coconut water can be used as an intravenous fluid, straight from the coconut !!!!

I'm picturing some poor guy laid out on a bed with a coconut over him and a tube going straight from it to his arm.
Moonbear
Staff Emeritus
Science Advisor
Gold Member

awvvu said:
I think they're grown with containers that restrict its shape.

Except that the part of the coconut sold in stores grows inside a larger husk that's already cut off.
Evo
Mentor

Moonbear said:
Those photos look like they've been cut that way...maybe to catch people's attention to sell more.

That was my thought. Greg, did these have an inner brown layer with the white coconut just inside? A coconut should have three "eyes" on the inner portion. There is a light green outer husk that is usually removed before they go to market. These appear to have the outer husk cut into this shape.

You can see the sharp edges that were cut.
Greg Freeman

The white outside was relatively soft, and there was a thin, woody husk that was difficult to cut with a sharp knife. It had a pattern kind of like 3 eyes, but not like what I'm used to seeing (3 distinct, round, black eyes), instead it was kind of a much harder, triangular shape that I avoided cutitng by whacking my knife around it. It had 3 distinct lobes, but they weren't circular.
Evo
Mentor

Here they are, they are cut into that shape. Scroll down to the coconuts.

That's what I was wondering too, if they're the outer hull cut and kept on to preserve the quality of the inner coconut. They may cut it for convenience in packaging a smaller, more uniform size (and the nice base gives you something steady so you don't lose a hand trying to hack into it). Though, oy, plastic wrapping a coconut when it comes in it's own perfectly good wrapper.
~christina~
Gold Member

Well you can tell they are cut since even the sticker in the picture has the coconuts as green round "fruits" if I may call them that.

I think the current shape that they are sold in is due to many reasons including, the storage capabilities of the shape that it is in now, and also the "easiness" of being hacked open.
Last edited by a moderator: May 3, 2017
Moonbear
Staff Emeritus
Science Advisor
Gold Member

Evo said:
Here they are, they are cut into that shape. Scroll down to the coconuts.

They have a link on opening the coconut with this gem:

Step 3 - The Angle to Cut
One can drill wholes into the coconut, hit it with a hammer, or toss it out the window.

I've never tried the tossing it out the window approach. We did used to take them out on the patio and give them a good whack with a hammer though (but you lose all the milk that way).
Last edited by a moderator: Apr 23, 2017
Greg Freeman

Ah, it does look like they are cut out of that green husk. It was so good though! Not at all like the dried coconut shavings I'm used to seeing.

I actually ate all of the flesh while I posted this...:uhh: Now I want more!
Cyrus

The best coconuts are the ones from the beaches of Rio De Janeiro and are the size of your head. They cut a notch into them with a machete and put a straw in it. Once you drink it all, they cut the rest of it in half and you eat the insides. Tastes better than any other coconut.

I used to be the same way as you with mangos. Growing up, the stuff would make me gag. I can tolerate it in small amounts now. But growing up if I ate it, Id nearly throw it back up instantly - never knew why either.
Share:
Share

New way to find the Circumference of a Circle

New (old) keyboard is on the way.

N
A new way to raise your children?

The joys of growing old
4

What's The Best Way To Learn A New Subject?