what are the magnitude and direction of the net gravitational force on the 20kg mass.
Now this is kinda tricky but there is an 20kg ball on the origin, and two 10kg balls 20cm above the x axis, and one is 5cm right and the other is 5cm left of the y axis.

Now i thought this question was kinda straight forward, but in the answers in the book the answer is 3x10^-7jN, half of what i got... and i don't know where i went wrong, can someone please help me?

anyone have any idea? i know that -.05i and .05i cancel out, but maybe do you double the .2j value?
malawi_glenn
Science Advisor
Homework Helper
Gold Member
2022 Award

Please wait a bit more. One hour is nothing.

the majority of PF users are sleeping at the moment, so please wait.

fredrick08 said:
Now i thought this question was kinda straight forward, but in the answers in the book the answer is 3x10^-7jN, half of what i got... and i don't know where i went wrong, can someone please help me?

Yes, it is straightforward … but not if you don't draw a proper diagram, and label it carefully.

Use Pythagoras, and try again!
fredrick08

im srry tiny-tim, but i don't see how R can be anything else but R=0.2m... if its not could you please show me why??
fredrick08

hey, and anyone tell me how to paste pictures in the thread? do i need to upload it the net or something? i can't just give the directory of the file on my comp??
tiny-tim
Science Advisor
Homework Helper

fredrick08 said:
yes … but i don't understand why you would use pythagoras since the 2 10kg balls, is the same as one 20kg ball... since the i cancel out? …

ok, you obviously did draw a diagram … my apologies!

But you're trying to make physics too simple … and unfortunately it isn't!

Think of the gravitation force as a vector along the hypotenuse.

(Force always is a vector, of course.)

Then that force is equal to the sum of two forces along the two sides, isn't it?

The x-direction forces are opposite, so they cancel.

It is only the y-direction forces which add up!

But the value of each y-direction force has to be calculated using R for the hypotenuse direction.

Use .206m for R, but then only use the j component of the result.

hey, and anyone tell me how to paste pictures in the thread?

I think you have to upload onto something like photobucket, and then quote the url (leaving out the http://) [Broken].
Last edited by a moderator: May 3, 2017
fredrick08

have you tried doing it yourself? did it work out? i will try and upload a picture, in case I am giving you the wrong picture.
fredrick08

i did a similar problem in class, but that was with m1 and m2 had different i and j values. where you added the component vectors, and then did pythag to find the resultant magnitude... but this one has just confused me, coz it looks simple.. but somehow not as i thought...
fredrick08

btw, thanks everyone who has helped, very much appreciated = )
fredrick08 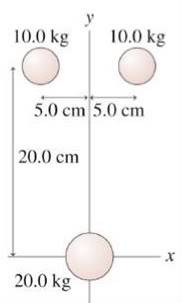 did u get my answer? or is it possible that the book is wrong? i might ask tomoz at uni... thanks heaps anyways = )
Nick89

From the symmetry of the problem we can see directly that the net force on the 20 kg ball will be in the y direction.
Also, the force will be exactly twice the y-component of the force of one ball.

The force by both balls (in the y-direction) will ofcourse be just twice this:

oh ok i see... thanks nick, i didnt realize that there was still x and y components... i gunna ask today anyways, knowing my physics course, they prob got the wrong answer from the book lol.
Nick89

No, the net force is ONLY in the y-direction!
The force of only one of the 10kg balls (acting on the 20kg ball) has a x and y direction.

can anyone explain to me why nick used Fy=FCos(theta) because isn't sin(theta) in the y direction?
jimvoit

Here is an approach that appears to give the answer in the book. It’s a bit brute force but it works for a more general case also.

The net vector result of the field due to m1 and m2 is:

Here is an approach that appears to give the answer in the book. It’s a bit brute force but it works for a more general case also.

The net vector result of the field due to m1 and m2 is:

PS. The key idea here is to set up the two field vectors by multiplying the magnitude of the field by a unit vector in the direction of the field, then adding the vectors to get the resultant.
fredrick08

hi everyone, I am still going at it, the lecturer said today that along the line of wat nick said... but I am still not 100% sure my new effort is

btw my lecturer also said that the answer in the book 3x10^7jN was wrong by a factor of 2... what ever that means...
fredrick08

ive been trying for so many hours and i think what nick did on page 1, is what the lecturer told me to do... can anyone concur that this is correct?
jimvoit

I believe I managed to get the same result as the book by making the same error..That is by computing the forces between the wrong masses.
tiny-tim
Science Advisor
Homework Helper

fredrick08 said:
ive been trying for so many hours and i think what nick did on page 1, is what the lecturer told me to do... can anyone concur that this is correct?

I don't think much of your teacher … telling you the book answer is wrong after you've had all the worry.

It's arguable whether putting answers in the book at all is a good idea … but it's definitely bad to put the wrong answers in, or to leave them with you without telling you!

The only difference I'd make is that you needn't find the angle to find its cosine … cos = adjacent/hypotenuse, so it's just 0.05/0.206
fredrick08

I didn't check the diagram!

ok well I am just gunna call it solved. my final answer is

thanks everyone for your help very much appreciated, i don't really care if its right or wrong now, way too much effort has gone into this question lol = )
Share:
Share

Suggested for: Newton theory of gravity

Newton's laws of motion -- Force of gravity on a skydiver

Choosing what consists of a "system" in Newton's laws of motion

Motion of center of mass under gravity

An interesting question -- Force of gravity and parabolic vs. elliptical paths

To locate the centre of gravity of a rod