1) Find Norton and Thevenin equivalents.
2) Use a series of Norton-Thevenin and series/parallel transformations to reduce a circuit shown into the single-loop circuit. Then, find current I. (Current I is between two nodes at the botom of (1) circuit!)

My way of solution is presented on these pictures.

I have got two exercises which I try to solve. 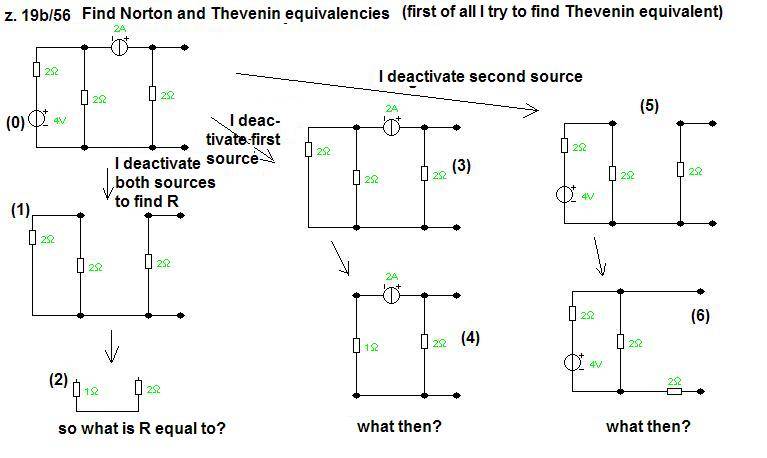 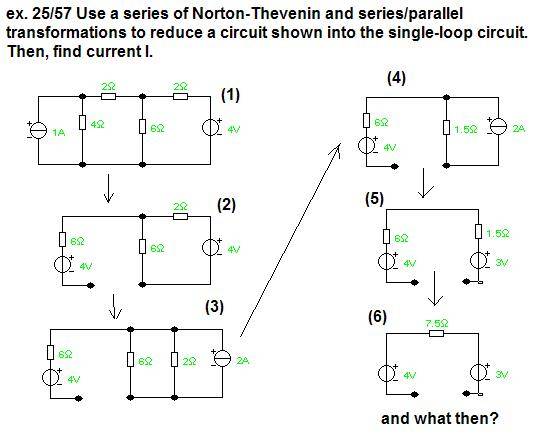 Thanks for help in advance!

So, the method of finding Rthev was correct. However, I am not sure what method you were using in steps 3, 4, 5, and 6. As far as I know, the Thévénin voltage is just the open circuit voltage, which you can calculate directly in this example. It's just the 2 A of current from the current source going through the rightmost resistor, so that 2 A * 2 Ω = 4 V.

This is also obvious because the short circuit current (the current you'd measure across the leads if you shorted them) is 2 A (from the current source)
Last edited: Apr 4, 2008
kawafis44

I thought that Thevenin equivalence can be obtained if I at first deactivate ideal voltage source (3), simplify new circuit and calculate voltage, at second deactivate ideal current source (5), simplify new circuit and calculate voltage. Then add these two voltages and it will be Thevenin voltage. (Analogously I can calculate two currents and add them). But I do not know how to simplify (6) and (7).
What about the second example (Current I is between two nodes at the botom of (1) circuit!)?
Share:
Share

Help on thevenin and norton equivalents