could anyone explain to me how odd harmonics in the power system are reduced or removed? I've read that in transformers the harmonics produced by the load circulate if the secondary side is wired as delta configuration, yet star is usually used on secondary side i believe?

I've looked around a little and I saw that zigzag transformer could help reduce the harmonics, how? I could not find any good explanation about this, also I do not fully understand how a zig zag transformer work.

Are there any other common techniques used to reduce the influence of harmonics in the power system?

Shunt capacitors are sometimes used for that purpose. The higher the frequency, the more a shunt capacitor looks like a short circuit.
OliskaP

anorlunda said:
Shunt capacitors are sometimes used for that purpose. The higher the frequency, the more a shunt capacitor looks like a short circuit.

Are shunt capacitor designed to do both tasks at the same time, or do you have to design them individually?
Svein
Science Advisor
Insights Author

Yes. but a capacitive load also introduces a phase shift which we do not want ( I am sure "anorlunda" can explain that better than I can).
jim hardy
Science Advisor
Gold Member
Dearly Missed

If you draw on a sheet of graph paper three sinewaves 120 degrees out of phase, draw first one brown, draw second one red and third one orange,
(or purple or whatever colored pencil you have)
and then on same paper draw three more sinewaves of 3X frequency , aligning the first zero crossing of each with its corresponding 1X frequency sinewave zero crossing,

you will see that the third harmonics for all three phases are exactly in phase. You'll have to draw all three 3rd harmonic colors overlaid.
http://zone.ni.com/reference/en-XX/help/373375C-01/lveptconcepts/ep_harm_interharm/

That fact has some interesting ramifications
one of which is that in a delta connected winding third harmonic current just runs around the triangle .

Look at picture 1A below, KVL says all 3 windings are in series for 3rd harmonic and the only thing limiting current is the combined impedance of the transformer and its power source.
The third harmonic is short circuited at the Delta winding and the transformer will accept as much of the third harmonic current as its source can deliver. That can burn up a small transformer that's connected to a large source. But a big transformer capable of handling all the 3rd harmonic its source can produce will simply circulate them and clean up the sinewave.
In a wye connected winding the third harmonics combine and flow through the neutral. That can burn out the neutral wire in a distribution system that feeds big nonlinear loads like computers. For that reason NEC was revised to require neutral wire for computer installations be at least as large as the phase conductors. 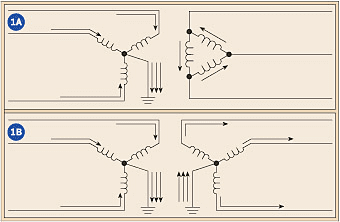 It's common to use a delta winding to short out 3rd harmonics which cleans up the sinewave.
Big power transformers are often equipped with a "tertiary" winding for that purpose. It gives a handy place to get power for the cooling fans.
"o"in this picture means "zero sequence" , for this discussion just call it third harmonic 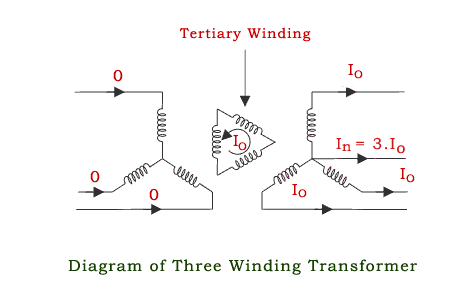 
Zigzag transformer uses two windings in series whose voltage is shifted by 60 degrees, 1/6 cycle.. At third harmonic that's half a cycle, 180 degrees, so the third harmonic voltage in one winding cancels that in the other winding.
http://static.schneider-electric.us/docs/Electrical Distribution/Low Voltage Transformers/Harmonic Mitigating/7400DB0301.pdf

Hope that helps you get started.

Are shunt capacitor designed to do both tasks at the same time, or do you have to design them individually?

Yes they are used for both purposes. There are many designs of capacitors. A design has ranges of voltage, current, temperature, vibration, duty cycle, off gas removal, and so on. I'm not familiar with all the considerations of capacitor design.

But I'm reminded of an incident where my firm recommended $2 milllion in capacitors to filter harmonics from a scrap steel arc furnace in Mexico. But after only two weeks of service, the entire $2M capacitor bank exploded. Explosions are not something you can predict using the capacitance value and Ohm's law.


Svein said:
Yes. but a capacitive load also introduces a phase shift which we do not want ( I am sure "anorlunda" can explain that better than I can).

Transformers also cause phase shift. In fact anything that will be effective will probably cause phase changes. Detailed calculations including harmonics for the whole nearby power grid can be complex, but that might be what you need to predict all the side effects of a change.

To filter harmonics with shunt capacitors without changing power factor can mean adding shunt reactance to compensate the shunt capacitance. The L and C values might cancel at the fundamental frequency, but not at higher frequencies. But with both installed, beware resonances. There are also nonlinear power electronic solutions for filtering and reactive compensation, that can do a better job, but cost more money.

Anything like this costing thousands or millions of dollars for investment (or for consequences) needs a professional engineering study, not a quick answer on an Internet forum.

Thank you all. I hope that some time in the future I will be as knowledgeable within power system as you guys.
LagCompensator

jim hardy said:
Zigzag transformer uses two windings in series whose voltage is shifted by 60 degrees, 1/6 cycle.. At third harmonic that's half a cycle, 180 degrees, so the third harmonic voltage in one winding cancels that in the other winding.
http://static.schneider-electric.us/docs/Electrical Distribution/Low Voltage Transformers/Harmonic Mitigating/7400DB0301.pdf

Actually i'm not expert on them either.
There's a presentation on transformers her, zigzag tarts around slide 39.
http://www.slideshare.net/akashsolanki/2-equivalent-circuits-of-power-transformers [Broken]

Here's a representation of a three phase transformer in 3-d
only one winding is shown. 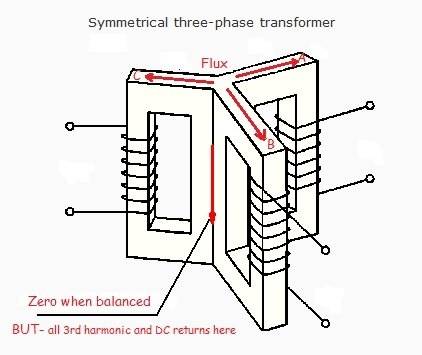 Now connect the windings to make a wye 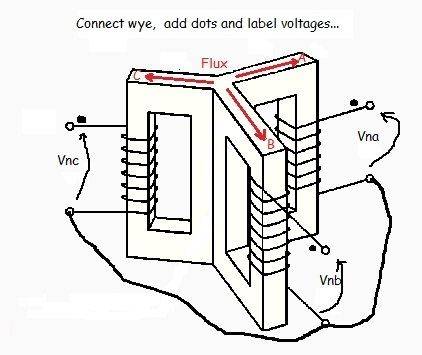 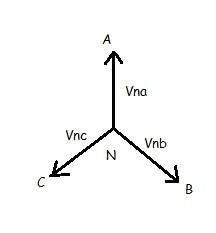 That's straightforward enough.
Now in order to not have a messy drawing let's run a thought experiment.

What i've drawn so far could be showing a primary winding exciting a transformer core .
It could also be a secondary winding on a core that's excited by a primary that isn't shown, couldn't it ?
Indulge me and assume the latter. I'm not good with Paint and it'd take me a week to draw multiple windings, so just remember the core is excited by an invisible primary..... Be kind to the old guy, please.....

Now i will attempt to split my secondary windings in two and redraw the phasor diagram
. 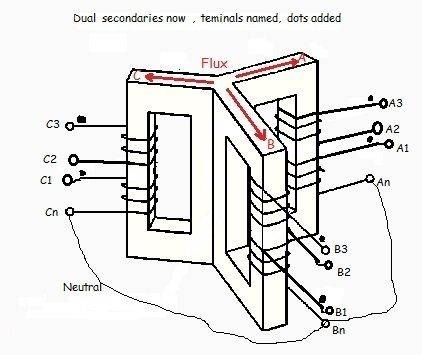 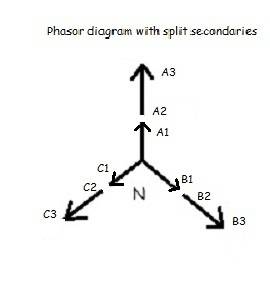 Now let's look at how we'd connect one arm of the secondary to make a zigzag, i'll start at N and go up to A1, then over to C3 and come out C2

system is acting up, my post in progress disappeared for a while so i'll double post this then try to edit it
got about three hours in it and dont want to lose that.

Now let's look at how we'd connect one arm of the secondary to make a zigzag, i'll start at N and go up to A1, then over to C3 and come out C2
and i'll call that new exit point A' 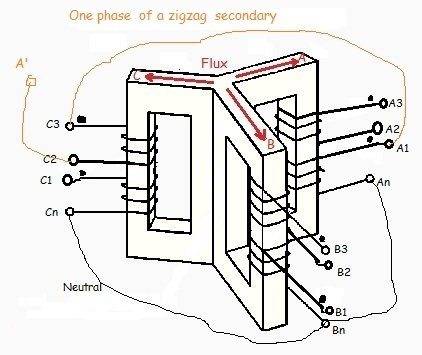 Now let's try for a phasor diagram but so as to get not overwhelmed i'll only draw the one leg we've hooked up.
I'll draw segment N-A1 and add segment C2-C3 to it. Since we went backward through C2-C3 i'll swap his head and tail then slide him up and right to connect C3 & A1 like we wired him. 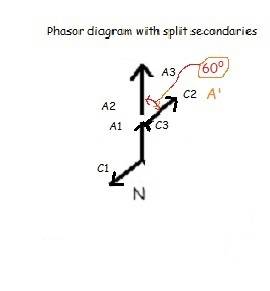 That's how it does 60 degrees, remember from middle school geometry adjacent angles are supplementary.

Now what are the ramifications ?

Consider the flux in the core. Go back to that 3D diagram.
What is mmf from currents flowing in leg A.?
Since it has current from two different phases flowing in opposite directions,
third harmonics will be cancelled and so will any DC content.
That is a big deal - core losses are lessened, impedance of the transformer winding to third harmonics is lessened, and it won't try to walk up the BH curve and saturate from a DC content in the load current.

Aha!
At last i understand what they were trying to tell me about the zigzag connected generator on my control rod drive system. It supplied a half wave rectifier thyristor control that made a few hundred amps of DC to move the control rods.
I've never before succeeded at figuring out the zigzag step by step, just remembered some words... So i thank you for the question.

And i hope anyone who sees a mistake will correct me. First drafts are prone to error.
?

.This post is redundant. It didn't carry the images from previous post and i dont know what became of the attachmed files so i'm leaving it alone for now. If the previous one still looks complete in the morning i'll delete this one, but am not leaving all the eggs in one basket for now.

EDIT , the morning after
Images are still there so i'll get rid of this redundant one.
As always i see little things i missed in my drawing, like one too many turns in phaseB of split secondary 3D sketch, but that's cosmetic.

Thanks guys for the kind words...