Hi everybody, last week I was messing arround with Stelarium; I saw something which bothered me.http://postimg.org/image/l9fsnnqkv/
http://postimg.org/image/l9fsnnqkv/ (link because the image might not be seen) .
As far as I know all planets rotate around the solar equator, but here, Mercury doesn't seem to be alligned with the rest of the planets (It makes sense to the moon, luna, to be close to the ecliptic because at the time, march 19th the equinox was close, and the earht and solar equator were almost intersecting).

So any ideas with what is going on with Mercury?
Thanks.

Mercury looks pretty much aligned in that picture. It does have a somewhat more inclined orbit though, about 7° compared to others <~2°
Last edited: Mar 28, 2015
Frank Einstein

From my pont of wiew is mercury, mercurio the one off
http://postimg.org/image/jtjrbxpif/
wabbit
Gold Member

You're right the deviation is visible in the picture, I wasn't looking closely enough.
Frank Einstein

But I am clueless about why is it there; the planet must rotate arround the solar equator, which as you can see on the right lamost intersects with the earth's, so the planets should be also on that line. I don't get what's going on there
wabbit
Gold Member

I think what we're seeing here is the 7° orbital tilt of Mercury, it doesn't quite lie in the ecliptic plane. As to why that orbit is somewhat inclined I don't know but I would assume past perturbations in the history of the solar system (a very slight initial inclination can get magnified by gravitational interaction with other bodies).

Edit: there is no "must" here, it's more "generally close to" the solar equatorial plane.
Last edited: Mar 28, 2015
Frank Einstein

As far as I know all planets rotate around the solar equator...

... planets do not, in general, orbit exactly in the plane of the solar equator ... in general, they orbit at an inclination. Perhaps this is what you are seeing, along with a distortion due to the projection (the ecliptic will be a curve on that picture).
http://en.wikipedia.org/wiki/Orbital_inclination

Note: the 7deg figure (post #2) is to the ecliptic rather than to the solar equator. since the image is supposed to represent the sky from the Earth, then the planets orbit in the Earth's ecliptic - so it's a reasonable figure to use. For some reason you (apparently) chose to draw your line through Venus and luna, why? If you pick two other planets you'll get a closer fit. By your fit, the Sun is off this "solar equator" too, does that make sense?

If I draw a line using venus and sol, and compare it with the line using merurio and sol, the angle between these, with no other information, can be expected to be as high as 10deg or so, assuming all the planets are well lined up. In general, objects in the same plane in space do not always project to a straight line in the sky.

Can you get the program to put up the line of the ecliptic?
Bandersnatch
Science Advisor

Planetary orbits do not lie all in the same plane. They're inclined to a varying degree. The plane of earth's annual revolution is the ecliptic, and it's what the red line in the picture above approximates. This is not the same plane as the Solar equator - the Sun rotates at a slight angle to the planets.
The orbital planes of all planets (excluding dwarf planets) lie within 7 degrees of the ecliptic, with Mercury having the 7 degree inclination, Venus less than four, and all the other planets lying within 3 degrees of that plane.
So whenever you observe the planets from Earth, they'll lie along a line but with some deviations, and Mercury will have the largest - the angle between the red and yellow lines is roughly 7 degrees.

The third column in that table represents the inclination w/r to the plane perpendicular to the angular velocity of the whole Solar system, which means mostly the orbits of gas giants.

Wow, thank you very much, the three you have been really helpfull. Gess I understand what's going on now.
And by the way, yes I can draw the ecliptic and see that only the Moon, Mercury, and Venus have sensitive deviances from the ecliptic.
guywithdoubts

I'd suggest that you downloaded Celestia. It's free to use. You can see things from any conceivable angle with it. I've never used Stelarium but I guess it doesn't let you see the Solar System from any other perspectives.
wabbit
Gold Member

Thanks, wasn't aware of that.

wabbit said:
As to why that orbit is somewhat inclined I don't know but I would assume past perturbations in the history of the solar system.

It is a bit puzzling that within the same gas cloud, the outer part would have an angular momentum inclined relative to the inner part, but perhaps that's just the random nature of things, after all ~7° isn't huge ?
Last edited: Mar 28, 2015
Jando

guywithdoubts said:
I'd suggest that you downloaded Celestia. It's free to use. You can see things from any conceivable angle with it. I've never used Stelarium but I guess it doesn't let you see the Solar System from any other perspectives.

Works in Stellarium as well, here's a view of the 4 inner planets from a point 300 meters above the surface of Saturn. Catched Venus in almost full phase from there. :) 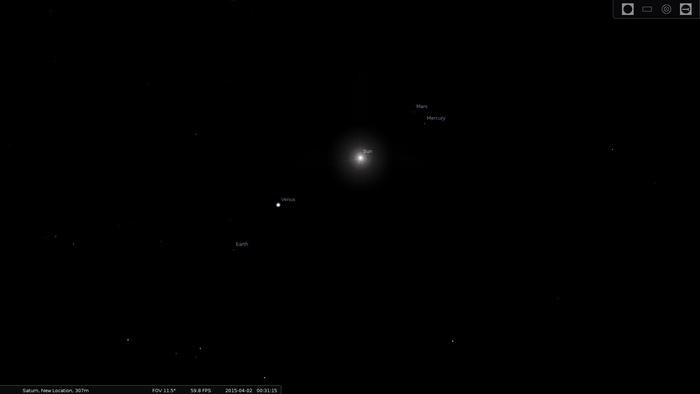 Planetary Alignment (nothing to do with astrology)

K
Planetary Alignment on my Date of Birth