Poles of a broken magnet

Recently I came across an annular permanent magnet (round magnet with a hole in it) which had fallen and broken in half, effectively forming two horse-shoe magnets. I noticed that the two halves had similar poles:

Code:
Therefore it was impossible to put it back together because the two halves repulsed each other one way, and the way the attracted they didn't fit together anymore because it was - of course - not a perfect cut.

I was wondering whether this is a coincidence. Since these magnets are apparently quite expensive it was a bit unpractical to repeat the experiment, but something tells me that one would get this situation every time although I was unable to explain this theoretically.

Are you sure you did not turn one magnet around? That looks line an unusual field configuration for your description of the magnet.
CompuChip
Science Advisor
Homework Helper

Yes, it broke into two uneven pieces. Each of them was about half of the size of the original but the pieces clearly only fitted together in one way.
Nugatory
Mentor

What was the field direction (that is, where were the poles) of the ring-shaped magnet before it broke?
CompuChip
Science Advisor
Homework Helper

FWIW, I think it was a neodymium magnet like this one 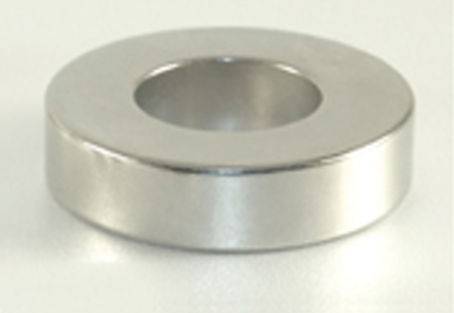 I also tried imagining the magnet is first cut once, giving rise to something like this:

but if you then cut it at the top as well I would expect two halves that attract (ie in the left half a south pole is created at the top) - apparently in the case that I observed the poles of one part got flipped.

I'm also not sure whether such a reasoning would work for a violent event like dropping it from a table.
Last edited: May 11, 2013
physwizard

Hmm, that is an interesting possibility which I didn't consider, physwizard. I would have thought that after breaking the ring in half you would effectively get two horse-shoe magnets.

I guess I could easily find out myself with a piece of paper and some iron filing... maybe I should have done that in the first place :)
Share:
Share

Related Threads on Poles of a broken magnet

M
Question about north and south poles of a magnet.

C
North pole and south pole of a magnet.

S
Magnet vs CRT TV a.k.a question about magnetic poles of electrons

Medium between poles of magnets

M
Should the poles at the end of each magnet be similar?