1. A projectile is launched at an angle of 45.0 degrees above the horizontal and lands at the same level from which it was launched 3.69 seconds later. The magnitude of the initial velocity is _____ m/s

2. If θo is the angle of elevation above the horizontal at which a projectile is launched, the horizontal component of its initial velocity is given by _______.

3. A projectile is launched at an angle of 41.1 degrees above the horizontal with an initial speed of 205 m/s and lands at the same level from which it was launched. The range is 145 meters. The time of flight is _____ m/s.

I really don't know how to work these or find the answer. If somebody could please help me!

I tried. I don't even know how to work it out. If somebody could work it out and find the answer so I can see how, I'd really appreciate it.
SHISHKABOB

sorry, but they don't like it when we just give the answer here :)

does your teacher have any examples of drawing vectors and their components? Try looking at those for reference.
tahmed5

i've tried looking at everything. i am very bad at math... that's why i came to seek help on this forum.
tahmed5

if you could please help me find the answers. i really need to answer these questions very soon. i am in desperate need.
SHISHKABOB

I'm really sorry but I can't just give you the answers, that's not what this forum is for. This forum is for people to get help solving problems themselves, sorry.

this picture should help get you started, though 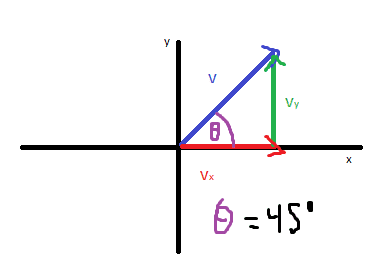