Can anyone explain to me why (when air resistance is ignored), that 45° angle is the ideal angle for the longest range? Is it because if it is over 45° then gravity will be acting on it longer therefore will be dragged down sooner? Also as "u cos >45" produces a lower exit velocity(horizontally)? But what if it is below 45? Then the exit velocity is greater than at 45, but then does the greatest height have something to do with it does travel as far as when the angle is closer to 45.

Also when air resistance is taken into account, there is a force acting in the opposite direction to the velocity, so obviously the range will not be as great, however, how come there is a bigger difference between the ideal and actual ranges at angles above 45 than below? Is it due to f=ma and the fact that the projectile is traveling more in the vertical direction and that the exit velocity would not be as great(horizontally) so it does not take as much force to slow it down than angles lower than 45?
Last edited: Jan 10, 2013

The horizontal velocity controls how much progress the projectile can make per unit time. The higher the velocity the farther it can get in a fixed time.

The vertical velocity controls how much time it will take before the projectile hits the ground. The higher the velocity the more time before it lands.

Clearly a purely vertical trajectory is sub-optimal. You maximize time, but the resulting distance is zero.

Clearly a purely horizontal trajectory is sub-optimal. You maximize horizontal velocity, but the resulting distance is, again, zero.

You can apply the half-angle formula and derive that the maximum must be at 45 degrees because sin(theta)cos(theta)/2 = sin(2 theta) and sin(2 theta) is maximized when 2 theta = 90 degrees so theta = 45 degrees.

Or you can notice the symmetry and realize that if there is a single maximum then it must occur at 45 degrees.

To put it more precisely:

1) The horizontal distance is proportional to the constant horizontal velocity and to the flight time.

2) Since the vertical acceleration is constant, the flight time is proportional to the initial vertical velocity.

Now think of a rectangle with the sides Vx and Vy. Given a fixed diagonal V, the area Vx * Vy is maximized in the case of a square: Vx = Vy or 45° diagonal inclination.
FaraDazed

jbriggs444 said:
Clearly a purely horizontal trajectory is sub-optimal. You maximize horizontal velocity, but the resulting distance is, again, zero.

I assume this is because the flight time is decreased? But why is it? As in how can you tell this from the horizontal and vertical components? The horizontal exit velocity is greater the closer the angle is to 90° for example?


jbriggs444 said:
Clearly a purely vertical trajectory is sub-optimal. You maximize time, but the resulting distance is zero.

How come time is maximized? I always thought the time would be exactly the same no matter what, just like the bullet analogy whereby a bullet is fired from a gun at the same time another bullet is simply dropped, and (if the surface was completely horizontal) they would hit the floor at the same time.

Also, I assume its not going as far because the vertical exit velocity is greater than the horizontal, am I correct in assuming that?


jbriggs444 said:
You can apply the half-angle formula and derive that the maximum must be at 45 degrees because sin(theta)cos(theta)/2 = sin(2 theta) and sin(2 theta) is maximized when 2 theta = 90 degrees so theta = 45 degrees.

Could you go over that in more detail please, or at least explain what it means please?

Well the maths saids so..
FaraDazed

I understand that, I don't think I worded my response very well.


What about when air resistance is taken into account, is there a reasons for a bigger difference in actual and ideal ranges at angles > 45° than < 45°? This one has puzzled me. At the basic level, I think it has something to do with f=ma and the fact its traveling more in the vertical direction but can't seem to figure out why?

Any help is greatly appreciated.
FaraDazed

Can anyone please help with the air resistance thing?

Have a look at the image 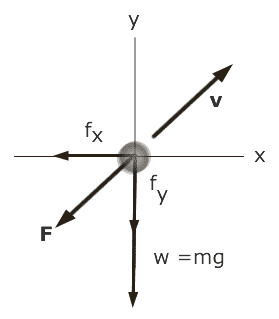 I can see there that if the angle were greater than 45, than the y component of the air resistance would be greater meaning more force pushing it down. Therefore, I can get why there is a big difference between actual and ideal at angles greater than 45(sort of).

But what about when the projectile is coming back down? The air resistance would be pushing it back (like the y component of the Fair is pushing it back into the air), would that negate the effects described in the above paragraph or not?
A.T.
Science Advisor

FaraDazed said:
Could you go over that in more detail please, or at least explain what it means please?

I went into more detail in my post. For even more detail you derive it mathematically. There is no point expressing math with long sentences, because it doesn't make it clearer.
FaraDazed

A.T. said:
I went into more detail in my post. For even more detail you derive it mathematically. There is no point expressing math with long sentences, because it doesn't make it clearer.

OK thank you. I do appreciate your previous help.

I can see it both ways, as if the angle was below 45° the x component of the air resistance is greater than its y, but then it has gravity acting down, and the air resistance simply pushing against it, which would still slow it down. But I am not sure if it would slow it down just the same as above or not as fast?

As A.T. said, why bother talking and arm waving when the Maths says it all so much more precisely? If every bit of Maths needed to be re-stated in conversational terms, we'd never have any advanced Physics. Maths is an appropriate language for this sort of problem so let's use it.
A.T.
Science Advisor

FaraDazed said:
Can anyone please help with the air resistance thing?

For an intuitive grasp consider the extreme case: minimal gravity and extremely high drag. No matter at which angle you shoot, the drag will slow the projectile after about same direct distance to almost zero, from where it will sink slowly and almost vertically. So it is obvious that you have to fire almost horizontally to maximize the horizontal distance.

Projectile Motion with a backwards Rotation/Tumble