Before you go all skeptic on me, I am just curious of the meaning of this: 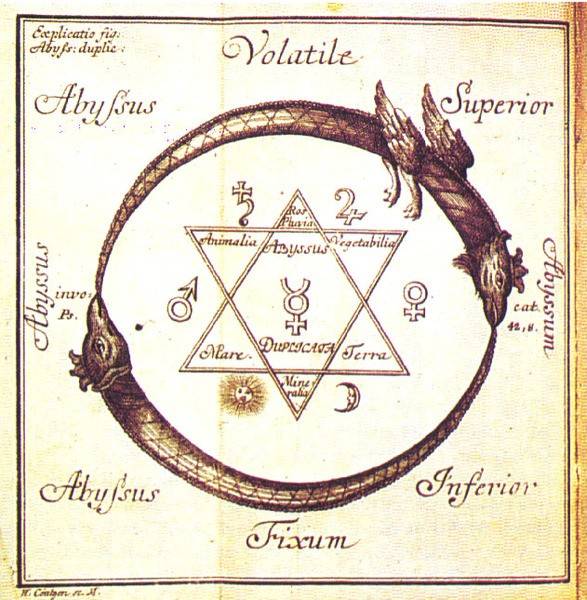 My friend and I are curious.

Raised some assumptions referring to the eternal cycle of life.

I understand it's not exactly within the realms of modern day science, but it's pretty interesting, if even just for the knowledge.

I know a girl who reads Medieval Latin and knows a lot about the times. She's actually attending a scholar's conference in Poland right now, but I'll ask her to have a look at it when she gets back.

Having read Charles Singer's From Magic To Science a couple years ago, I recall that there were a lot of cult-like schools of "philosophy" in the middle ages, each with it's own spin on the structure of the spiritual/physical universe. This looks like a copy of a chart from one of those schools.
Dominance

Excellent, thanks for your reply.


Like I stated, I kind of figured it has something to do with an eternal cycle, and the seven stars, but that's kind of broad, haha.

Always matter being destroyed and created to coincide with some sort of balance, I guess?


Anything spring to mind off the top of your head?
zoobyshoe

Dominance said:
Anything spring to mind off the top of your head?

"Fixum" below, "Volatile" above: suggests they're describing a continuum from immutable to mutable things.

Inside the circle: male on the left, female on the right. A yin/yang sort of dichotomy.

I see: animalia, vegetabilia; mare, terra. Animal, vegetable, sea, earth. I'm sure their positions in the "Star of David" imply something about their relationship to each other.

"Abyssus" just about everywhere outside the circle. It means "depths", "hell", "chaos". (On the right the abyss has some sort of superior and inferior aspect, it seems. ? ) Anyway, things inside the circle are probably structured, coherent things, while outside is unfathomable chaos.

As I said it looks like a "copy" of such a chart. There's something more, say, 16th, 17th, 18th century about it. Maybe the integral-like S's.
micromass

The symbols in the middle of the chart are the seven planets (with the moon and the sun considered as a planet). I think the middle of the symbol is the symbol for mercury, which was of prime importance in alchemy.
The male and female symbol stand for mars and venus.
zoobyshoe

micromass said:
The symbols in the middle of the chart are the seven planets (with the moon and the sun considered as a planet). I think the middle of the symbol is the symbol for mercury, which was of prime importance in alchemy.
The male and female symbol stand for mars and venus.

That gives us seven planets and seven elements:

Also, the "Star of David" might be a combination of earth and air, from the four basic elements section of that Wiki article (it wouldn't let me copy and paste).
Evo
Mentor

Dominance did you have some point? If you do, I'm not seeing it.
zoobyshoe

Evo said:
Dominance did you have some point? If you do, I'm not seeing it.

He just seems to be curious what the chart means. I find it to be of interest how those "philosophers" thought. Newton, himself, probably had a few charts like this around: Newton scholars say he wrote more about alchemy than about physics, and that he was trying to find a way to change lead into gold.

Evo said:
Dominance did you have some point? If you do, I'm not seeing it.

No point to make, like I stated, I was just curious about the meaning behind it; I did not know what said diagram meant, so I figured I'd ask on a forum where there might be people with some form of background on the matter.

Thank you for the link.


Thanks for all of your input, I appreciate it.
AlephZero
Science Advisor
Homework Helper

Different bibles have different divisions of the book of Psalms, and so
"Invocat Ps 42.8." probably refers to Psalm 41 verse 8 in modern Protestant bibles, or the second half of the verse.

An evil disease, say they, cleaveth fast unto him: and now that he lieth he shall rise up no more. (KJV.)

Referring to the circle formed by the serpent (= Satan?) and dragon (= St Michael?), I suppose.
pachanko
To Sum It All Up...

You guys did well analyzing this image and got most of the major aspects of it. I just want to post a complete description in case people stumble upon this page while googling and want to know exactly what the image contains.

There is a snake and winged serpent or basilisk in a ouroborus shape. These represent the elements Air and Earth. Showing them together as a ouroborous signifies the union of opposites. (This is very similar imagery to what the Egyptian Pharaohs all wore on there headdress, a vulture and a cobra, representing Upper and Lower egypt, air and earth, the union of opposites.) They are both wearing crowns, symbolizing they rule their two domains.

Volatile and Fixum refer to these air and earth figures, one is movement, the other unmoving, fixed. I think the best translation for these two words in this context would be "momentum" and "inertia".

In the middle is the Seal of Solomon which is a triangle and an upside down triangle representing the elements Fire ▲ and Water ▼ merged. So again, it is the union of opposites. Now we have all 4 basic elements represented. Air, Earth, Water, Fire.

Around the Seal of Solomon we have the 7 heavenly bodies, the planets. Each Planet also represents a metal and of course a god.

Mercury is in the middle, which might surprise the modern reader who would naturally put the Sun in the middle. However Mercury (the element) was very important to the alchemists because it had a duel nature that fascinated them.

"For the alchemist, quicksilver (mercury) meant the concrete, material manifestation of the spirit Mercurius"... "Mercury has two forms "mercurious crudus or vulgi" (crude or ordinary quicksilver) and "mercurious philosophorum (the spiritus mercurialis or the spirit Mercurious, Hermes-Nous) who hovers in the sky as the golden lightening-snake or Nous Serpent."
C.G. Jung Collected Works Vol 9. Part 1. Paragraph 554.

This also ties the ouroborous image on the outside into mercury in the middle. "Mercurius forms a word-encircling band"..."Mercurius is a serpent or dragon in alchemy ("serpens mercurialis")". .." According to the old view mercurius is duplex, i.e. he is himself an antithesis. Mercurious or Hermes is a magician and god of magicians... His magicians wand, the caduceus, is entwined by two snakes"
C.G. Jung Collected Works Vol 9. Part 1. Paragraph 553.

So far we have very strong "union of opposites" or "Mysterium Coniunctioni" imagery, much like a western "Ying Yang" symbol. What else do we have?

Inside the Seal of Solomon are animalia (animal), vegetabilia (vegetable) and Mineralia (mineral); mare (sea), terra (land), Ros Pluvia (dew rain) . So we have again, basic classifications ( if we take "dew rain" to refer to the sky, clouds, etc). Dew refers to a singular drop while pluvia is the multiple rain.

Ros Pluvia is above and mineralia is below, perhaps hinting at the dual nature of mercury which is both mineral and liquid. Either way Ros Pluvia is a slightly odd term, but it does fit in with the next part:

"abyssum abyssus invocat" is a biblical verse "the deep calleth the deep" which is Psalms 42:8. (The image even says Ps 42:8) http://www.bible.is/LTNNVV/Ps/42/8
This quote is about the sound of falling water, so may relate to the "ros pluvia"? But more deeply, how the "opposites" call to each other and long to be joined and integrated into one-another.

Abyssus Superior and Abyssus Inferior which means Upper Void and Lower Void. Im not really sure, it's a stretch but could it be heaven and hell? Abyssus is often mistranslated as hell. I'm not really sure, but again it does reinforce the motif of opposites.

Thats all I got for this image. Thanks for posting it!
Last edited by a moderator: Jun 2, 2013
lisab
Staff Emeritus
Science Advisor
Gold Member

Sorry, pachanko, I think you have the wrong place. We're a science forum - no astrology or psychics here.
Last edited: Jun 2, 2013
Evo
Mentor

lisab said:
Sorry, pachanko, I think you have the wrong place. We're a science forum - no astrology or psychics here.

That's my fault, I didn't previously lock the thread and he was just answering an open thread. But locking it now is correct.
Borek
Mentor

Come on, nobody ever treated this diagram seriously as a "scientific", pachanko just gave an interesting analysis I would expect from - say - a science historian.
Log in or register to reply now!

Web Diagram linking All Science together

How to improve handwriting and diagrams