I'm taking my first Physics course dealing with electricity and magnetism, and I am finding it incredibly difficult. I have a number of questions that are driving me insane, and I hope that some of you will be able to clear things up for me--I would greatly appreciate it.

We are covering capacitors now, and there are a couple of things that confuse me. As we just finished the chapter covering simple circuits and resistance, we learned that no current would flow across an open circuit. Now, we are given a description of a device that essentially sounds like it "opens" the circuit--a gap between two plates that somehow "stores" energy by accumulating opposite charges on both plates.

How does charge accumulate on the plates if no current flows?

We have learned that in conductors, charges will automatically redistribute to outer layers and align themselves in such a way as to "cancel out" electric fields, or minimize the force exerted on them by neighboring charges. But then, we heard that the "drift velocity" of charges is incredibly slow. When these charges redistribute, is current flowing? If so, does it flow for a decent amount of time, since it takes time for the charges to migrate toward the surface?

My professor is content to prove everything mathematically, but I'm not the kind of person that can "divide everything by E" and all of a sudden it makes sense. As I don't have a good conceptual understanding of what the mathematical symbols represent, I'm hesitant to put any faith in them whatsoever (although definitions aren't a problem).

Can anyone tell me where I'm messing up?

Related Other Physics Topics News on Phys.org
shpongle
You are right, there is no charge flow between the plates.

I hope this helps!
alienprophecy

It does, shpongle--thanks :) So current does flow when a battery is hooked up, even though this is a sort of "open circuit." Maybe I'm being too rigorous with the wording, but it's frustrating at times when you are given a strict definition, then later referred to that strict definition as evidence of an answer, then suddenly the book says that there is no current but charges just happen to be moving.
Delta Kilo

alienprophecy said:
When these charges redistribute, is current flowing? If so, does it flow for a decent amount of time, since it takes time for the charges to migrate toward the surface?

Time constant τ=RC, is the time to charge capacitor C through series resistor R to 63% of the applied voltage, the actual charge curve is V=V0(1-e-t/τ). 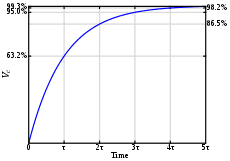 τ is a measure of how fast things settle down. For ordinary wires C might be in pico to to nano Farads and R is in fraction to single-digit ohms, so τ is in nanoseconds. For R=10K and C=100uF, τ=1second.
jim hardy
Science Advisor
Gold Member
2019 Award
Dearly Missed

Get a capacitor and an analog multimeter the old fashioned kind with a moving needle.

You'll need a decent size capacitor, a few microfarads.
A $9.95 multimeter from Wal-Mart will do, or borrow a good one like Simpson 260.

Place multimeter on highest ohm scale. RX10K if it has one.
Connect multimeter across capacitor leads and observe meter "blips" upscale on first contact but not on subsequent ones. That's because the multimeter charged the capacitor to whatever is multimeter's internal battery .

Reverse leads and observe bigger blip on meter.
That's because charge on capacitor was reversed this time so twice as much charge moved through the meter.

It took current through the moving coil of that multimeter to deflect the needle.
That should convince you that current flows briefly "through" a capacitor when voltage across it is changed.. That's what D..Kilo is saying in his more complete post just prior.

the energy is stored in the electric field between the plates.
No charge moves throough the dielectric, it just squeezes closer together on one plate and rarifies on the other.
So the charges (electrons* ) coming out one wire are not the same physical ones that went in the other wire, but since electrons are interchangeable we maintain the illusion that current flowed through the capacitor..
There'll be more about current and actual motion of charges later.

Have fun in class and keep asking questions.
The formulas make sense once you get a handle on difference between charge and current.

* i said electrons, but if you prefer, think in "positive units of charge" for the conventional current you doubtless use .
Last edited: Mar 8, 2012
drewk

Capacitor: A two terminal device across which the voltage cannot change instantaneously

alienprophecy said:
. . . .Now, we are given a description of a device that essentially sounds like it "opens" the circuit--a gap between two plates that somehow "stores" energy by accumulating opposite charges on both plates.

How does charge accumulate on the plates if no current flows?

We have learned that in conductors, charges will automatically redistribute to outer layers and align themselves in such a way as to "cancel out" electric fields, or minimize the force exerted on them by neighboring charges. But then, we heard that the "drift velocity" of charges is incredibly slow.
. . . .

Firstly, it is the electrons that flow very slowly. Electrons enter one end of a wire and a different set of electrons exit the other end. The Charge flowing is how many electrons enter (or leave) in a given time and the rate at which the effect is felt at the far end is limited by c and not the drift speed of the electrons.
When you apply a PD across the plates of a capacitor, the atoms in the dielectric will stretch / distort / polarise and this will allow more electrons to congregate on the negative plate and fewer on the positive plate. With much more than 10^20 electrons around, you don't have to worry about running out of them for this to happen. Even when there is just a vacuum, there is still an imbalance of electrons on the two plates - without any current actually in the gap. Of course, eventually, then the capacitor is 'charged', the potential energy that the electrons acquire by being displaced in this way, is equal to the PD across the gap and the electrons are in equilibrium. The 'Charge On" a capacitor is a differential charge and not a net charge at all.
I recommend that, having got electrons out of the way by considering the above, you avoid dealing with them in your circuit work again until you go to the sub-device level of discussion. You will not find many serious explanations about basic circuit behaviour which are based on electron flow - for good reason; they are really a red herring for most purposes. Before you take exception to this advice I would ask you to consider whether you talk at molecular level when you do mechanical engineering calculations or whether you consider the solid state Physics at work in your computer whilst you are chatting on this forum. No, you treat all of life in layers and deal with one layer at a time.
I had a teacher friend who tried to teach Lower School Science in terms of Particles, rather than good old concrete level forces and energy. Poor kids never got his 'particle explanation' of Convection and I think he gave up in the end. Hot air expands and gets less dense - is displaced by more dense cold air; all you need to know to build a hot air balloon.
Last edited: Nov 28, 2013
CWatters
Science Advisor
Homework Helper
Gold Member

So current does flow when a battery is hooked up, even though this is a sort of "open circuit."

For all practical purposes you can model a capacitor as if current flows through it. If negative charge carriers flow into one plate and out of the other then you would measure the same current on both ends of the capacitor. Draw a capacitor and the arrows that would indicate the flow of charge and you'll see.

There is even something called the displacement current that happens between the plates so for all itents and purposes the capacitor can conduct current when it's charging and discharging.
sophiecentaur
Science Advisor
Gold Member

This is another one of those topics about 'what is really happening' and you can waste hours of pointless fretting on stuff like this.
I don't know why people make such a 'thing' of the idea of current flowing through a capacitor. If you measure the current on both sides of a capacitor, it will be the same value and in the same direction. There will actually be a displacement of charges in the dielectric of the charging capacitor, as the molecules polarise. Can you really suggest that there is any essential difference between that movement and a flow of electrons from atom to atom in a metal? The actual distances moved by the electrons are fairly comparable in the short term. The only difference is that the volts across a resistor will stay the same but the volts across a capacitor will increase as the unbalanced Q increases and the capacitor 'charges up' and the local potential across the dielectric molecules builds up.
If you are dealing with AC, then, whether you are considering a capacitor or a resistor, different electrons will be involved on either side of the component (even with a resistor, the electrons will never actually get from one end to the other of a resistor during a cycle of AC.
Log in or register to reply now!

Related Threads on Question Regarding Capacitors

Some questions regarding capacitors

Question regarding Energy in Circuits with Capacitors