Monitoring earthquakes underneath the 10,200-foot Redoubt Volcano about 100 miles southwest of Anchorage, scientists from the Alaska Volcano Observatory warned that an eruption was imminent, sending experienced Alaskans shopping for protection against a dusty shower of volcanic ash that could descend on south-central Alaska.

"Every time this happens we do get a run on dust masks and goggles," said Phil Robinson, manager of an Alaska Industrial Hardware store in Anchorage. "That's the two main things for eye and respiratory protection."

. . . .
The observatory, a joint program between the U.S. Geological Survey, the University of Alaska Geophysical Institute and the state Division of Geological and Geophysical Surveys, was formed in response to the 1986 eruption of Mount Augustine.

It has a variety of tools to predict eruptions. As magma moves beneath a volcano before an eruption, it often generates earthquakes, swells the surface of a mountain and increases the gases emitted. The observatory samples gases, measures earthquake activity with seismometers and watches for deformities in the landscape.

On Nov. 5, geologists noted changed emissions and minor melting near the Redoubt summit and raised the threat level from green to yellow. It jumped to orange — the stage just before eruption — on Sunday in response to a sharp increase in earthquake activity below the volcano.

Alaska's volcanoes are not like Hawaii's. "Most of them don't put out the red river of lava," said the observatory's John Power.

"It's a very abrasive kind of rock fragment," Power said. "It's not the kind of ash that you find at the base of your wood stove."

The particulate has jagged edges and has been used as an industrial abrasive. "They use this to polish all kinds of metals," he said.

The Alaskan and Cascade volcanos tend to erupt with ash, and in some cases, e.g. Mt. St. Helens, explode or rupture.

Related thread - "Flying through volcano ash?"
https://www.physicsforums.com/showthread.php?t=249594
Last edited by a moderator: May 3, 2017

Which makes me recall this thread.


lisab said:
This isn't purely an Earth science question, but I don't know where else to post it. Recently, the Kasatochi volcano erupted in Alaska. It brought to mind something that happened to me a long time ago that I have always wondered about.

In 1989 I was flying from Alaska to Seattle. Days earlier, Mt Redoubt - a volcano in the Aleutian chain - had a big eruption. Most flights out of Anchorage were cancelled but I was surprised that my flight was scheduled to go.

Just minutes into the flight, the cabin was filled with airborne ash. It was so thick that it bothered everyone's eyes and if you ground your teeth together, you could feel the grit. I recall a slight sulfur smell.

It only lasted maybe 10 seconds. The flight went on without incident.

I always wondered were ever really in danger? What's the protocol for flying through a volcano plume?

That ash is very destructive because it is fine enough to get into tight places in mechanical equipment and it is sharp-edged enough and hard enough to abrade metals, glasses, etc. I still have a 35mm film-can of dust from Mt. St. Helens sent by a friend. Good friends of mine lived not far from there, and when Steve opened the sliding door to let their cat inside an all-gray cat ran in, not a black one. He was going to try to catch the stranger and throw him back outside when he noticed that everything outside was gray - covered with fine ash.

There was a huge run on vehicle air-filters, paper dust masks, goggle, etc - just as was mentioned in the Mount Redoubt article. Masking tape and polyethylene sheeting was very popular, as well, because people wanted to reduce infiltration of that fine ash into their houses.
Last edited: Jan 30, 2009
OAQfirst

It has a variety of tools to predict eruptions. As magma moves beneath a volcano before an eruption, it often generates earthquakes, swells the surface of a mountain and increases the gases emitted. The observatory samples gases, measures earthquake activity with seismometers and watches for deformities in the landscape.

Anyone know why this happens? And what exactly is being swelled?


Some volcanic eruptions are explosive and other are not. How explosive an eruption is depends on how runny or sticky the magma is. If magma is thin and runny, gases can escape easily from it. When this type of magma erupts, it flows out of the volcano. Lava flows rarely kill people because they move slowly enough for people to get out of their way. Lava flows, however, can cause considerable destruction to buildings in their path. If magma is thick and sticky, gases cannot escape easily. Pressure builds up until the gases escape violently and explode. In this type of eruption, the magma blasts into the air and breaks apart into pieces called tephra. Tephra can range in size from tiny particles of ash to house-size boulders.

Looks like activity may be intensifying as reported this morning.

Tremors, earthquakes shake Redoubt
...Mount Redoubt has experienced "high-intensity" volcanic tremors this morning but has not erupted, scientists at the Alaska Volcano Observatory report.
... The first tremor event was recorded from 2:44 through 2:50 a.m., volcanologists said. A second, short burst occurred at 8:47 a.m.

"Since then a series of small, repeating earthquakes is ongoing," the observatory reports.

I saw additional reports that the Air Force has flown some of their nearby planes down to Washington state.
Last edited by a moderator: May 4, 2017
LowlyPion
Homework Helper

Starting at 11:18 AKST (20:18 UTC), a burst of more intense seismic tremor occurred. This episode lasted for about 4 minutes and was the most most energetic since January 30. Radar and pilot observations confirm our analysis that no eruption occurred. Web camera and satellite images from this morning have been obscured by clouds.

Video of the Redoubt eruption the other day.

Picture from today - though it changes - from the cam looking at Redoubt. 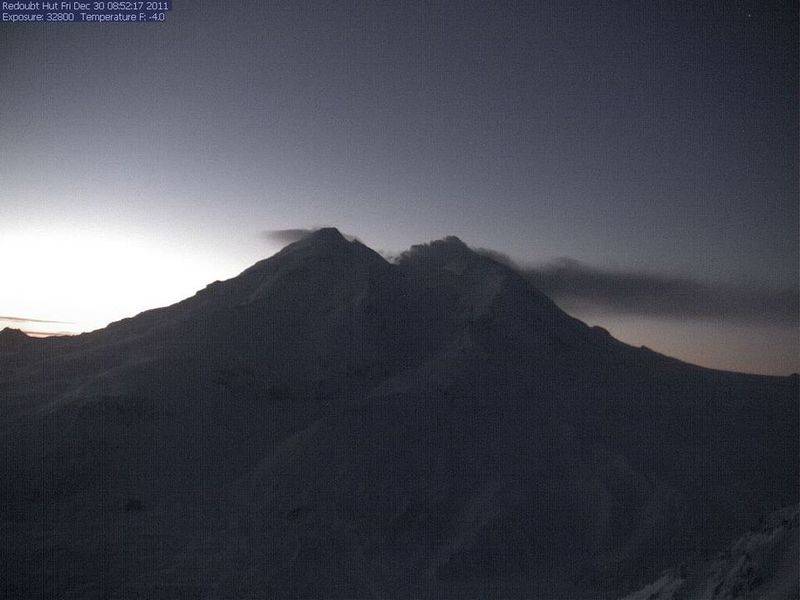 LowlyPion said:
Video of the Redoubt eruption the other day.

The bottom one looks like the devil wearing a tutu, great pics.
LowlyPion
Homework Helper

wolram said:
The bottom one looks like the devil wearing a tutu, great pics.

It's easy to see how the ancients when presented with such phenomenon invented myth to try to absorb the reality of it all.

For instance that is one tutu I wouldn't want to be looking up at.

The portfolio of pics from Anchorage at the ADN site, from the modest ash splashes in town to the more massive plumes looming from over the horizon give a day in the life look at the reality of living even that far away from the vent holes.
LowlyPion
Homework Helper

Another event this morning.

For those interested in following Redoubt, the AVO has a Twitter account, so you can sign up for more than you want to see or know about what's going on there, without having to wait for the news services to let you know which way the ash is blowing.

B
Underneath Hawaii's Kilauea Volcano

A new volcano in Mexico?