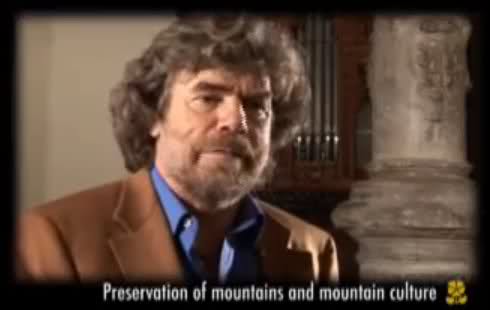 Long before climbing peaks at or above 8000 meters became the fancy of modern day dreamers and serious climbers alike, there was a young upstart Italian, a dreamer, gifted climber, who invented the Alpine Style of climbing out of necessity, who with fellow climber Peter Habler became the first pair to climb Mt Everest alone without oxygen in 1978. On top of this the final ascent from the South Col to the summit only took them eight hours without oxygen, whereas climbers today with oxygen take at least twelve. They did not have a team of sherpas to carry their food, water tents, and sleeping gear, they carried it themselves.

Two years later Reinhold became the only man in history to climb Mt Everest again, this time solo, although he did bivouac with other teams on the mountain. He has gone on to be the first person to climb all http://en.wikipedia.org/wiki/Eight-thousander" [Broken] he said after returning to base camp after the solo ascent and descent, I am paraphrasing because I have since given my copy away to others who wanted to learn of his achievements, that if he had to do it again he doesn't know if he would succeed because even with all of his ability, he found himself at his limit in his solo attempt.

I highly recommend the book, and for 16 $ and change used may buy a used copy to have and read again. The pictures even for the seventies are well done. I especially remember one where he is climbing a blank wall of ice, with cobalt blue sky above him, the ice beneath his feet was jet black, it struck me as the essence of discovering who and what you are. In another shot from above, he is seen putting his ice ax into a steep ascent probably on the order of 50+ degrees, the caption reads simply something to the affect, the will makes the mind an arrow.

I think for those of us born after 1980, many don't know of Reinhold Messner, a dreamer and gifted athlete, who shied away from the media spotlight, allowing only enough coverage to ensure funding for future climbs. I thought it fitting that he be recognized as one of the greatest examples of the true spirit of climbing, who has inspired many others and he has somehow stayed true to himself in the process. Here's to you Reinhold, you deserve it.

Video's for your review, enjoyment:

To respond to this nine year old thread I agree with the OP's assessment of Rheinhold Messner, though he is involved in many business ventures related to his exploits and even entered regional politics for a time as a Green Party member of the EU Parliment representing South Tyrol in Northern Italy.

I confess to not viewing the Youtube videos but have seen mountain climbing films such as "K2" many times for inspiration and have read many non-fiction books by and about Messner and other climbers. I understand Messner's adventures provided inspiration for the characters in "K2" though the story is loosely based on the accomplishments of American climbers Jim Wickwire and Louis Reichardt. The nearly poetic dialogue in "K2" as climbing partners played by Matt Craven and Michael Biehn descend from the summit owes much to translations of Messner's prose.
You must log in or register to reply here.

WSJ and the stuff of legends

News The passing of a legend-Nelson Mandela is dead

Another internet legend: Is This a Real Djinn?