Relativistic treatment of the magnetic force from a current loop

There are plenty of examples where someone derives the magnetic force from a current carrying wire on a moving charged particle by looking at the frame of the particle and finding that the current has Lorentz contracted in such a way as to produce an electric field in an otherwise neutral wire. They then say that magnetism can be deduced from just electrostatics and SR.

Has anybody ever seen this done for a wire loop? Or for, say, an electron orbiting a nucleus a la crude model for magnetic dipole?

My understanding, based on some remarks by Jackson in "Classical Electrodynamics" (that I'd have to hunt down to quote exactly), expressed simply (I hope it's not oversimple, but wont guarantee that) is that you can't sensibly assume that the only force between charges is the 1/r^2 coulomb force and get consistent results when you apply the Lorentz transform to transform the forces to a different frame. The details of a formal derivation would involve knowing how forces are "supposed" to transform, which would require a bit of a diversion into 4-vectors and tensor transformation laws and the idea of covariance, which seems to loos a lot of the audience :(.

The magnetic field is one of the simplest ways of "fixing" the coulomb force law (by adding additional force terms) to get a force law that transforms properly via the Lorentz transform.

A more technical way of making what is supposed to be the same point: The lorenz force law F = q(E + vxB) is covariant, the coulomb force law F = q/r^2 is not covariant.

So something has to be added to the electric field to make electromagetism consistint with the Lorentz transform, the simplest thing to add is just what Maxwell's equations add, the magnetic field.
jartsa

When we derive the magnetic force from a current carrying straight wire, the "straight wire" is actually a small segment of a large loop, isn't it?
bcrowell
Staff Emeritus
Science Advisor
Insights Author
Gold Member

Thanks for that bcrowell, that was a useful thread.

This is what I came up with: 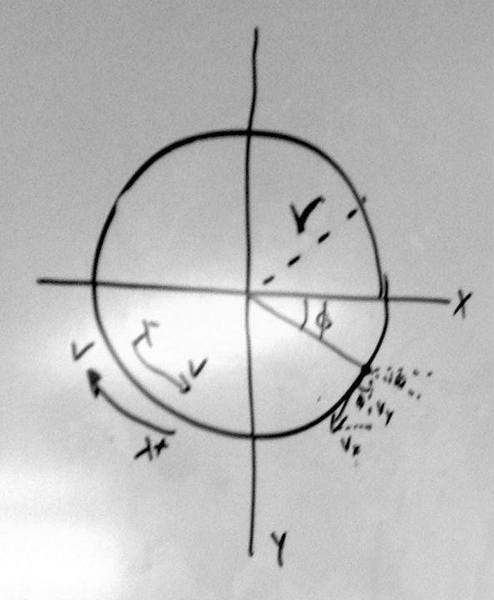 I bent a uniform linear charge density in a circle such that each charge is experiencing uniform circular motion. Two, actually, a positive one going clockwise, and a negative one going counter clockwise. Thus, the total current is 2 λ v in the CW direction.

Then, I wanted to represent this relativistically, so I built a four vector for both charge densities. Normally, they would be represented by Jα, but since these are linear charge densities, I use Iα:

Near the center of the loop, close to the axis, the magnetic field is given by ##B=\frac{\mu_0 I}{2r}## with ##I=2\lambda^{+}v##. The zero in the first term of the four-vector shows that there is no net charge density, and thus no electric field anywhere.

What does this loop look like when boosted in the +x-direction (to the right in the figure) at speed ##u##? Simply perform the Lorentz transform ##L^{\alpha}_{\beta}I^{\beta}_{tot}## to obtain

Any comments would be appreciated, but as this was ages ago I expect most people have moved on.
Log in or register to reply now!

Magnetism results from relativistic effects on a moving charge?

I Consistent Treatment of Forces

Relativistic motion of a magnetic sail

Magnetism as a relativistic effect