I've been thinking about this on and off for awhile now. It first started with the idea of a solar trap.

I was pleasantly surprised some form of this technique is used in the high efficiency solar water heaters.

So what stops one doing this in reverse? having a visible reflector, IR transmitting layer.

Could this allow solar cooling during the day? It would of course depend on the net flux of radiation, perhaps looking at natural sunlight spectrum there maybe a band strongly absorbed by the atmosphere that is within the range put out by a black body.

For many graphs of atmospheric transmission and absorption and further references, you may go here:
http://www.google.com/search?q=atmo...gW-hLiaDw&sqi=2&ved=0CGMQsAQ&biw=1286&bih=621
lostminty

Germanium seems a good candidate, for a better view

based on this calculator
http://www.calctool.org/CALC/phys/p_thermo/wien 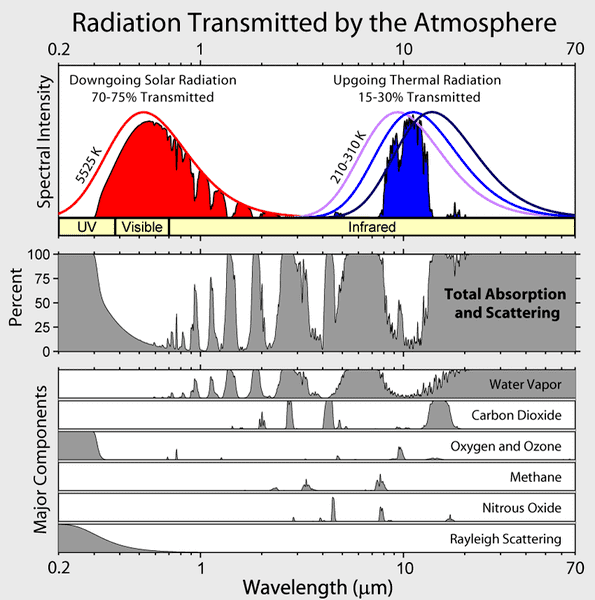 there's some absorbance around that wavelength
Last edited by a moderator: May 6, 2017
lostminty

So, after a bt of googling. This turns out to exist.

Although, they don't quite cover the spectrum that would be optimal, the limit currently for commerical mirrors is up to 2500nm,This is usually layered dialectric coatings.

Germanium does a good job, although the ROI would be terrible, silicon, which does about 1600-7000nm would be ok, though im guessing cost wise it wouldn't be much better.
Log in or register to reply now!