Here is my question:

To my understanding aerofoils on an airplane air flow moves (horizontally) in the same direction as the motion of the aircraft; the aero foil then creates a pressure difference and an unbalanced force and lift is generated. Rowing blade manufacturers throughout their literature (see link below) talk about lift and angle of attack etc. What I do not understand is that how can you have lift when the direction of motion (the path the blade goes through the water) is largely perpendicular to the leading edge of the blade? Or is the flow that generates lift simply a function of the horizontal component of the water that flows over the blade. Any insight (or things to further research) and how one could being to optimize a blade would be greatly appreciated.

Disclaimer: I have not taken fluids yet

http://www.concept2.com/us/oars/pursuit/blade_path.asp [Broken]
Last edited by a moderator: May 5, 2017

"Lift" is usually defined as the component of the fluiddynamic force perpendicular to the relative fluid flow. The parallel component is called "drag". Even if most of the force on the paddle is drag, there might be a significant lift in some phases of the stroke.

But they also might mean something completely different by "lift", like the vertical to surface component.
AlephZero
Science Advisor
Homework Helper

I agree with post #2. The "lift force" and vortices are not the the main forces propelling the boat, though optimizing them may be a useful secondary effect.

The main force is actually the drag force caused by trying to push a flat plate (the oar blade) backwards through the water, perpendicular to the surface of the plate. The oar works as a lever to transfer the force to the boat. Since a racing boat is much more streamlined than the oar blades, the boat moves forwards much further than the oar blade moves backwards, relative to the water. If you row a heavy dinghy with short oars, the opposite is true!

You can easily see the small amount of motion of the oars trelative to the water if you look at a rowing eight travelling at racing speed. The oars enter and leave the water almost vertically relative to the water, and at every stroke the 8 oars enter a new undisturbed section of water and leave a set of small vortices when they leave the water. Presumably the improved oar design minimizes the energy that is wasted in creating those vortices.
sophiecentaur
Science Advisor
Gold Member
2020 Award

I would normally be skeptical of manufacturer's blurb but, bearing in mind that there are a lot of quite bright Engineering and Science types involved in rowing, I guess there may be something in the concept of 'lift'. I think that high performance blades are, in fact, curved. The turbulence would produce low pressure on the forward facing surface of the oar, which would reduce slippage through the water. You 'could' call that lift.
willem2

If you look at the direction of incoming water that the oar sees, it's clear the oar has a small angle of attack much of the time. 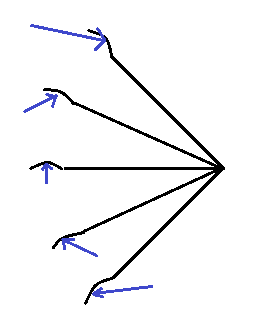 That looks pretty convincing - possible the actual range of angles could be a bit smaller. It is reasonable to suppose that the right shape of curve could produce a useful lowering of pressure on the convex side of the blade - so less slippage. I use a pair of conventional 'seagoing' oars on my 10' tender. They do slip quite a lot - but then, the boat itself is relatively like a brick, compared with a rowing 8. The length of a racing blade will be much greater so that the speed of the boat relative to the stationary (in the water) blade can be high. (A distance multiplier type of lever)
Share:
Share

Related Threads on Rowing and lift

Rowing the water out of a rowboat

Equation of projectile with drag and lift

Determining the coefficient of lift