Rule 30 and The Golden Ratio

I was messing around with cellular automata and wanted to test a theory i had.

If you look close at the elementary cellular automata Rule 30 you'll notice that the right
side is chaotic, while the left side has chaotic properties but it does have order and
repetition.

There is an imaginary line that you could draw that separates the two sides that slopes
slightly to the left.

My theory was that the ratio of the right side and the left side of each row follows closely to
the Golden Ratio.

Is this just a coincidence? Or is there something to this? 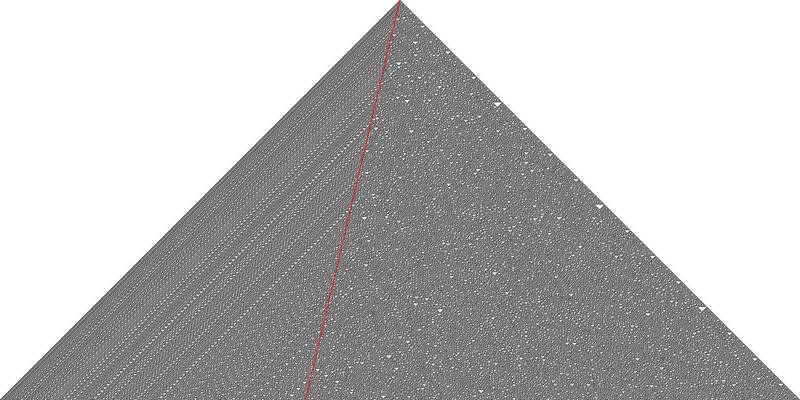 You see yourself, that the line doesn't match any more after 6000 iterations or so.
haruspex
Science Advisor
Homework Helper
Insights Author
Gold Member

Looks like every line of cells parallel to the left edge eventually settles into a repeating pattern. Maybe you could extract the distance (from right edge) to the start of the repeats and the length of the repeat, and plot those against distance from left edge.
dodo

One observation: I tried altering randomly the center cell of each row (all cells directly below the initial black cell) after each iteration; while the patterns on both sides change, there is always regularity on the left side of the triangle, and the divisory 'line' invariably appears at the same place. Altering the center cell to be not random, but constantly black or constantly white, also leaves the 'line' at the same place. (Presumably the line is the effect of the fixed white area beyond the left border of the triangle, as propagated inwards by the rule.)
dodo

If it helps, here are two graphs close to wht haruspex was asking. The first is the ratio you look for, the second is the length of the repeating pattern on the diagonals parallel to the left border. Both as a function of vertical distance from the top. Constructed by the method haruspex outlined: detecting the moment when the repeating pattern (of lines parallel to the left border) breaks. 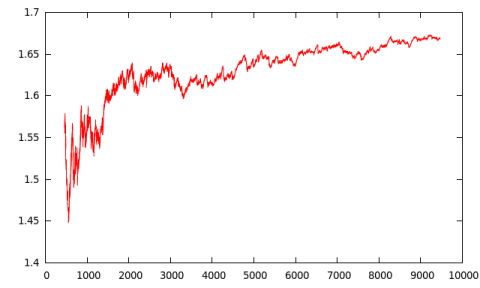 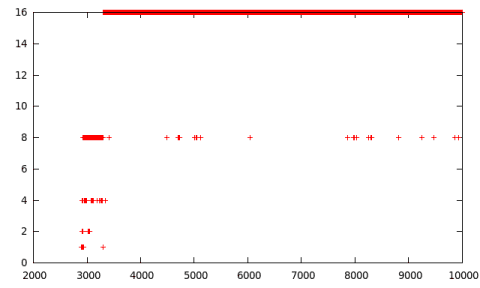 Thanks Dodo, that's intriguing. It looks like all repeats are length sixteen (some just happening to consist of a repeated pattern of some shorter length). That sounds like something that should be provable.
Asynsis

Intriguing results.
As an architect and designer I've been following the relationships between CAs and the Golden Ratio since my student dissertations back in London at the Computer Science and Engineering faculty of the University of Westminster in the mid-90s.

I speculated then that there was a likely relationship between the "sensitively dependant" CA regimes on the "edge of chaos" and the Golden Ratio, which I now develop on in the following blog: http://asynsis.wordpress.com

Asynsis is a neologism meaning "asymmetrical creation"
(more on http://www.quora.com/Asynsis).

I believe that Conway, Langton, Kauffman, Bak and Wolfram are all on the same
track when they describe CAs in this transitional domain.
That the "edge of chaos" regime is the most creative and persistent for
a very simple, elegant reason - one that links a law of beauty with one of optimisation.

There is a believe, also a strong link with the new universal Constructal design law of nature and culture as well, where nature evolves to flow currents of energy, matter and information more easily, with greater power over time. The geometrical signature of these behaviours can also be expressed as the Golden Ratio iterated over time. In the Asynsis blog, I also cite a 2006 proof of my further speculation that the Golden Ratio, or Phi for short is imbedded in the Feigenbaum diagram or Logistic map of bifurcations modelling systems expressing both chaotic and ordered regimes.
So what we have is a new classical-scale theory of everything based on the geometric constant of Phi, where nature self-organises itself and builds complexity in numerous permutations that can be traced back to the Golden Ratio - the archetypal fractal.
We begin to see how nature allows design to emerge analogically and optimally from entropy.
Log in or register to reply now!

Related Threads on Rule 30 and The Golden Ratio

I 360 degrees and the Golden Ratio

Trignometric and hyperbolic equalities: Why the golden ratio?

Relationship between triangle and golden ratio