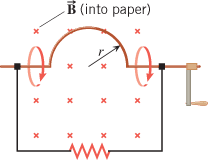 1. A loop of wire has the shape shown in the drawing. The top part of the wire is bent into a semicircle of radius . The normal to the plane of the loop is parallel to a constant magnetic field of magnitude 0.75 T. What is the change in the magnetic flux that passes through the loop when, starting with the position shown in the drawing, the semicircle is rotated through half a revolution?

But I am unsure how why the final angle is 180 such that you get a flux that is negative as calculated below. I guess I just cannot conceptualize WHY the the angle is 180 degrees when the wire goes through half of a revolution. I mean, when it goes through this half-revolution, the plane is still parallel to the screen of the computer. Thus, isn't the angle between plane of the computer screen and the magnetic field (which goes into the screen of the computer) still 0?
Last edited: Mar 10, 2013

The attachment isn't viewable. Can you try to attach it again.
lovelyrwwr

Yes here it is thank you!
Doc Al
Mentor

Wow - I pay for chegg to understand solutions to problems. It misled me to believe that it had to do with angle.

A
Quick question about magnetic flux