While studying my E&M course I asked my myself the question: why do the sides of magnets of same pole repel and opposites poles attract? I just can't manage to answer that question. I'm sure there is a very simple answer... Can someone help me with this?

Yeah ok, but there must some explanation based on what we know? I mean not in the deep sense but based on the theory we know now. For example, we know that two charges of opposite sign attract each other because each one sets up an electric field and the force on each charge is given by [tex]\overline{F_e}=q\overline{E}[/tex].

Maybe it has something to do with the magnetic field?
Nickelodeon

Magnets are like whirlpools. If you have two adjacent whirlpools whirling in opposite directions (one clockwise the other anticlockwise) then they will move apart. Whirlpools in the same direction will merge. I think that is the general idea. Instead of water you have to substitute 'magnetic field', a form of energy.
yoran

But isn't there no explanation based on classic electromagnetism that explains this? I mean, analogies are fine but they only explain what happens but not why it happens.
Domenicaccio

While studying my E&M course I asked my myself the question: why do the sides of magnets of same pole repel and opposites poles attract? I just can't manage to answer that question. I'm sure there is a very simple answer... Can someone help me with this?

You can see a magnet as having a current constantly flowing on its surface, following the same direction ("right-hand" rule) as the South-North direction of the magnet, i.e. the direction of its momentum.

Now you can actually stretch the view and imagine that the 2 magnets are not so different from 2 looped wires with a current. (If you look at the magnet from above its north pole, you see its current going counterclockwise.)

Well now if you put the 2 magnets on top of each other (the top magnet's South pole facing the bottom magnet's North pole) you have 2 currents facing each other and flowing in the same direction. You should know what happens -> they attract each other.

Turn the top magnet upside-down, now both North pole facing, and you have 2 currents in opposite directions facing each other -> they repel each other.

For an explanation of why the Lorentz force is like that, this is really the point where you need to get insider info from God :)
yoran

Allright. I have one question though. You say that you can see a magnet as having a current constantly flowing on its surface. Is that also physically true?
Dumbledore

I've studied a bit further today and indeed, it appears that when you have two conducting wires with a current in the same direction, they attract...
Domenicaccio

Don't get confused, just because opposite ELECTRICAL CHARGES attrach each other, that doesn't mean anything else in the universe attract when opposite...

To verify that, you can for instance

1) think of a single straight wire with current I, and visualize the lines of force of the magnetic field B generated by such wire (if you draw the wire as a vertical line on a paper thus dividing the paper in 2 halves, with I going upward, B "enters" the plane of the paper on the right half and "exits" the paper on the left half)

2) imagine a second wire parallel to the first with current I' in same direction; the second wire is immersed in the B generated by the first and therefore subject to a Lorentz force directed as "I' x B" which is always towards the 1st wire

3) if you invert the sign of I', obviously the force is directed away from the other wire

If you have the possibility of getting a big wire with a huge current in it, you can see it for yourself by for example hanging the wire in the air at one point (e.g. a hook on the wall), and place the two halves of the wire (one half going to the hook and other coming back) so that they are parallel and fairly close to each other. Then SWITCH ON the current all at once, and you'll see the two half-wires KICK each other away for a second.

I am not sure about this last note, but I think that the repulsion can also be explained in terms of the usual tendency of physical systems to seek for the minimum energy configuration.

Think of a closed circuit made with flexible wire, so that you can shape it.
- Initially shape it thin and long so that the area is minimal.
- Place it on a frictionless surface (i.e. ice).
- Turn on the current.
You should see the wire spontaneously rearrange its shape until it becomes a circle.

I believe this has something to do with minimizing the magnetic energy density in the space around, but I hope someone else can demonstrate it...
Domenicaccio

yoran said:
Allright. I have one question though. You say that you can see a magnet as having a current constantly flowing on its surface. Is that also physically true?

When talking about magnetized materials, one common interpretation is that all the microscopic (i.e. atomic) magnetic momentums become aligned. If you could "see" the electrons orbiting the atoms, looking at them from the north pole you'd see all of them rotating counterclockwise.

Even if there isn't any electrical charge free of moving in the material, there is a net surface current resulting from summing all the microscopic circular "currents" (the orbiting electrons).

(here a picture would be great...)

You can get a mental image of those tiny loops "negate" their neighbors, so that there is no net current WITHIN the magnetized material.

But the loops close to the surface don't have neighbors, and therefore their "surface side" isn't negated and contributes (all in the same direction) to the overall surface current.

The magnetization surface current is not free... you cannot "extract" it from the magnet, it's BOUND to it, because it is not made of free charges.
Nick89

I quickly drew up an image illustrating Domenicaccio's post above. 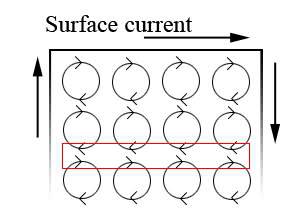 If you imagine the circles as tiny circular current, you can see that on the surface of the object, all the currents add up to one 'large' current.
Inside the object however (for example, in the red rectangle) the currents all cancel out because they flow in opposite directions.
yoran

B
Questions about magnetism

Question about electricity and magnetism

B
Question about magnetism and electricity