Size of planet with 1/50 gravity of earth

This actually brings to mind a certain idea I once had of an ice moon orbiting a massive planet.

The idea began with my observation of these little pointy projections from the top of some of the ice cubes in my ice cube tray, which I figured were the result of tiny droplets of water in the middle of the cubes that, although below the freezing temperature of water, couldn't freeze due to the lack of room available to expand and crystallize due to the fact of its being surrounded by water that had earlier frozen. As the surrounding ice crystallizing would place a pressure upon incompressible water, the water would have to find a way out of this situation by exploiting any sort of fissure within the surrounding ice. As upward is the only way out not blocked by the inside of the tray, and straight up is the shortest distance to the surface from the center, these little geysers always show up right in the middle of the cube, and of course they instantly freeze, as the water is already below the freezing point of water.

An ice moon orbiting a massive planet in a highly eccentric orbit would experience massive tidal forces which might generate internal frictional heating sufficient to melt some of the subsurface ice, which would then undergo a process similar to that which I observed in my ice cube tray, leaving a surface full of conical mountains, whose height, of course, would depend on the radius of the planet corrected for the density of ice.
D H
Staff Emeritus
Science Advisor
Insights Author

BadBrain said:
And for a different density, you could complete the equation by plugging in the absolute density, or by ignoring the gravitational constant and dividing your final result by the relative density. (In other words, if your density is 0.8 that of earth, your final answer would be 128km/0.8 = 160km.

More likely, such an object would be considerably less dense than the Earth. The Earth has a fairly high density because the high pressure inside the Earth compresses the material inside the Earth considerably and because the Earth has a fairly large iron core. The compression most certainly isn't going to happen on this tiny little planetoid, and a large iron core is rather dubious. If the density was half that of the Earth (the density of continental crustal rock), the planetoid would have to be over 500 km in diameter.

In other words, just about the size of Pallas. Note that Pallas' mean surface gravity is about 1/54 that of the Earth.

Another point of interest: Pallas is not spherical. A rocky object that small just isn't massive enough to pull itself into hydrostatic equilibrium. The planetoid is going to be rather lumpy, and thus so will the gravity field. 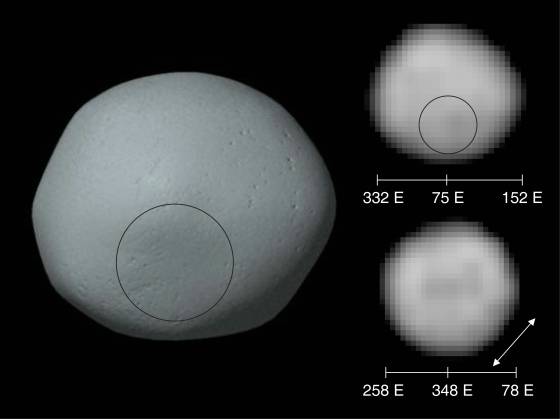 Let's say my ice moon is the same size as earth's moon.

Assuming proportional amount of water at proportional depth of ice, and ignoring effects of atmospheric resistance, my observed "ice volcanoes" in my ice cubes were about 3mm high, so the volcanoes on my moon would be 3mm/0.045 = 66 2/3mm.

(OK, so they're not exactly the Himalayas!)
BadBrain

Which brings me back to my original question:

BadBrain said:
By the way, what's the limit for mass and/or radius of a body to be gravitationally compacted into a sphere? (I used to know it, but I forgot.)

Density seems, to me, to be the only factor that can explain the reason what there's no such thing as a gasbag planet with the radius or mass of earth, in that any gasbag smaller than a Jupiter-class planet wouldn't be able to cohere, and the gas would simply bleed away into interplanetary space. (In other words, why is Saturn, the smallest gasbag in our solar system, 95 times the mass of earth (as I accept that Uranus and Neptune are more properly described as icebags)?) In yet other words, why does the lesser density of gasbags appear to require greater mass than mineral planets by orders of magnitude in order to form a coherent planet (assuming our solar system to be typical)?
Log in or register to reply now!

Gravity on a Planet Sized Ring

Escaping gravity of a planet

Why does the earth and the sun and other planets have gravity?

I If Earth collided with another planet

The Earth's Electric Field and the size of Dinosaurs.

Does a Gravity of a planet determine density?

Half the size and mass, stronger force of gravity?