During a harmonic convergence of the major planets does the barycenter ever leave the suns sphere?

Why don’t you do the math? The required data is readily available by searching online.
jim77

This guy gets an A+ for honesty. (and knowing where to ask the question!)
russ_watters
Mentor

jim77 said:
because I'm pretty dumb. I wouldnt know where to start.

Do you know what a weighted average is? How about balancing a balance-beam? E.G., if you have two equal weights, they balance in the center (halfway from each end). If you have one weight twice as big as the other, they balance 2/3 of the way from the light end. You should be able to do such a problem now (though if you really need to see the equation, you can google it).

There is only one other piece of information you need to do multiple planets: it's that once you've computed the barycenter of two objects, you can place all of their combined weight at that location and then repeat the process for a new object against that pseudo-object.
Orodruin
Staff Emeritus
Science Advisor
Homework Helper
Insights Author
Gold Member
2021 Award

Another possible way of proceeding is to type “solar system center of mass” into Google.
stefan r
Science Advisor

Orodruin said:
Another possible way of proceeding is to type “solar system center of mass” into Google.

On average most of the non-sun mass of the solar system is in Jupiter.


jim77 said:
During a harmonic convergence of the major planets does the barycenter ever leave the suns sphere?

I don't know what you have been searching for before, but all the results I got were relevant.
It is also the least you can expect someone to do before asking the question. (See https://www.physicsforums.com/insights/little-excuse-ask-question-cold/)


stefan r said:
On average most of the non-sun mass of the solar system is in Jupiter.

Not on average. It is in Jupiter. It does not change much. The CoM of it is not though, Saturn is worth quite a punch too. However, had the OP done the minimal effort first he would not have had to ask the question in the first place. Also, if you actually do the math, Jupiter's mass puts the Jupiter-Sun CoM just about at the solar radius so the positioning of the other planets (mainly Saturn) are important as well.
russ_watters
Mentor

Orodruin said:
I don't know what you have been searching for before, but all the results I got were relevant.
It is also the least you can expect someone to do before asking the question. (See https://www.physicsforums.com/insights/little-excuse-ask-question-cold/)

Yeah. The search I did put a pretty/definitive picture ahead of the search results!

Also, if you actually do the math, Jupiter's mass puts the Jupiter-Sun CoM just about at the solar radius so the positioning of the other planets (mainly Saturn) are important as well.

Yeah: I made a little spreadsheet for a running tally: 107% for Jupiter alone. Another 59% for Saturn. Beyond that only Uranus and Neptune matter and not enough if Jupiter and Saturn are aligned. Earth's impact is much less than 1%.
OmCheeto
Gold Member

Having captured the approximate planetary positions for another thread last month, I decided to use that data for this problem. 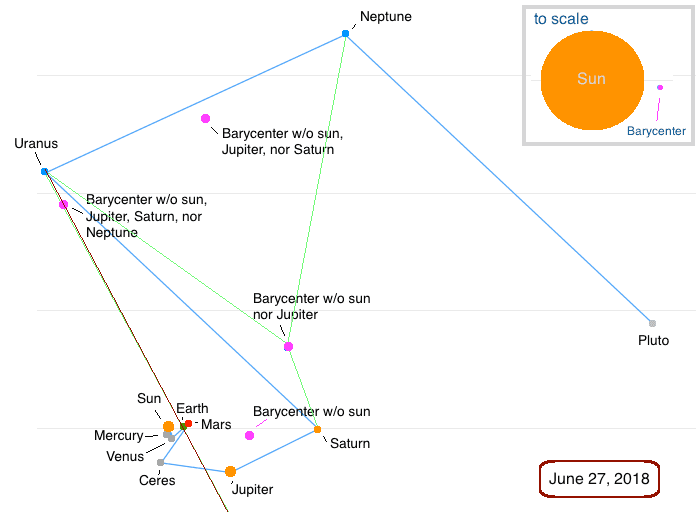 I discovered that the barycenter on June 27th was outside the surface of the sun.
Then I sequentially deleted the Sun, Jupiter, Saturn, and Neptune, to find out the new barycenters, as, it was just fun to do that.

I've not included any values, as I discovered this morning that some of the distances were off by nearly 10%!
But I think it's a good doode-lish representation.

1. Planetary positions were digitized from the NASA's Eyes application.

1.a. Distances can be found at any moment, by right clicking on a planet, then selecting "Measure distance from", and then clicking on the other object.​
2. Digitization was done with @lpetrich 's Image Measurer application.
3. Planetary masses were collected from the internet.
4. Sun and planet (including dwarfs!) sizes are not to scale
5. Distances are to scale
6. Blue lines connect the sun and the planets, sequentially, according to distance from the sun.
7. Digitization:

9.a. I should mention the fact that the first value being zero, confused me; "How on earth can the sun, comprising 99.87% of the solar systems mass, zero out here?"
9.b. Did some maths. It seemed to work out.​
10. Were I better at celestial navigation, I'm sure there are easier ways of doing this. But I'm kind of dumb, so I took the difficult route.​

9. Equation for center of mass was stolen from Wikipedia.

The quantity m1r1 is zero because the because r1 is zero.
OmCheeto
Gold Member

stefan r said:
The quantity m1r1 is zero because the because r1 is zero.

ps.
Here's my favorite application I found yesterday, at the Astronomy Education at the University of Nebraska-Lincoln website, which lets you visualize the effects of the various planets on the barycenter:

Effect of Planets on the Sun

1. No date input. Resetting the application seems to send you to a new random planetary configuration.
2. Guessing they don't include the eccentricities of the orbits. Just a guess!​
Upsides:

"1. Wow! The four big planets really do affect the sun!"

Affect ? In what way? J and S is credible I doubt you can find much of aan "effect" of N and U . Don't forget a barycentre is a centre of mass but it does not possess any mass, so it does not have any gravitational effect. Confounding centre of mass with "centre of gravity" can only be done on human scales where inv. sqr is not significant. ie it works on a lab bench where all gravitation attraction ( weight ) is parallel . Centre of gravity is really a misnomer which causes quite some confusion.

There have been long and heated arguments about the planets orbiting the SSBC but the position of the barycentre is not same and the line of the vector sum of the mutual gravitational attraction of all the other planets on a given body. Nothing is attracted by the centre of mass , so nothing orbits it.

Centre of mass is an m*r calculation, gravity is inv. sqr. m*r^-2 So the contribution of the outer planets, despite being massive is very small in terms of gravity.

The notion of SSBC does not mean much unless you step out to galactic scales and want to regard the SS as a point object and track the motion of its mass as a whole. ie the locus of SS around the galactic centre.

The two body system is a very simple special case where the line of mutual attraction always passes through the BC, so it can be seen as a centre of orbit. It still does not have any mass. Many people arbitrarily assume they can extrapolate that idea to multi-body systems.
Last edited: Aug 6, 2018
fizzy

stefan r said:
The quantity m1r1 is zero because the because r1 is zero.

simply a question of the choice of coordinate system If the reference point is centre of mass of the sun, its distance is by definition zero. All the non zero terms provide the offset of the result from that zero reference.

It does not mean that the Sun has no effect it means it's effect is so large you chose to use it as your reference point.
Share:
Share

A
I Planet at barycenter of a binary system.

M
I Does the barycenter of the Earth-Moon system change?