kumusta said:
@kuruman ... Of course they are, they both have the same order of magnitude

This argument won't stick in physics as it doesn't stick in everyday life. If one's favorite loan shark expects one to pay him back the $75,000 that one owes and one gives him only $15,000, no matter how much one insists that it's the "same order of magnitude", one will end up with broken kneecaps ##\dots~## if one is lucky.

jbriggs444 said:
Are you claiming that two numbers are equal if they share the same order of magnitude? Most traffic court judges would disagree.

Of course I wasn't talking about any two numbers having the same order of magnitude in general. I was talking to kuruman about these numbers given by the OP
in post #1:

I know that they are not equal but for the purposes of my discussion with kuruman, I considered them equal in the first order of approximation. Am I wrong in doing that?
Be that as it may, I'm glad that I don't know how to drive, so I'm sure I'll never have anything to do with a traffic court judge.
jbriggs444
Science Advisor
Homework Helper

kumusta said:
I know that they are not equal

Then I do not understand what point you are arguing and will have to follow the excellent example of @kuruman and bow out of this thread.
kumusta

kuruman said:
This argument won't stick in physics as it doesn't stick in everyday life. If one's favorite loan shark expects one to pay him back the $75,000 that one owes and one gives him only $15,000, no matter how much one insists that it's the "same order of magnitude", one will end up with broken kneecaps ##\dots~## if one is lucky ...

@kuruman ... You know fairly well what we were talking about. We were not arguing about the acceptability of settling a $75,000 debt by paying back only $15,000 , which you mentioned in post #26 and that seem to imply, that according to my own point of view, should be acceptable because they have the same order of magnitude.
Rather, we were talking about the acceptability of two values for two different colors of light. In post #21, you referred to the values (whose positions I rearranged a bit for better viewing) given by the OP:

kuruman said:
Your frequencies are not the same as the ones given by the OP.

You were referring to the values that I used in post #20:

But each color of visible light lie within a certain range of values of frequencies and wavelengths as can be seen below. 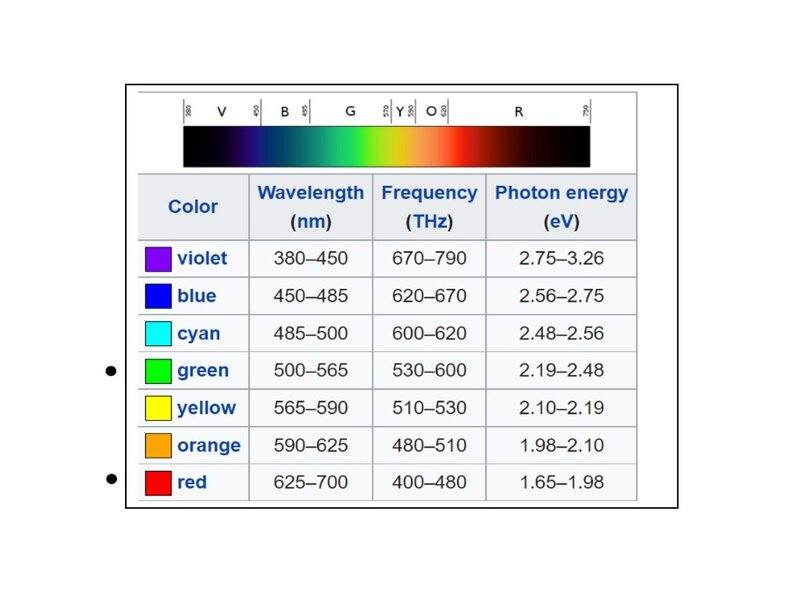 As long as a color remains within its range of recognized values, it keeps its color. I used the average values so they are found at the middle of their accepted intervals. What could be so objectionable about that? Slight differences in numerical values that lie within a narrow range could not possibly produce colors that are drastically different from one another.
But now I noticed also another dissimilarity aside from the slightly different numbers that I used. The OP gave values of frequency in powers of 10 while I used those given in SI units of THz (terahertz). Should that be a big problem to someone already familiar with the numerous physical concepts and principles in physics?
I really don't understand why you always seem to make me appear stupid whenever I noticed any inconsistency in what you are saying. I have nothing personal against you. I just want clear and consistent scientific explanations of things. Remember that you said your aim is to please? I don't want you to please me by accepting what I say that are unresonable and senseless to you. I'm sure that you wont ever do that to anybody. And I also happen to know that I have no right to tell you how to please others who even just want to learn. You should know that yourself. You were a student before.
Share:
Share

Special Relativity: time for light to traverse a rocket