I'm trying to understand the spinning egg phenomenon. That is, why does a hardboiled egg (or any solid ellipsoid) "stand on end" when spun at high velocities. Upon searching the web I found one site written by physicist Rod Cross in Sydney who tried to give a simple, intuitive explanation. The site is: http://www.physics.usyd.edu.au/~cross/SPINNING%20TOPS.htm. I will copy the portion of the site that I am interested in below:
------------------------------------
WHY DOES A SPINNING EGG RISE ?

It is not easy to find a force or a torque that would act to rotate a spinning egg so it stands up on one end. It is almost as if the egg stands up by itself without any assistance. It can’t actually do that. The egg needs some friction at the bottom end. The situation is shown in the following diagram, together with the relevant equations describing its motion. I3 is the moment of inertia about the spin axis and I1 is the moment of inertia about an axis perpendicular to the spin axis and passing through G. 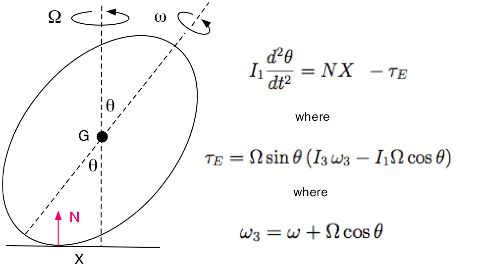 The egg is spinning about its long axis and is precessing about the vertical axis. The vertical force N at the bottom end is about the same as the weight of the egg and it exerts a torque NX about the center of mass G. If the egg is not spinning then NX is the only torque and the egg will fall. If the egg is spinning then the torque NX causes the egg to precess. In that case, the egg can rise or fall or do neither, depending on the magnitude of the second torque term. With steady precession the tilt angle doesn’t change and the second term is equal to NX. That allows us to calculate the rate of steady precession. When friction acts at the bottom end, it exerts a torque about the spin axis that increases the spin and it exerts a torque about the vertical axis that decreases the precession frequency. In that case the second torque term is larger than NX so the egg rises. As the egg rises, the sliding speed of the contact point at the bottom end decreases until it drops to zero. The egg then starts rolling and stops rising. Those effects can be seen clearly in the egg videos. Measurements of the two spins confirms this interpretation.

As I read through this passage there are a few places that I get stuck and can't follow the physics. I am hoping that some of you can help me!


Thank you for making it this far into the post - you are a physics forum champion! I'm sure I will have more questions once I get these sorted out.
Last edited: Mar 14, 2013

A
Egg Safety Vehicle (Egg Drop Project in a car!)

Why does a boiled egg rotates while a raw egg doesn't?