Okay, I'm sure that most of you are familiar with Spirograph. You could make all kinds of neat patterns with it.

Well, the other day I was doing some playing around with my ray-tracer (POV-Ray), and after a while I came up with something that reminded me of one of those Spirogragh drawings (except in this case it was plotted in three dimensions). So I started to do some experimenting and came up with the following: 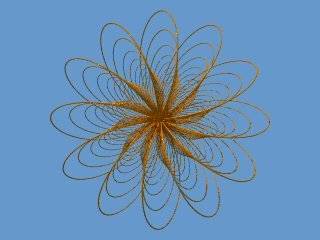 These next two are a little different, as they do not follow the typical spirograph format, but I thought they were interesting enough to include.

You could probably do 3-d atoms with that. Give us an Fe atom. That should be a challenge.
Moonbear
Staff Emeritus
Science Advisor
Gold Member

Oh, so cool! My fascination with trigonometry began when we started plotting graphs of equations and I discovered they looked like spirograph patterns. Suddenly math was really exciting!

I miss my spirograph! Do kids still play with those?
moose

Moonbear said:
Oh, so cool! My fascination with trigonometry began when we started plotting graphs of equations and I discovered they looked like spirograph patterns. Suddenly math was really exciting!

I miss my spirograph! Do kids still play with those?

Ive never even heard of such a thing :/
Ill google it in a second though...
So what was it about?

EDIT:thebeginning Nevermind
I have one of those, just found out that it was a spirograph thing :rofl: :!)

EDIT2:the pen came back
http://www.goriya.com/java/spirograph/spirograph.shtml
woot, I was actually looking for that program a while ago

EHH, that one sucks, I need to find the program I had earlier which actually traced it :grumpy:

Moonbear said:
I miss my spirograph! Do kids still play with those?

I had one, but I'm only a few years younger than you. They were quite hypnotic.
brewnog
Science Advisor
Gold Member

I've got a Spirograph somewhere. My sister sat on the box though, so lots of the pens are missing. Bint.
Share:
Share

3D model of a nuclear reactor

3D model of the Colorado lounge

Another work-in-progress 3D model of mine

3D Origami Paper Swan (HD) Tell me what you think!

How to Make a 3D Origami Paper Snake: Please make your own!