Question statement:
An object of mass m1 = 9.00 kg is in equilibrium while connected to a light spring of constant s = 100 N/m that is fastened to a wall as shown in (figure a): 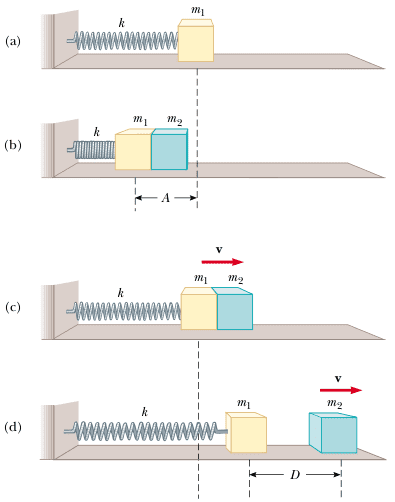 A second object, m2 = 7.00 kg, is slowly pushed up against m1, compressing the spring by the amount A = 0.200 m (figure b). The system is then released, and both objects start moving to the right on the frictionless surface.

A- When m1 reaches the equilibrium point, m2 loses contact with m1 (figure c) and moves to the right with speed v. Determine the value of v.
B- How far apart are the objects when the spring is fully stretched for the first time (figure d)?

The velocity of the second mass would equal the maximum velocity reached by the two objects as they pass the equilibrium point, so:
v_max= Aω= 0.2*2.5 = 0.5m/s

Anything wrong with what I did?

najd said:
[This turned out to be less than 0.2m, is that even logical? I mean, the amplitude decreased after m2 broke free. I imagine it should increase.. even though it looks smaller in the figure.]

I assume the amplitude decreased because the system lost part of its energy as m2 broke free, and so, it would make sense.. correct me if I'm wrong, please.
Share:
Share

Velocity from spring pushing on 2 masses

K
Two masses and a Spring

Two Masses on a Spring

E
Two Masses on a spring

Two masses on a spring

Two masses and a spring