I am curious where they will stack the fairing. I expected them to take it back to one of the mid/high bays, but this article speculates they will stack on the pad:
https://www.teslarati.com/spacex-starship-nosecone-installation-static-fire-success/
Since we are currently in the middle of their first road closure and the live cams show SN-8 is still on the pad, I presume that's correct.
gleem
Science Advisor
Education Advisor

A very large crane is currently moving toward SN8 presumably to place the nose cone on it.
jackwhirl

Looks like a good bet. Nosecone is headed there now, too.
Pic in spoiler. 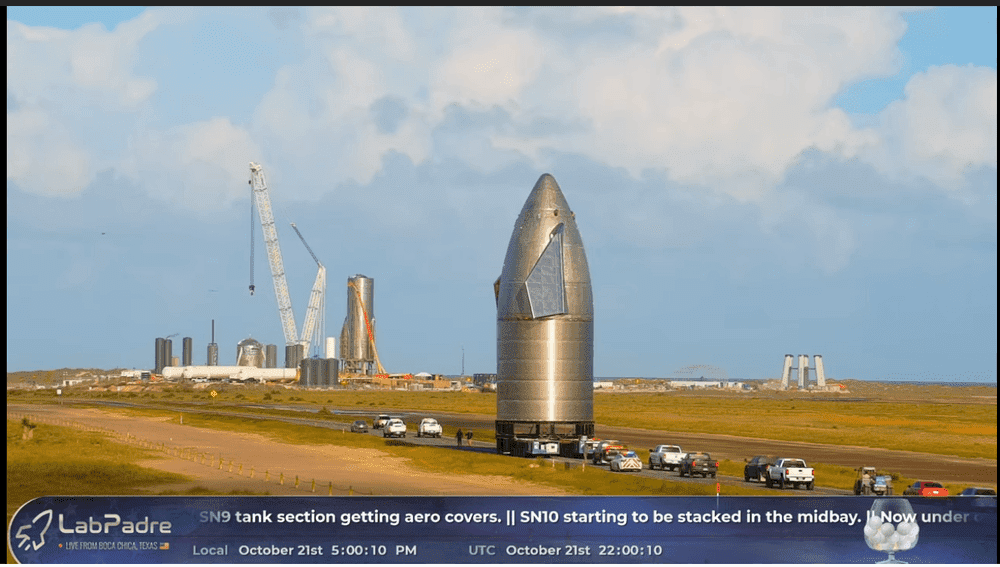 They lifted the nose cone on top of the tank section half an hour ago. Looks like they are welding it together at the moment. 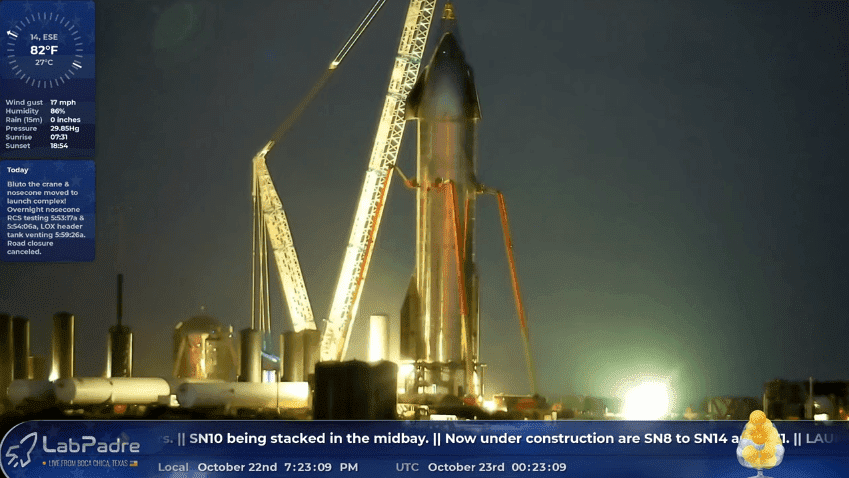 SpaceX is targeting Nov. 9 through Nov. 11 for Starship SN8's flight to 15 kilometers, per the lastest road closures. These windows may also include static fire testing.

Static fire complete.
-18 minutes right now (timestamps in livestreams are awkward) or here on Twitter.
Something flew away, unclear if that was intended or not.

Flight date to be determined, potentially as early as tomorrow but next week is more likely.
This will either make a spectacular flight with a crazy landing maneuver or crash in a spectacular way, either way it will be worth watching.

Edit: People familiar with SpaceX say there will be two more static fires - one with two engines and one with three engines - before a flight attempt. That puts the flight at least two days into the future, and therefore after Crew-1.
Last edited: Nov 12, 2020
gleem
Science Advisor
Education Advisor

Static firing last night did not end well but could have been worse. The test is discussed here.
mfb
Mentor
Insights Author

Musk explained on Twitter that the exhaust broke up the ground and a rock damaged the engine bay. The normal approach would be to simply strengthen the test stand - but remember that this spacecraft is expected to land and take off on Mars, too, where this type of damage is a concern. So they decided to reinforce the spacecraft as well.

A new engine has been moved to SN8, indicating that they don't need larger repairs beyond changing the engine.
They probably need to repair the ground and repeat the static fire test, no time estimates yet. The time isn't lost, SN9 is approaching completion and SuperHeavy makes progress. SN10-12 are in various stages of assembly.
mfb
Mentor
Insights Author

There is an earlier road closure Nov 23/24/25, presumably for a repetition of the static fire test, but the Nov 30 closure reason is explicitly given as a flight.
mfb
Mentor
Insights Author

mfb said:
There is an earlier road closure Nov 23/24/25, presumably for a repetition of the static fire test

Static fire complete. People saw smaller pieces of concrete flying around but there is no obviously visible damage this time.

Edit: Not earlier than Wednesday December 2. One more static fire before that.
Last edited: Sunday, 3:43 PM
Log in or register to reply now!

Estimation of angle of attack / sideslip from flight test data