SpaceX doesn't have a public test plan, but they need to close a public road to fire the engines, and road closures need to be announced in advance - including their reason. In the next days SpaceX plans a static fire (engine fires but the spacecraft is fixed to the ground), and Monday next week (the following days are backup dates) they plan to fly up to 150 meters high. Tweet. As usual: The test might get delayed, cancelled, or the vehicle might disintegrate before. If not, we can get the first free flight of a "real" Starship prototype. Starhopper flew to 150 meters before but it was a much more primitive prototype - walls so thick that it would never make it to space, for example. SN5 doesn't have the payload section attached but that is largely more of the same and it doesn't need to withstand the high pressure the tanks have.

Edit: Cancelled for now. They are working on the hardware.

Not sure if the embedding works. It's a tweet by Musk:
Will attempt to fly later this week
gleem
Science Advisor
Education Advisor

They are now targeting tomorrow - with a backup option the day after.
mfb
Mentor
Insights Author

Hop attempt in ~33 minutes.
Or shortly before the next hour.

Edit2: Looks like it will take a bit longer. Venting reduced, they might remove the fuel, fuel it again and try again.
Last edited: Aug 3, 2020
mfb
Mentor
Insights Author

Another attempt is on the way, the vehicle is being fueled and the engine is cooled down in preparation of a hop. In the chat people think they heard the siren, that would make the launch attempt 10 minutes away. That would be unusually fast, from the fueling I would expect an attempt in ~30-50 minutes.

And it's still standing.

Such a surreal flying object. 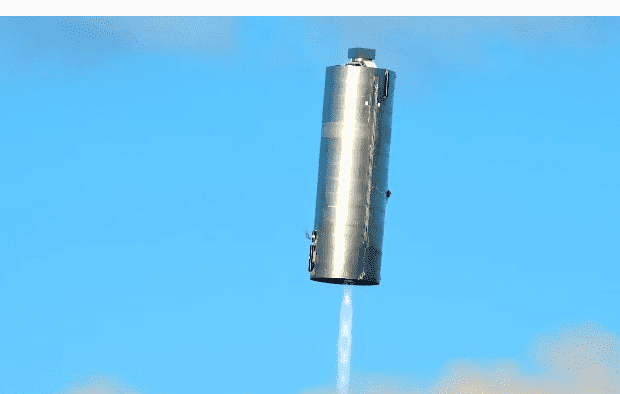 SpaceX released a video of the flight:


Those stubby landing legs are a very preliminary solution, they are working on longer legs, and eventually legs that can land on unprepared surfaces (such as the Moon and Mars).

Jokes aside, they are making impressive progress. Also, the way they work is so different from how conventional wisdom says that you should run large development project.
jackwhirl

Love it. Any word or pictures on whatever was blown off the test stand(?) @ ~12 seconds into the SpaceX video?
mfb
Mentor
Insights Author

Not sure what it was (here are some people speculating), but it might be related to the incomplete structure: SN5 has a single Raptor engine that is offset from the center (the final design will have 3 center engines in a triangle and three outer engines), which means it doesn't launch vertically, it goes sidewards in addition to upwards. That means the exhaust hits some things that are not meant to be hit by exhaust. The launch pad might be quite preliminary, too.

Maybe that's part of what Musk meant by "several short hops to smooth out launch process". They want to reduce the damage a launch does.
gleem
Science Advisor
Education Advisor

What about those flames around the engine as it is landing? Don't think those are supposed to be there. Another item to be smoothed out?
mfb
Mentor
Insights Author

Looks like the launch is the main concern for now. The engines are probably quite robust.

Launch pad views:
From the air
From the ground - some tank wall was damaged

Tweet from Musk, asked when SN5 will fly again:

Not sure yet, but hopefully. Will need leg & other repairs. Probably SN6 flies before SN5. We need to make flights simple & easy — many per day.

SN6 has been moved to the launch pad and tested at cryogenic temperatures to an unknown pressure.
Picture

Most likely the next steps will be a static fire and then a hop while SN5 is inspected/repaired/upgraded.
mfb
Mentor
Insights Author

A hop is planned for Friday or the weekend.
mfb
Mentor
Insights Author

Siren was heard 13 minutes ago, hop could be imminent, but it's also possible that they aborted this attempt.

Successful hop!
With one engine that's not in the center the hops always look a bit tilted, but that's by design. The longer flights will be done with more engines, then the thrust is more symmetric.

Elon being a little optimistic?

They asked for a 20 km flight permission October 11, that's one month from now. It's fast, but nothing too unrealistic. Some fins were spotted on the way to the construction site. Attach all fins, add the nose, get the full Starship to the launch site. By that time the SN7.1 tank might have been tested to destruction so SN8 can start its test program - probably wet dress rehearsal, static fire, and then a flight. Later in October is more likely, even if everything goes right. At some point in October Musk plans to give an update on the status, they'll probably try to make the flight before that.
mfb
Mentor
Insights Author

SN7.1 is being tested right now - the target is a test to destruction. The tank is ~2/3 filled at the time of this post:

SN8 got aerodynamic surfaces, it's getting closer to being moved to the launch pad.


Meanwhile people have spotted the first elements that are clearly part of the first Super Heavy prototype, three stacked rings:

mfb said:
SN7.1 is being tested right now - the target is a test to destruction.

And... it got destroyed. 4:58:10 local time (see the bottom of the livestream)
Looks like the front fell off. The top end of the tank is gone.
gleem
Science Advisor
Education Advisor

If SpaceX is happy with the test result they'll attach the upper half of SN8 (the payload area of future Starships), do another static fire test, and then fly to 15 km.
There is no official public test plan but it's generally understood that this static fire was using the main tanks, whereas the next static fire will use the header tanks (used for landing). One of the header tanks is in the upper section that's not installed yet.
Log in or register to reply now!